Even if you’re a cool hand at the poker table, or in the cockpit, it’s always nice to have an ace up your sleeve. No pilot can have a contingency for every conceivable flight scenario, but having an “out” tips the odds to keep you flush because a bluff isn’t an option.

If you’re flying the Eastern Seaboard of the U.S. and things gets socked-in by heavy fog, you want to have a good out. When I flew turboprops for a Virginia-based regional airline, there were many occasions when the temperature dew point spread kissed and the resulting fog swaddled wide swaths of the Eastern Seaboard in a blanket of low IFR conditions. One memorably misty day, five out of the six instrument approaches we shot were right down to minimums.

My back pocket out was Washington D.C.’s Dulles airport. An expansive airport—it regularly hosted call sign Speedbird, the supersonic Concorde—Dulles had no immediate terrain, highways or buildings near the landing zones of multiple ILS approaches. In the event our destinations and alternate airports defied the odds and all sank below minimums, or we were on fire, we had a place to land. On separate occasions, my turboprop experienced an engine failure, a total electrical failure at night and a flight control issue, so I learned to view each workday with a pilot’s healthy dose of skepticism. If I had to land blind, the long, wide, uncluttered slabs of Dulles concrete was the place to do it. It was my ace in the hole. 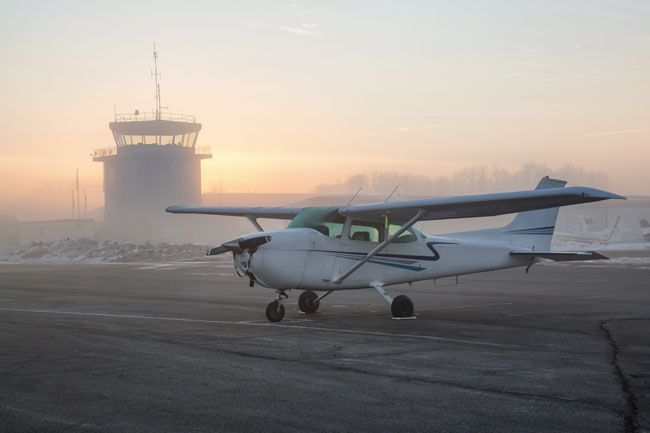 But even on fair-weather summer days, the haze over the East Coast can turn the sky to a murky, disorienting soup. John F. Kennedy, Jr., was a former prosecuting attorney, publisher of his own magazine and, most notably, the son of President John F. Kennedy. In 1998, he was also a private pilot and new airplane owner, who had around 320 hours of total time in his logbook. When arranging a weekend overwater flight to Martha’s Vineyard with two passengers, JFK, Jr., wisely planned to depart in the afternoon, leaving plenty of time to get to the island before dark. It had been a frenzied week for the former New York City prosecutor, tied up in meetings and deadlines for his magazine, George. He also had a leg cast, for a broken ankle, removed only the day before.

Kennedy was actively receiving instrument training, but didn’t have an instrument rating. Flying at night, especially over the horizon-less terrain of the ocean, would be dangerous for any pilot who wasn’t licensed and current to fly by sole reference to instruments. But that July day he made a number of compromising choices, including not taking his flight instructor, who had made the offer to ride along as safety pilot.

Maybe because Kennedy had successfully flown the round trip many times before, both with his instructor and solo—including a few at night—he was confident he could again handle the relatively short hop as pilot-in-command. His situation was a case of initially having an out: a plan to depart early enough to allow ample time to make it VFR overwater to his destination before dark. But that plan was compromised when his passengers ran late. He decided to wait, and by doing so, was forced to push his departure time until sunset. As dusk turned to night, the hazy visibility dropped precipitously, sweeping Kennedy and his Piper Saratoga out of the comfort zone of day VFR and into the unknown of night over-water IFR.

An out only works if you stick with the plan. If you change the plan, you must create a new out.

In SCUBA diving, which shares many elements of flying, the common wisdom dive instructors drill into new students is to always plan your dive and dive your plan. Yet the sea is as mercurial as the sky. SCUBA equipment malfunctions, unpredictable weather ruins underwater visibility, and diver error can quickly force the need to alter the plan. The prudent diver maintains a running escape plan in the back of his mind, an out to use if things go south.

In Kennedy’s circumstance, there were a variety of options he could have used to accommodate a new plan. Depart on time and arrange alternate transportation for his two passengers. Scrap the flight and hire a charter. Wait and depart the next morning. Take a flight instructor. Any one of a number of outs could have altered the outcome. Even once precipitously airborne, he could have used the Saratoga’s automatic wing-leveler.

Flying into deteriorating visibility over water at night without an instrument rating simply left no out. One hour after takeoff, the Saratoga spiraled downward at 4,500 feet per minute into the waters of the Atlantic Ocean. Kennedy, his wife and her sister all died upon impact. The flight became a tragically classic graveyard spiral scenario. The final hole in the Swiss cheese accident model lined up the moment he lost sight of the horizon in the dark.

The idea of full-frame aircraft parachutes as a last-ditch out wasn’t a new idea, but the actual implementation was revolutionary when Cirrus Aircraft included them as standard equipment on every plane that came off their assembly line. Ballistic airframe parachutes are now the biggest in-your-face, last-chance “save” a manufacturer has to offer today’s pilots. The devices have proven themselves over and over as a lifesaving out. But in deadly scenarios like controlled flight into terrain, there is no save. The only out is prevention, by exercising vigilant situational awareness.

When New York Yankees pitcher Cory Lidle and his Cirrus SR20 slammed into a Manhattan apartment building on the Upper East Side, it was probably only the very last split second of his life that he realized he didn’t have an out. Lidle had just four hours of flight time in the used Cirrus he’d recently purchased. As a precaution, he brought his flight instructor along to accompany him on the long cross-continental journey from Teterboro, New Jersey, to his home in California.

It wouldn’t have been a problem if the two pilots had limited their after-takeoff sightseeing to the first landmark they circled, the Statue of Liberty. But minutes later they cruised up the confines of the East River corridor, a narrowing canyon that comes to a dead end at the imaginary fortress wall of La Guardia Airport’s controlled airspace.

When Lidle and Stanger executed a tight 180-degree downwind turn to avoid La Guardia, they forgot one thing: to leave themselves an out. Banked at an insufficient rate of turn, they lost much needed altitude just as their groundspeed increased, locking the Cirrus onto an invisible trajectory with an apartment tower. They impacted the building at only 300 feet above the ground. The NTSB couldn’t determine from the wreckage which pilot was actually at the controls. Like catcher Thurman Munson and pitcher Jim Hardin before him, Lidle became the third Yankees player to die in the pilot seat of his own plane.

Lidle thought he had an out, a big out, by having his flight instructor accompany him on the long-distance flight in an unfamiliar airplane. Then why the tragic ending? Because the game changed. CFI Stanger taught out of California and had no experience with the complex airspace of New York City. He was equally inexperienced in the relatively high-performance Cirrus.

When they made the decision to sightsee up the East River before heading west, the very presence of his instructor may have made Lidle complacent and the very trap he was trying to avoid was instead unwittingly set.

Larger-than-life famed adventurer and entrepreneur Steve Fossett was a commanding expert at having an out. Honed by years of challenging the record books, Fossett was the first person to circumnavigate the earth solo, by balloon. Yet that feat was just one of over a hundred extraordinary records he accomplished in flying, sailing and mountaineering. Who had greater experience predicting and managing winds than Fossett? Not many. So it was all the more peculiar when he disappeared on what was essentially nothing more than a short, local VFR morning excursion. Departing from his friend Barron Hilton’s private ranch airstrip in Nevada, Fossett headed toward the familiar nearby Sierra Nevada mountain range, in a Bellanca Super Decathlon, under clear skies. He was never seen again.

For one year, tabloid rumors swirled that the wealthy risk-taker perhaps faked his own death, closing the curtain on an illustrious life with one last spectacular act, vanishing, along with his millions. But one year later Fossett’s wreckage was located just 300 feet below the 13,000 MSL peaks. An NTSB investigation determined he’d crashed under all too ordinary circumstances, another small aircraft impacting high terrain, probably due to downdrafts he couldn’t out-climb.

If you don’t have altitude to spare over high terrain, then you better at least have lots of available thrust in reserve that can be converted to altitude. Fossett had neither. At 13,000 MSL, it was calculated that his Super Decathlon’s maximum climb performance was limited to 300 to 400 feet per minute, not enough to out-climb any theoretical downdrafts. Some believe he was making a turn and got caught boxed in before hitting the side of the mountain. In either event, Fossett didn’t leave himself an out.

You might think to yourself, well, those pilots were all ego-driven celebrities. I won’t commit their oversights or make their mistakes. Yet over 99 percent of general aviation victims—and they stubbornly persist around 380 fatalities per year—aren’t famous. They’re the rank-and-file GA pilots.

Look, if your engine comes apart 200 feet after takeoff, your options are significantly reduced. But a common thread in these fatal accidents was complacency, coupled with a false sense of security from having an instructor in the next seat (Lidle), by having made the trip many times before (Kennedy) and from a morning hop on a sunny day (Fossett).

An aviation visionary once told me it’s the golden bullet you don’t see that gets you. That was just a few years before he lost his own manufacturing company to bankruptcy. We can all suffer from complacent blindness to the obvious.

Always leave yourself an out. And if your plan changes, make sure your out is still viable. If it isn’t, find a new one fast. Because the most uncomfortable feeling above the world is the sinking realization you’ve boxed yourself into a position where there’s no out left to take.

Kathleen Bangs has over 10,000 flight hours and is a former commercial airline instructor, check airman and 2005 International Aerospace Journalist of the Year. She can be seen on FOX News covering aviation breaking news.