Ahead and to the left, the startling deep, blue Dead Sea waters emerge from the light haze, in jarring contrast to the desolate, brown world of the Judean Desert, over which our airplane has been cruising for the last 15 minutes. I’m flying over Israel, one of the world’s most historic regions. I’m overwhelmed as I try to process the country’s small size and absorb the rapidly changing landscape. With me is my host, physicist Emanuel Binnun, owner of the immaculate Cessna 182RG that transported me from Herzliya Airport, just north of Tel Aviv. The aircraft complied with the published noise-abatement departure procedure at the airport and climbed out in the prescribed stylized circle over the Mediterranean. We had set course to the southeast, first over city sprawl, then above the greens of farmland shoehorned into every available flat space.

Quickly (for someone used to the large distances between U.S. cities), we’re over Jerusalem, and ATC approves circles over the city, so long as we don’t venture below 9,000 feet MSL into a prohibited area. I open the side window and shoot pictures of the compact and long-fought-over old city, the Temple Mount and the golden Dome of the Rock. Rolling out to continue southeast, we see the land change to desert on the east edge of Jerusalem—as if a line had been drawn—and all trace of vegetation abruptly vanishes.

Approaching our first destination, the Cessna’s nose tips down as ATC clears the descent. Every flight over Israel—VFR or IFR—involves clearances and controllers. In a country surrounded by heavily armed neighbors, it’s no surprise that all airspace belongs to the Israeli Air Force (IAF), and security is a constant fact of life. Getting past the motion-sensing security fence that encloses Herzliya Airport necessitated a lengthy interrogation by one guard while another watched me with an Uzi. I couldn’t help but wonder how flight schools go about attracting prospective students.

Descending with our speed nudging the yellow arc, we parallel the rugged bluffs and canyons that jut skyward just west of the Dead Sea’s shoreline. Our destination is the reopened airstrip near Masada, the ancient mountain fortress where 2,000 Jewish rebels denied victory to hardened Roman legions five times their number.

Despite knowing that the runway ahead is the lowest on earth (more than 1,300 feet below sea level), it’s still disconcerting to watch the altimeter blast through zero while descending at 700 fpm.

After landing on the windswept runway, Binnun introduces me to Ali, a Bedouin responsible for reopening the airport who provides aerial sightseeing tours over Masada. Ali has erected a tent of the sort found in the desert with comfortable low couches and western-style tables and chairs. I learn that while Americans fly out for a $100 hamburger, in Israel, the destination lunch of choice is hummus, some delicious cheese and a collection of fresh vegetables and sweet tea or Turkish coffee. If we wish to stay, there’s ground transportation available—our choice of car or camel.

While enjoying lunch, the sighing of the wind past the corners of the tent is broken by the sound of approaching jets. We zip outside, barely in time to see two IAF fighters scream past at about 100 feet AGL. I’m told that had we arrived earlier, we would’ve seen C-130s practicing assault landings on the airport. As a result of the military presence, I’m not the least bit surprised when Binnun uses his cell phone and calls ATC to obtain our VFR clearance before even starting the engine.

Back in the airplane, my suspicion that a takeoff from below sea level will result in some impressive performance is confirmed. The 182RG leaps off the ground and climbs to sea level (still a strange notion) in just over a minute. We tour much of the northern half of the country in the next hour and a half, flying along the Dead Sea (okay, it’s really a big lake), the Jordan River and the Sea of Galilee (a medium-sized lake).

I’m flying over Israel, one of the world’s most historic regions. I’m overwhelmed as I try to process the country’s small size and absorb the rapidly changing landscape.

Even though we’re operating CVFR (the C stands for controlled), we must follow a published route. Just pointing the airplane where we want to go isn’t an option. We’re assigned an altitude, usually at least 2,000 feet AGL, in conjunction with the published route—designed for us to stay away from densely populated areas. Should I want to train with an instructor, I would file my CVFR flight plan at one of the designated practice areas. I would communicate with a controller at all times and would be the only airplane in the practice area. When the time comes for a checkride, I must file a flight plan describing where I intend to fly at least 24 hours beforehand, and get the route approved. This is especially important for the commercial flight test where one must demonstrate flight at about 500 feet and navigation by chart away from published airways. 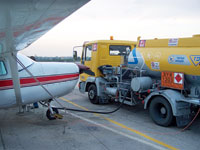 As we proceed, we’re handed off from one controller to another. Normal air traffic communication is conducted in Hebrew. If an English speaker comes onto the frequency, however, the controller and all of the pilots switch to English so everyone can keep track of each other.

In order to fly as pilot-in-command of an Israeli-registered aircraft, one must hold an Israeli pilot certificate. Fortunately, a visitor to Israel can rent an airplane and take dual from an instructor—an ideal way to get a feel for this stunning country. Prices are high compared to those in the United States—a Cessna 172 rents for about $215 per hour, with an instructor running a little over $70 per hour. Aviation fuel costs about $6 per gallon, roughly the same as automobile fuel. As for landing fees, at Masada they were just under $30. Binnun pays a flat annual fee of $800, which covers his tiedown and the landing fees at all of the public airports.

As in the States, Binnun must take a flight review every two years. To keep his instrument rating, he must take an annual checkride with a government examiner. The only airport with instrument approaches is Tel Aviv’s Ben Gurion International, so checkrides require some coordination.

As we circle one of the numerous Roman-ruin sites, the conversation turns to other comparisons with the United States. Binnun explains that, in addition to the annual inspection on his airplane, regulations require that it also undergo all of the scheduled maintenance called for in the manufacturer’s service manual—specifically, the 50-, 100- and 200-hour inspections. Also, when he parks his airplane, he must lock a heavy steel “boot” arrangement to the nosewheel, in compliance with some bureaucrat’s idea of security.

As evening draws near, we fly south along the Mediterranean coast, not wanting the magical experience to end. Binnun has one more surprise—a touch-and-go at Sde Dov Airport, where I get the incredible vista of a 500-foot-tall smokestack only about 200 yards away from the thresholds of two of the runways. It’s a small country, and sometimes that means unusual juxtapositions.

Finally, it’s back to Herzliya where, on final, I see that airplanes are crowded cheek by jowl, a reminder that general aviation is very much alive here.

From Roman ruins to lush agricultural land and from harsh deserts to the lowest spot on the planet’s surface, Israel is a true delight to experience. And the best way to get a feel for this small country in a short time is in a general aviation airplane.