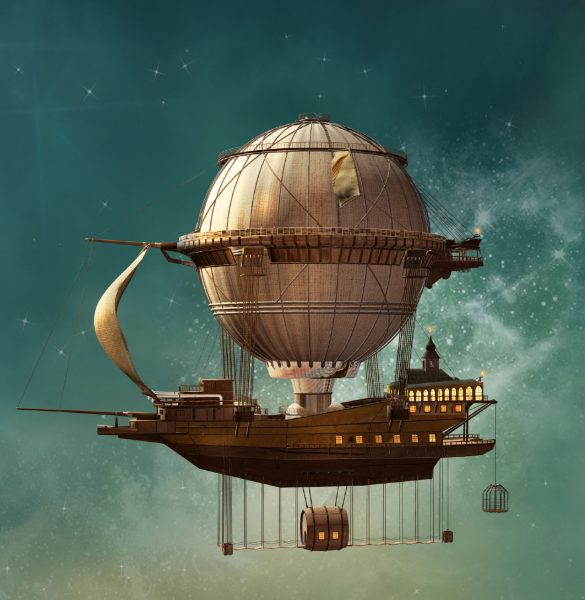 In the late 1890s, strange airships started being spotted sailing across the country’s skies. While lighter-than-air airships had been around since the 1850s, their capabilities were far more limited, and they were not nearly as big as those being observed. Witnesses described the ship, or ships, as being 150 to 200 feet long and moving at speeds of roughly 135 to 150 mph. Airships at the time were generally smaller and only moved at speeds of around 5 to 7 mph.

The first sighting occurred in November of 1896 in Sacramento, California, when hundreds of witnesses observed a steady light attached to some kind of large vessel pass across the sky overhead. Some said they could hear voices singing from the ship. One witness, R.L. Lowery, told the news that he could hear a man issuing out orders, “Throw her up higher; she’ll hit the steeple!” According to Lowery, the airship had a cigar-shaped body with wheels at the side and appeared to be powered by two men seated on a bicycle-like frame.

Over the next six months, the sightings moved eastward across the country, with reports as far as Chicago. In total, there were approximately 150 sightings in roughly 20 states. Then, in April of 1897, just as suddenly as they had started, the sightings came to an abrupt stop. While many accounts can be written off as hoaxes, mass hysteria or even the misidentification of astral phenomena, such as comets and meteors, a handful of accounts were credible enough to generate some, er, lift.

For the most part, witnesses describe the occupants of the airships not as human but as human-like. The first possible evidence for little green men occurred just a few days after the Sacramento sighting, 50 miles north in a town called Stockton. Colonel H.G. Shaw was driving his buggy through the countryside when he stumbled upon a landed spacecraft. According to Shaw, the vessel was roughly 25 feet in diameter and 150 feet long. It had a metallic outer surface and, other than what appeared to be a rudder, was completely devoid of any additional external features. He observed three strange, slender creatures moving about the aircraft emitting a “strange warbling noise.” The creatures approached him and attempted to force him on board, but the Colonel, obviously being a strong, brave man and totally not embellishing his story at all, quickly overpowered them and fled.

Another account a bit out-of-this-world was reported by the Dallas Morning News the following year, in April of 1897, after an airship was spotted crashing into a windmill. The mangled wreckage was described as being a mixture of aluminum and silver, with bizarre hieroglyphic-like drawings scattered about in the debris. The pilot, deceased, was allegedly “not an inhabitant of this world.” In 1973, a group of UFO investigators located the crash site, which apparently contained the pilot’s grave marked by a headstone. Their metal detectors picked up evidence of foreign materials under the surface, leading them to request permission to excavate. The request was denied. When they revisited the location a few years later, the headstone and all subsurface metals were gone.

The existence of extraterrestrials may be entertaining to mull over, but also tantalizing is the existence of mysterious inventors creating mysterious things. A San Francisco attorney, George “Airship” Collins, claimed to represent an anonymous inventor who allegedly conducted his test flights at night in order to avoid detection. According to Collins, the airship was 150 feet long and able to carry a load of 15 passengers. As he told the press, “It was built on the aeroplane system and has two canvas wings 18 feet wide and a rudder shaped like a bird’s tale.” But, failing ever to produce this mysterious inventor and growing tired of public ridicule, Collins later recanted his claims.

While Collins may have been telling tall tales, it doesn’t mean that others weren’t hard at work building and testing airships. In 1884, a 165-foot battery-powered airship made a successful 5-mile, 23-minute round-trip flight in France. The flight proved that safely controlling an aircraft was possible with a powerful enough motor. However, its flight range was sharply limited by the battery life, and its top speed was a mere 6 mph, making it far slower and less robust than the airships being spotted across the U.S. And it is hard to imagine the building of such a giant flying structure being done in secret. But it’s not impossible. Then again, perhaps this was all just…

If one thing hasn’t changed much in the last 150 or so years, it’s the media and its lust for sexy headlines. “Yellow journalism” was in full swing in the late 1800s, with reporters regularly embellishing and even fabricating stories to boost sales. While many people may have truly believed they saw something sailing by overhead, was it really an airship? Or was it instead something less fanciful, like a comet, meteor or even a planet? Unfortunately, the only available witness accounts are those published in the newspapers of the time, making it impossible to parse out fact from fiction.

It’s possible that at least some of these sightings were the result of an inventor, or possibly multiple inventors, testing controlled, powered flight in airships. Even the “alien crash” report in Texas can be given some weight if you consider the possibility that the so-called extraterrestrial remains were actually a human body burned beyond recognition. Yet the abrupt stop in sightings makes the involvement of multiple inventors unlikely. While the initial airship sighting in Sacramento had enough witnesses and detailed, consistent reports to make it credible, the rest were likely just the product of hoaxes, imaginative reporters and others filled with hot air. Still, all things considered, there is plenty of mystery left in this one to go around.