“Oh, sorry, that hasn’t worked for a while,” the pilot said when he noticed I was trying to tune the DME in his aircraft while flying a couple of instrument approaches for his currency.

“What do you do when you fly an approach that requires DME?” I asked him, hoping the answer was that he didn’t do those since it wasn’t working.

“Well, I don’t actually do many IFR approaches, but when I do run across that situation, I kind of rely on this,” he said, as he pointed to his yoke-mounted portable GPS.

This led to a longer discussion about why it wasn’t appropriate to use noncertified equipment for instrument approaches, but it also highlights something I see many times: pilots leaving equipment inoperative in their aircraft instead of getting it fixed or having it removed.

This is just one example of the many times I’ve found pilots with something broken in their aircraft that obviously had been inoperative for a significant period of time. They have “learned to live without it.” Unfortunately, it causes them to either degrade their capabilities or rely on equipment not properly certificated to get the job done.

It’s easy to let this happen. I’ll even admit I’ve done it in aircraft I’ve owned, even though I know better. It’s expensive to get things fixed or replaced, but not doing it can lead to bad habits, or worse.

When something breaks, say a panel light burns out, and we don’t find it critical to our typical flight, we tend to ignore it or at least delay fixing the problem. In fact, many times as pilots we “learn to live without” certain things that just don’t work on our planes. Doing this increases the risk we encounter on every flight. These risks can range from conducting flights with less than ideal equipment resources to potential electrical fires or even failure of flight-critical systems. 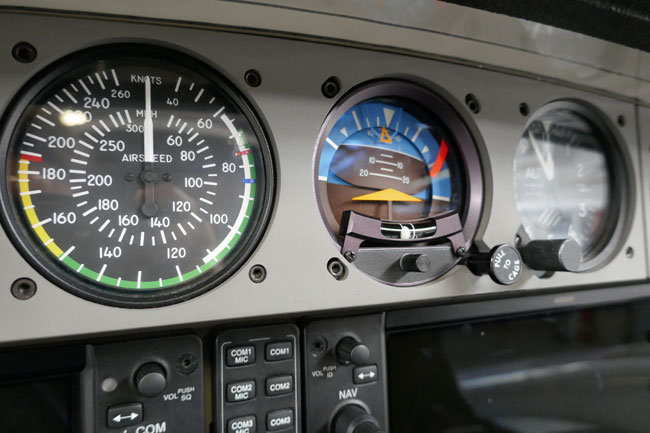 Some of the most common things I see left not working include second navigation and communication radios, DMEs, ADFs, panel lighting and interior lights, to name a few. But I’ve also seen aircraft being flown with nonfunctional turn coordinators, and even flap motors and gear lights.

There are certainly things that pose greater risks than others when left inoperative, but anything left uncorrected poses a risk to the flight, which should be mitigated. Inoperative equipment leaves a pilot with fewer resources to complete their intended flight operations. A nonfunctional DME leaves a pilot potentially forced to complete an instrument approach with noncertified equipment or without all of the required information. An inoperative second glideslope indicator leaves the pilot without the backup for the primary glideslope indicator if it fails, the reason it was put in the aircraft in the first place. An inoperative light above a CHT gauge may leave the pilot unable to notice a developing problem if the temperatures are rising and it goes unnoticed on a night flight.

While leaving less critical equipment such as a panel light nonfunctional may not seem like a big deal, it may indicate a more serious problem. For example, the reason for a failure of this could be a bulb, or it could be an indication of something shorting out. If that’s the case, it could result in a bigger problem than just a faulty light, such as an electrical fire.

In a recent example, a fellow examiner called me about a student he was going to be doing some flying with, asking questions about a specific turbocharged aircraft. Something seemed off to him when the student told him that he was experiencing rising cylinder head temperatures, but that if they just turned on the “hi-boost” pump the problem went away. For an aircraft engine that was normally to be operated on a “low-boost” fuel pump setting, the fact that the “hi-boost” needed to be turned on when it was intended more for emergency or priming purposes shouldn’t be a normal flight procedure. The owner had “gotten used to” doing this because it solved the problem. But it doesn’t actually solve the underlying cause of the problem, which is probably indicative of something more serious that’s developing and is now being masked by a nonstandard pilot action that has become part of his “normal” flight operations. The examiner friend of mine has now strongly encouraged the aircraft owner to seek maintenance support before continuing any additional flight operations.

A potential side effect of “learning to live with” some things not working is that it develops complacency in the pilot and the changes in our behaviors may mask developing or more serious conditions. This may lead to a tendency to fail to address more critical systems failures based on a habit of getting it done with less than available equipment functioning.

What should a pilot do when there’s inoperative equipment in their aircraft? Well, I typically advise owners to actively follow a 3 R’s approach: repair, replace or remove.

Repair. If something is broken, talk with your maintenance provider and get it fixed. Fixing a broken piece of equipment ensures the pilot has all the proper resources available to them in the aircraft and limits the risk that an inoperative component could result in greater problems. I know there’s a cost associated with doing this for everything that’s broken, but the cost of not fixing it could be more than money; it could become a matter of safety.

Replace. When something is broken, it may not be the best idea to simply try to fix it. Some equipment is harder to fix, and replacing it may be necessary. Older equipment is getting harder to always directly replace and may be an opportunity to replace and upgrade at the same time. Is that old KX170B radio not working in your instrument panel? Why not upgrade it to a modern GPS/Nav/Com unit that fits in the same position and will upgrade the capabilities of your aircraft?

Remove. In some cases, there really are items that can be removed. Most of us aren’t flying NDB approaches anymore, especially if we have an IFR-capable GPS in our aircraft. If your aircraft has a nonfunctional ADF in it, have it removed at your next annual to eliminate the potential that whatever is causing the device not to work properly could cause other problems. Some things will never work again. Still have a LORAN in your aircraft? No matter what your avionics shop does to it, it isn’t going to get a signal since the towers have long been turned off. Removing inoperative, unused and unnecessary equipment will mitigate any potential risk it presents and clean up your panel, and it also will give you back a little weight and balance. If you have equipment that’s really not being used, consider removing it from the aircraft completely as a viable option.

So what’s the worst thing I have seen “let go,” you may ask? Well, there have been a wide variety of things, but I definitely remember the checkride I showed up to do, only to find that the pilot had taped down the circuit breaker for his alternator. When I queried why the alternator breaker was taped down, the answer I got was, “It keeps popping; the tape keeps it from doing that.” My mind quickly imagined all the potential problems that could result from not allowing the breaker to do its job, the first in my mind being an electrical fire. I followed this answer with a discussion of the potential problems this could be masking and the risks that were present with a breaker that was popping that was forced to be held in place and not allowed to do its intended job. Obviously, we didn’t complete the checkride until the problem was fixed.

Jason Blair is an active single and multi-engine instructor and FAA Designated Pilot Examiner with 4,900 hours total time and 2,850 hours instruction given. In his role as Examiner, over 900 pilot certificates have been issued. He actively works within the general aviation industry and actively flies volunteer missions.