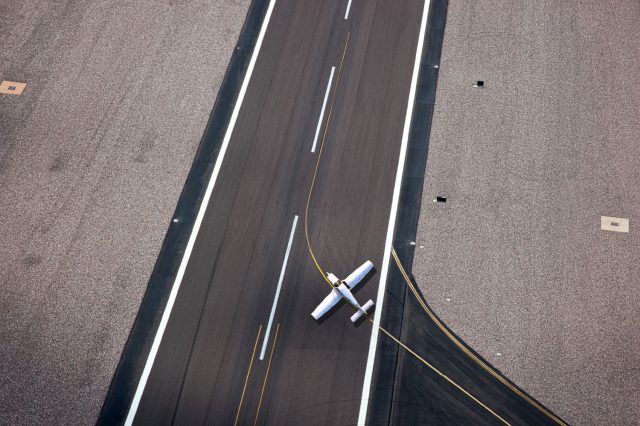 “Cessna 1234, can you accept an intersection departure from Bravo, remaining runway, 5,200 feet?” the controller inquired as much as instructed.

“Sure,” I thought. It’s plenty of runway. We actually based the Cessna 340 I was flying on that day at a runway that was only 3,900 feet long. So, yeah, I had enough runway. But should I accept that clearance, I thought for a moment.

I actually declined and asked for a taxi for the full length.

It’s a habit I’ve gotten into over the years, choosing instead of departing downfield, even when enough runway is available, instead of giving myself the full length of the runway for my takeoff.

Is it really that big a deal? Most of the time, no. But when it is, it REALLY is.

I can’t help but remember any number of older pilots who have shared the phrase that, “There’s nothing less useful than the runway behind you, the air above you and the gas you don’t have,” for a pilot and their aircraft. We may be a little tired of hearing the phrase, but there’s truth in all of the points.

Focusing on the “runway behind you” part of it here, I can’t help but think just how much better of a practice it is to use a full-length runway whenever it’s possible—even on a really long runway.

In one personal experience, I rolled out onto a nice, long runway, fully applied power and, just after liftoff, smelled smoke in the Piper Seneca I had just picked up from a bunch of avionics work. Not feeling like continuing the takeoff with a fire, I was more than pleased that there was sufficient runway to abort, settle back to the runway, and stop with sufficient runway remaining. Had I taken off with less than full length, this might not have been an option.

In another case, I had the opportunity to review a runway incursion that the FAA Runway Safety Council was studying. A tower controller had cleared a regional jet for takeoff (full length) and then a Pilatus for departure on the same runway from an intersection. The controller didn’t connect the dots in the sequence, and it actually resulted in the Pilatus pulling in front of the regional jet and a near miss. Had this Pilatus pilot declined the “intersection departure” and instead taken the time to taxi to the full-length departure end of the runway, this would’ve been avoided. Sure, the controller missed the concern here also, but a savvy pilot wouldn’t end up in that potential conflict by making it a practice to just use the full length of the runway for departure.

I could probably come up with lots of examples where a full length of the runway will put a pilot in a safer position than accepting a downfield departure, but most of us already know that.

The question becomes, why don’t we just do it all the time, then? Why do we actually end up doing “intersection” departures, giving up valuable runway real estate we hopefully won’t, but may someday, need?

In most cases, it’s to expedite our operations or speed up our departure. In some cases, it’s to make taxiing easier. In almost every case, it’s a question of patience.

At bigger airports, there may be pressure from ATC to “get you out of the way” by giving you a departure and avoid taxiing you across active runways, behind other traffic or nearby busy gate areas, where commercial aircraft are transitioning in and out. That’s okay, and I get it, but it doesn’t mean you have to compromise your operational safety. It’s alright, even at big airports, to request as much runway as you think you safely need.

Does this mean I NEVER accept an intersection departure instruction? No, it doesn’t. But it does become a risk assessment in my own mind. On a recent trip into Chicago’s O’Hare airport, I was given a departure runway of 28R and an intersection of N5 for my departure. The runway is 13,000 feet long, and that particular intersection was only about 3,200 feet down the runway, leaving nearly 10,000 feet remaining for the takeoff. It was a risk I was willing to accept. But would I have accepted the same loss of available distance on a 7,000-foot long runway? Doubtful.

Personal discretion becomes a valid point. But a conservative approach is most certainly safer.

When is a downfield departure warranted? Well, the best advice I can give here is an intersection or downfield departure is recommended when a departure from the full length actually results in a greater risk. A couple of things come to mind that might cause this. One might be to execute a departure procedure to avoid wake turbulence concerns. Another might be if part of a runway is unsuitable for use due to contaminants such as FOD, snow, ice or other concerns. The last one that initially comes to mind for me is if a part of the runway is damaged and unsuitable for use. This is most commonly the case in my experience on grass runways, but I have on one occasion seen a runway damaged on one end from the previous weekend’s drag races that were held as a part of a local festival (while the airport was closed, fortunately). Any other time, we should be minimizing our risks, and a longer runway does that.

Most things we do as pilots come with risk decisions—when we fly, what aircraft we operate, what weather conditions we tolerate. How much runway we need is part of that risk assessment. Where you choose to depart from on a runway is something you have direct control over. Maximizing the resources available to you and minimizing the risk that comes with intersection departures may require a little more taxi time but can help give you more options in an emergency to introduce fewer potential traffic conflict risks.

It’s up to you in the end, but my vote is for the little bit of extra taxi time and a full-length runway when it’s an option. Next time ATC offers an intersection departure, will you take it or request a taxi for full-length?