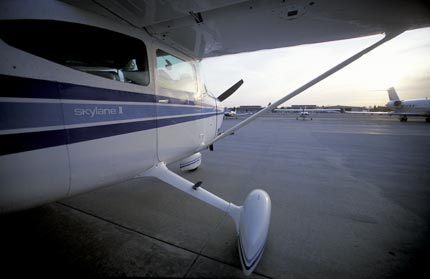 When we were student pilots, we were told to check the tires for condition and inflation before each takeoff. But as we progressed in our flying careers, some of us have taken tires for granted. Sure, we’re careful to check the “important” stuff—engine oil, fuel, headset batteries and radios—but we keep tires on a second-class status, merely glancing at them to make sure that they’re all accounted for and aren’t flat.

Continuing this bad habit, however, does have serious consequences. So perhaps it’s time to go back to the basics and take a look at tires in a whole different light because, in the whole scheme of things, they’re just as important as the rest of the components of an airplane.

The Trouble With Tires
For most of their lives, airplane tires don’t do much except keep the metal parts of the airplane off the ground. For brief periods, though, they work hard—especially during taxi, takeoff and landing. As airplanes get heavier, the margin in the tire loading goes down; as airplanes go faster, the margins become even thinner. With a high-performance airplane, the tires aren’t underutilized; in fact, they’re at their optimal design point—neither too large nor too heavy—for their intended task. That means that the tires need to be kept in excellent condition, and one way to assure that is to check the inflation, which, according to industry experts, is the single, most important parameter of a tire’s life, load, maintenance and safety.

One thing to keep in mind is that tires leak. Industry standards permit as much as a 5% pressure drop per day. So that means that even if you had an annual a week ago, your tire pressure doesn’t count for anything today. Even “perfect” tires can lose 1% to 2% of their pressure a day; and if the temperature changes dramatically, the air in the tires expands and contracts all by itself. And hours after you’ve checked your tires, a drop in air temperature can reduce the tire pressure to a dangerously low level.

It’s possible to overinflate, too. Not only do you run the risk of having the tire and/or wheel explode with tremendous force, but you also can get some undesirable handling.

Cody McCormick, an insurance underwriter who was the ground control approach chief at Troy, Ala., remembers, “I saw a guy with a new Maule with tundra tires on it down in KTOI. After about 10 touch-and-goes [with the tires properly inflated], he decided that he didn’t like the look of the soft tires, so he put about 24 pounds in them. He did 10 touch-and-goes on his next landing—I’ve never seen an airplane bounce so high so much, so far.”

But what about using nitrogen? Rob Robson, Goodyear’s aviation tires product support manager for North America, says, “If you can get dry nitrogen, that’s a good thing because it reduces corrosion on wheels. Oxygen also can affect the rubber. And nitrogen has the additional benefit of being non-combustible.”

The Pressure Principle
And as far as obtaining the right pressure goes, Robson advises, “Go with the recommended pressure, cold.” He also claims to never run your tires underinflated because, compared to overinflation, underinflation is the worse of the two evils.

Here’s what happens. An underinflated tire can’t maintain its shape and becomes flat while in contact with the ground. This excess deflection causes a traction wave that becomes more severe with speed, putting not only unnecessary stress on the tire, but also creating a dangerous situation on the runway. So, check your tires to make sure that they’re not lying too flat on the ground. When in doubt, it doesn’t hurt to err on the safe side and add air or nitrogen to your tires.

Robson advises to watch out for overinflation, however. And even though tires are sometimes better able to cope with overinflation when it comes to service pressure than the rims do, this fact shouldn’t allow you to run overinflated.

According to Robson, “There are some drawbacks to running overinflated. Although tires have to withstand four times the rated pressure—that’s straight from the FAA—I still wouldn’t run them overinflated on purpose. I know of at least one time when the wheel bolts failed [with severe overinflation]. The tire didn’t fail. It was the wheel that failed. And it cut the poor guy in half.”

Although the force of a tire’s explosion depends on its size, with smaller tires generating less force when overinflated compared to large aircraft tires, experts advise that this shouldn’t give you reason to overlook the problem. For example, a 50-pound-rated tire, which carries a 35-pound standard inflation recommendation, inflated to 80 psi, probably won’t cause any major problems, but it will quickly wear out the tire and unduly stress other components. The overinflation problem, some predict, often comes from using a high-pressure air or nitrogen source without a regulator or without monitoring your actions.

Experts also suggest to pay attention to the color spots and dots on your tires. They can help guide you in determining your tires’ light and heavy areas. The red dot signifies that it’s at the light spot, so line up the red dot with your valve stem. On a more-sophisticated tube, you may see a yellow stripe. That’s the tube’s heavy spot. So align that yellow stripe with your tire’s red dot, and you’ll be as close as you can get without balancing the assembly. The white dots represent the vents on a tube-type tire, and the green dots are the vents on a tubeless tire.

More Than Just Tires
Perhaps even more surprising is that properly inflated tires not only keep you safe, but also make you look good. According to Robson, “Anything that helps your tires will help your ground handling.”

Properly inflated tires, in good condition, put less stress on the rest of the airframe, and maintaining all tires at the right pressure will minimize asymmetric brake and steering action, giving you a better feel for the airplane and better ground-handling skills—all while extending the service life of your gear and airframe, and increasing tire life.

Take Responsibility
Although it’s ultimately up to you when it comes to checking your tires, don’t blame yourself for pressure loss. There are several reasons for this problem to occur. The casing itself, for example, is slightly porous, and there’s an intentional vent in the tire body itself. There also may be a safety plug in the wheel that leaks a bit, and the O-ring in the wheel may leak some. The bead may leak, too. Even the weather makes a difference. A five-degree F drop in temperature, for example, can account for a 1% loss of air pressure.

Just remember that tires lose pressure. That’s their nature. But it’s your obligation to keep them full. So don’t take your tires for granted, and check the pressure before every flight.

Tire & Tube Tips
The inner tubes for a wheelchair or wheelbarrow may fit properly, but they’re not adequate substitutes for real airplane parts. Some cheap butyl tubes can shatter at minus-four degrees F. And non-aviation tube construction isn’t robust—you don’t want to leave your valve stem behind. For a few more dollars, get real tubes for safety’s sake. And make sure it says “aircraft use.”

Reusing tubes isn’t recommended by manufacturers. A tube, inflated inside its tire, will stretch as much as 30%. Putting it back inside a new tire risks a pinch or a fold, which is a recipe for a flat tire and a nightmare to balance.

When you’re mounting a new tire or installing a new tube, it doesn’t hurt to use talcum powder on the outside of the tube. This allows the tire and tube to move relative to each other, minimizing the chance for pinching and folding. Experts also recommend an especially formulated tire-mounting lube or no lubrication at all. Some say a diluted soap solution helps, although they warn that water may contribute to corrosion. Never use a petroleum product since oil eats rubber.

Check that no harmful chemicals are used on your tires. Brake fluid will take the paint off just about anything it touches, especially tires. Silicone is just as harmful—although it won’t hurt the rubber, it can allow the tire to slip on the rim, permitting air to escape and making your brakes useless, all while throwing the assembly out of balance and shearing the stem off your tube.

You may use a tube inside a tubeless tire. You might feel the extra weight, but the assembly may be useful when you’re stuck with having only a tubeless tire available, and your airplane has tube-type rims.

If you detect leakage on any part of your tire, apply dishwashing soap solution to the suspected area. If it produces bubbles, then you have a leak.