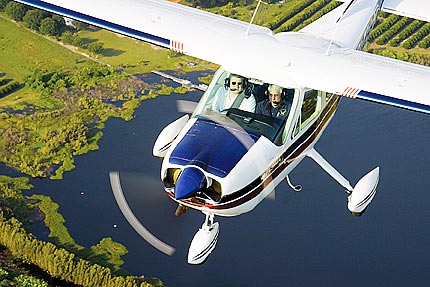 How often has your significant other told you, no, ordered you to get out of the house and go flying? After seeing her husband mow the lawn in different directions for the third time in a week, D Frechette figured that flying was just what her husband, Roger, needed. A retired Massachusetts state trooper, Roger was not, shall we say, challenged with landscaping.

Roger’s flying story, drifting in and out of the sky, has a familiar ring to it. Like so many others, he began flying with enthusiasm and then drifted away from it with the demands of family and work weighing heavily on his time. Unlike most, Roger’s reason to start flying was because of a dare.

Driving by a grass airstrip with some friends, one of them dared the others to go flying: “Well, I couldn’t let that go. I went for an airplane ride and I liked it so much that I began working on a private license. My mom used to bring home airplanes for me to put together and I always drew airplanes as a kid. I just needed to get started.”

After a few stops and starts Roger went on to finish his commercial license and briefly thought of making a try for the airlines. “After a bit, I realized that I was too old to pursue an airline career and raising a family was just too important,” says Roger. “At the time, I was working as a draughtsman for Raytheon and raising a family. I ended up getting a job as a policeman and eventually finished as a state trooper. Along the way, I just ran out of time and money to keep flying.”

A lot of pilots find themselves in a similar predicament. For Roger, the flying hiatus stretched for nearly 25 years. After a career and the demands of raising a family were behind him, Roger and D, decided to retire in Orlando, Fla. The move was easy for D. She found herself in demand as a third-grade schoolteacher: “The weather was better and I was just as busy as before.”

Roger, on the other hand, didn’t find retirement to be as much fun. He was restless: “I began teaching traffic safety classes for the Sheriff’s Department. I enjoyed instructing and expanded into Crime Watch as a part-time deputy.”

Even with Roger’s new activities, D began noticing new horizontal lines in the yard, followed within a few days by vertical and then diagonal lines. Sensing a growing frustration with the slower-paced, sunny Florida life, she decided Roger needed a push.

Explains D, “I just told him that he needed to get back into flying, that he really needed to do something constructive with his time. After all, there are only so many ways you can mow the grass.”

Roger got back into flying in a big way. “I brushed the rust off and then picked up an instrument ticket, followed by flight instructor and instrument instructor certificates. I found instructing exciting and have been doing it ever since.”

Roger began flying the Sheriff’s Department’s Cessna 206 and soon started thinking about an airplane of his own. D agreed, and before she realized it, Roger had found a very nice Cardinal and brought it home to Kissimmee Airport.

D was excited. “I enjoy flying in the Cardinal, going off to interesting places and spending more time with Roger when he is doing something he enjoys. From my point of view, flying the airplane is a nice family thing.”

Roger was taken by the Cardinal’s big doors and easy entry. Its ability to carry four people easily and cruise around 130 knots was also a big draw. In less than two hours, they could be anywhere they wanted to go and the airplane easily held everything they could pack into it. Roger was not put off by the laminar flow wing, found on pre-1970 airplanes, nor by the need to manage passengers, baggage and fuel when operating near gross weight.

“I think it’s a near-perfect airplane,” says Roger of his Cardinal. “Not as big or fast as a 206, but it’s a whole lot faster than a Skyhawk. It looks sleeker with the speed-sloped windshield and I really like the cantilever wing. The improvement in visibility is incredible. You’d just be surprised.”

Certified in 1967, the Cardinal was meant as an unofficial replacement for the venerable C-172 Skyhawk. Two thousand seven hundred fifty-two examples were built during its 10-year production run. Beginning with a fixed landing gear, it ended with more horsepower, a retractable gear and a constant-speed propeller. The cabin is six inches wider than a Skyhawk and is larger than a Piper Cherokee. A huge baggage compartment, cabin doors that swing out to 90 degrees and excellent visibility round out a very nice airplane that categorically fits between a basic Skyhawk and the top-of-the-line Skylane.

The laminar flow wing allowed higher cruise speeds, but resulted in higher stall speeds. The safety record, however, shows a slightly better-than-average fatal accident rate than most of its competition. Wet wings, Fowler flaps and an all-moving stabilator are some of the other innovations included on the Cardinal. Unlike most of its competition, the Cardinal has a large and forgiving CG envelope.

Roger bought the 3498T in relatively good condition, with only a few hours on it, but he found many little things needed attention. Looking for help to bring the Cardinal back to life, he turned to a type club. Says Roger, “The Cardinal Owner’s Association was a big help and a fantastic resource. For any problem, they have the answer.”

With the help of his mechanic, Frank Albritton, he repaired some corrosion, replaced a few pieces of sheet metal, fixed the wheel pants and repainted to match the still pristine finish.

During the rejuvenation process, Roger found himself unable to resist a few modifications. The biggest thing he did was to install a Powerflow exhaust system. “I didn’t believe it,” Roger says. “It really added about five knots to the cruise speed and an increase of 200 feet per minute to the climb rate. I used to burn 8.5 gallons per hour and now, at the same speeds, I burn 7.6. It really makes a difference.”

The revamped Cardinal has also made an impression on D: “My favorite trip is to fly to Cedar Key for lunch. If you call the lady cab driver on the Unicom frequency, she’ll be waiting to take you for the short ride into town. The airplane flies so nicely, and we have so much fun with it, that I took the AOPA’s Pinch-Hitter course and have been taking lessons so I can land the airplane if there is ever a problem. I’m not sure if I have the bug to finish yet or not, but I do like to use the airplane to teach a class for my third-graders. Knowledge is power.”

Standing in the Florida sun, Roger sums up the impact the airplane has had on their lives: “For us, the Cardinal allows us to experience the freedom above the clouds. We call the airplane ‘Miss Liberty,’ and that’s how we refer to it. We know it’s just an airplane, but to us it’s something special. I’m just lucky, at this time in my life, to be flying. I never thought I’d own an airplane. I probably wasn’t ready for it before, but now I don’t know how I’d live without it.”

D agrees, “You’re never too old to start something new.”