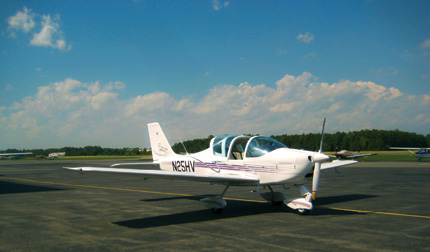 Webster should put a picture of a human under its definition of “adaptability.” We evolved apes are genetically wired to fudge, quibble, compromise, connive and cajole en route to achieving our impossible goals. Take personal flight. We’ve skied down the general aviation plummeting chart line so long, we’ll have an identity crisis when sales numbers head back up!

So when David Kruger said to me, point blank, “There’s no turning GA around without solving this cost-of-flying problem,” I had a sobering moment. See, I had adapted. I was expecting to carve tight turns down that slippery GA slope forever. I was hooked on self-reliant flight small-ball by pilfering piggy banks and pondering bizarre financing schemes.

But, says Kruger, the bottom of the slope is nearer than we realize: “If we don’t figure out a way to make this work, the view 15 to 18 years ahead looks pretty grim.”

Kruger is a web consultant and market analyst who studied the data and found that the inflation-adjusted cost of buying a plane has quadrupled in the last 30 years. He estimates the percentage of the population that can purchase a personal aircraft outright has shrunk to 1⁄20th of its 1978 peak.

Over the years, we’ve lost much of our wonderful aviation culture. Once, school-age kids earned flight time at local airstrips across America. Dads flew the family around the patch, and children went on to earn their wings. Workaday folks took weekend flying lessons at clubs and schools, then rented or bought aircraft.

But in this era of $400,000-plus aircraft and $100,000-plus LSA, David Kruger and other bright folks believe in a better way: “The problem only seems to be the cost of owning an airplane. The solution is realizing that isn’t the problem at all. It’s hourly cost, not purchase price, we should be looking at.”

But Kruger’s research told him we can afford to own and fly. We’re just looking at it all cockeyed. In a “white paper,” he wrote: “The primary usage constraint on all types of recreation vehicles is available recreation time—not cost [my emphasis]. The vast majority of power-sports buyers are still in the workforce. Recreational usage is constrained to evenings, weekends, holidays and vacations….average annual hours of power-sports vehicles and personal use aircraft is equivalent—on average…about 50 to 100 hours per year.”

He reasoned that if folks could wrap their heads around hourly cost—not purchase price—as the true grail indicator of personal flight’s eminent affordability, then GA sales, and the flying community infrastructure, would resurge: “The U.S. power-sports market ($44 billion yearly) is…60 times the size of the U.S. piston-engine aircraft market. To make volume sales of aircraft to the power-sports market, the average purchase price must be reduced to a range of $5,000 to $50,000.”

Here’s a key point: “Aircraft mean ownership and operating costs, i.e., fuel, oil, maintenance, storage, finance and insurance…are remarkably similar to [those of] power sports…[which are also] $50 to $150 per hour.”

Consider this: Putting 50 to 100 hours per year on your boat/plane/Jet Ski means that vehicle remains unused for 8,650 hours! All that expense and hassle just to say, “It’s mine!” and your poor boat/bike/airplane sits alone in the dark most of the time? Gotta be a better way. And here’s Kruger’s: shared ownership.

He’s urging us to do what we do best: adapt—to get over our national addiction to personal ownership, exotic financing schemes and mostly unused vehicles.

Hasn’t the economic collapse this past year put the kibosh on the “have it your way” mentality? When did our once-great American sense of communal experience become so “last week”?

Taking action, Kruger created a kind of dating service for people willing to share an aircraft and have all the loose ends tied up for them. The result was The Aircraft Partnership Association (www.theapa.com), a web-based matchmaker service that’s sort of like eHarmony—for pilots.

“It’s a simple two-step approach,” says Kruger. “We help you find partners, then provide you the means to administer shared ownership. We designed in 29 dimensions of compatibility. We ask, ‘What would you like to own, what’s your budget, how many partners and what kind of maintenance setup do you want?’”

Members who join the (free) service can create private, limited, cooperative, fractional and equity flying clubs, and other partnership styles.

“APA is as applicable for a first-time LSA buyer as for a longtime owner who wants to trade up to a Cessna Mustang jet,” explains Kruger. He puts it simply: “We all need other people.”

Homo aviens adaptavus, rise! Why not meet the challenge of mounting flight costs by gathering new flying friends and creating new communities? “Cultures change from the inside out,” asserts Kruger. “The more quickly the current GA community refines the means and methods of shared ownership, the sooner we can use the lessons learned to make sales to the untapped power-sports market.”

Capitalism, and the Internet, have taught us this: The more people get involved with something, the cheaper each unit of involvement gets. Sell more airplanes, share costs with partners and spend less all around.

And you don’t need to be Stephen Hawking to realize that when viable partnerships come to aircraft dealers with all the details worked out, then qualifying for loans will be no more challenging than it is for single buyers. Pooled resources equals legitimate buying power.

Kruger calls it network effect. “Metcalfe’s Law says, ‘The power of a network increases in proportion to the square of the number of nodes on the network.’” Nodes means pilots: The more pilots participating, the more sales potential increases—exponentially.

Also, according to Say’s Law, “Supply creates its own demand.”

Here’s Kruger’s “ah-ha!” moment in a nutshell: The supply commodity that’s been lacking for GA is therefore not low-cost aircraft, but rather the knowledge that shared aircraft ownership makes flying as affordable as other traditional power sports. “Once we educate the market, sales of aircraft will follow,” he notes.

Bill Boczany, an APA member, shared his ownership experience: “In January, I put up flyers at local airports for partners to buy an LSA. Not one bite! Then I saw APA’s ad, signed up online and soon heard from Jim Graham and Rob Dean, other members looking for an airplane. We put together a budget and operating rules for the partnership, and got a great deal on a Tecnam Sierra. The critical thing for success is partner, partner, partner. APA made it like finding a great date. Everything was worked out, from hangar logs to the right insurance.”

Folks, it’s time to dream again of owning an airplane. The culture of personal flight need not die out. Let’s get mom, pop and the kids back flying. Let’s join hands and make new flying communities across the land.