Five years ago, the first special light-sport aircraft (S-LSA) received its airworthiness certificate, opening up a new chapter in the regulation of simple personal flight. More than 1,000 of these factory-built aircraft and more than 8,000 former ultralights (experimental light-sport aircraft, E-LSA) are now flying under the sport pilot and LSA category. At the beginning, some people expressed concern that manufacturers who made a simple declaration of compliance with safety standards wouldn’t be held accountable should any problems arise. Last year, both the FAA and NTSB began studies assessing the LSA industry to see how it’s functioning after a half decade of operational experience. The results of these studies will expose any system weaknesses and will likely lead to recommendations for some changes. At stake is the delicate balance between the low cost and complexity that brings growth and innovation and the burdensome regulation that can stifle industry and turn people away from flying.

The self-declarative system isn’t new. It has been embedded in FAR Part 103 for ultralights since its inception in 1981. Twenty-three years later, the LSA rule shares a similar philosophy. Consistency between the rules can be found in the preambles where the FAA states its expectation that the industry take responsibility for developing and implementing aircraft safety standards, quality-assurance systems, maintenance requirements and a continued airworthiness process. By this, the FAA allows less expensive products to be produced for the market in a quicker time frame. (Having to go through the type-certification process is laborious and costly.) Similarly, the aircraft pilot and owner are given operating provisions that reflect the limited arena in which many casual weekend fliers partake for sport and recreation.

One of the major differences between the ultralight and light-sport rules is the required use of industry consensus standards. In the early ’80s, Larry Burke and others involved with the Powered Ultralight Manufacturers Association (PUMA) and, later, the Light Aircraft Manufacturers Association (LAMA) developed voluntary safety standards for ultralights. For some reason, however, the industry didn’t buy into the system and it languished with only a few manufacturers participating. 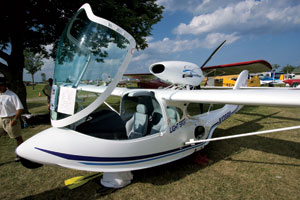 Now, with robust standards and the use of new technologies, we’re seeing a plethora of high-quality, efficient, fun-to-fly aircraft flooding the personal aviation and flight-training marketplace. These newly manufactured aircraft outperform their traditional counterparts and, in some cases, offer better value. Because the standards are nongovernmental, they’re international in scope and are being referenced by a growing number of countries. Two thirds of all LSA today are manufactured outside the United States.

During a recent visit to the European Aviation Safety Agency (EASA), it was intriguing to note that EASA is following a path the United States took in the early ’90s with recreational pilot and primary category aircraft certification. One of EASA’s current goals is to regulate aircraft with a gross weight between 450 kg and 2,000 kg (this covers “fat” microlights through something like a six-seat Cessna 206 on floats) by simplifying the existing type-certification process. The organization proceeded even with the understanding that after 15 years, only a handful of recreational pilot and primary category aircraft certificates were ever issued in the United States.

While many who have jumped into LSA ownership have come from a general aviation background, there has also been a trickle toward LSA from the noncertificated realm. I recently chatted with Wallaby Ranch Flight Park proprietor Malcolm Jones as hang gliders launched toward puffball clouds above his central Florida property, and we shared notes on the allure of personal flying. Wallaby is an oasis of tree swings, bungalows and a swimming pool surrounded by takeoff areas in all directions. It’s a peaceful Eden for frolicking and has no fences, gates or signs—nothing to deter the casual observer, unlike what you’ll find at many GA airports. Activity at the ranch is relatively stable: New blood comes in as others leave.

Jones and I talked about my new job in the FAA Light Sport Program Office and how the light-sport rule had affected his operation. He was surprised at the small negative impact the rule had on people who were now required to get a sport pilot certificate. Most of the hassle, he commented, was just paperwork. Furthermore, conversion of the ranch’s existing ultralight tugs (used to tow the hang gliders) was no problem. I also met with a group of ranch regulars, and it was clear that, for them, LSA was the future. In one hangar, I even spotted four gleaming new Sea Max LSA amphibians, ready for new owners to fly them away.

Advertisement
Whereas recreational pilot and primary category rules could be viewed as using a “top-down” philosophy (the existing system of heavy governmental oversight is maintained, yet the requirements to meet them simplified), it could be said that ultralight and light-sport rules use a “bottom-up” philosophy (based on long-established operating practice, a new system was created that gives the industry more responsibility and allows authorities to focus on broader, essential regulations).

In the early days, there had been a (maybe false) expectation that the industry, user groups and FAA would form an alliance or partnering scheme to oversee manufacturing and operations. The light-sport rule appears to have taken the idea to a new level. Industry and affected interest groups are creating globally recognized standards. The FAA is participating in the process as an equal. Organizations like LAMA are offering compliance auditing services.

Personal aviation is now at a crossroads, and the question remains: Will the FAA and NTSB find that, while not perfect, the declarative system based on industry safety standards is a good model to keep? If they do, this could impact what EASA does and possibly create the opportunity for a worldwide aviation safety standard! This would greatly benefit manufacturers who could provide the public with more choices at a reduced ownership cost. It would also give industry and operators more responsibility with less government regulation. Given the decline in personal aviation activity worldwide over the past several decades, this may just be the kind of thinking needed to revitalize aviation for years to come.

Tom Gunnarson is a 28-year veteran of the recreational aviation industry. He’s the former president of LAMA and is currently the secretary of the ASTM F37 Committee on LSA and an industry analyst in the FAA Light Sport Program Office in Kansas City, Mo.