“Experience is a hard teacher because she first gives the test, the lesson afterwards.” Vern Law (major league baseball pitcher)

Flying can be particularly unforgiving during the testing of the inexperienced, when we learn what not to do, if there is to be a next time, that is.

Having flown on a private license ever since earning the privilege back in 1981, I do have some experience with windy conditions. In fact, I experienced my first crosswind landing while on my flight test. I had no idea how to deal with it, and to this day, I can’t tell you if I landed the C152 or the examiner did. Once out of flight school, I transitioned to tailwheels and have rarely flown a nose wheel since. Learning has been a way of life for me, with much of my flying done on sensitive little homebuilts and cranky antiques. Each has required procedures I had to learn and remember. Having said that, there is no end to the learning required…and available, to look at it another way.

I learned several new lessons on a recent trip to and from Oshkosh, Wisconsin, across Canada’s prairies and through the mountains to Vancouver. Winds were an issue for this taildragger pilot right from the beginning. Lulled into complacency by tailwinds and their associated high groundspeeds while eastbound, I still knew in the logical part of my brain that there would be a bill to pay when westbound. And, indeed, there was. Ground speeds that had reached 154 eastbound were reduced to the mid 80s westbound, which also added fuel stops.

It wasn’t all a free ride to the east, either. It seemed that the winds were always across rather than down any available runway. A couple of these runways are regularly used by large airliners, and those big birds don’t seem to care as much. However, it was a little different for a 72-year-old Stinson 108 and its 75-year-old tail-dragging pilot. I chose to overnight in Regina both ways because of the winds. Once I was safely on the ground, the lead hand at the FBO graciously decided that the Stinson would be safer overnight in the hangar, parked cozily between a Citation and a Gulfstream, than it would being tied down outside.

Which brings me back to the issue at hand, which was those winds and my next stop, which I planned to be Pincher Creek, located in the Alberta foothills on the eastern slope of the Rocky Mountains. The mountains just to the west of the airport top 9,000 feet and southerly outflow winds into the valley create some interesting mechanical turbulence, especially for the uninitiated. For example, I now know that the Crowsnest Pass just to the west has recorded winds upward to 80 knots, and planes have been forced down by turbulence between Pincher Creek and Blairmore. Those who know the area say, “A nice day in Blairmore is like winning a lottery.” Others, like yours truly, who didn’t know any better at the time, go with fairly predictable results.

Back to Pincher Creek. The runway in use was uphill, which was a good thing, but it was also about 20 to 25 degrees out of the prevailing high and gusty winds, which was not so good. Question: Why do runways always seem to be out of the wind? Well, I made it in safely, at least.

But taxiing was even more interesting than the landing, if such a thing is possible—and, unfortunately, it was, and, unfortunately, I needed to get gas. It was difficult to turn out of the wind and required careful use of all the flight controls, power and brakes to avoid getting rolled up into a ball. During the right turn to crosswind, I used hard left aileron followed by down elevator, combined with full right rudder and locking the right brake during the full power turn to downwind.

Once finally at the ancient self-serve fuel pump on the ramp, its operation required that one read the provided crib sheet carefully and make out a paper credit card form. I hadn’t seen one of those in over 20 years. My guess was that they don’t get much call for fuel there, and now I think I might know why.

Once I had fueled up the rocking Stinson, the departure was even more of an epic than the arrival. Local advice indicated that the winds would abate in about 25 miles, when past the site of the Frank Slide. Not on this day.

I made the takeoff as diagonal to the runway as possible to minimize the crosswind a bit. That seemed to work, but gaining any altitude was difficult due to the extreme turbulence, and right in front of me lay a wind farm with its attendant giant windmills, looming so large that at one point, I gave serious consideration to how one might go between rather than over them. Fortunately, that wasn’t necessary.

For the next 30 minutes or so that it took to finally get out of the area, I was continually hammered by severe turbulence. The Stinson’s attitude and altitude constantly changed, varying from level through 90 degrees of bank and 45 degrees of pitch and sometimes concurrently. On more than one occasion, I had the nose up with full climb power and flaps while still going down at over 500 fpm. While all of this was going on, the G meter registered plus 2 and minus 1. Once finally into smoother air, I recall being thankful, among other things, that my baggage was still secured under a cargo net I had installed just for the trip.

In retrospect, what do I think that I should have done differently? Well, perhaps I could have planned my fuel stop for somewhere else, like Cranbrook, B.C. Or, once having fueled in Pincher, taken off and headed back to the east away from the mountains in order to climb above the local turbulence before turning back to the west. Another time, I might also question the local knowledge in a bit more depth than I did this time.

That day I had flown over nine hours during a day that had begun at 4 a.m., eaten little, drank less and somehow still managed to arrive safely home and put a useable airplane back in the hangar, and with a little more of that aforementioned learning accomplished. 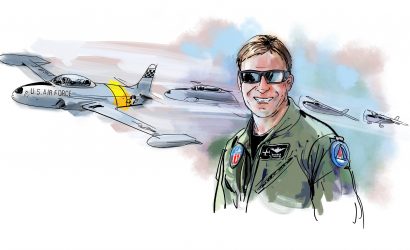