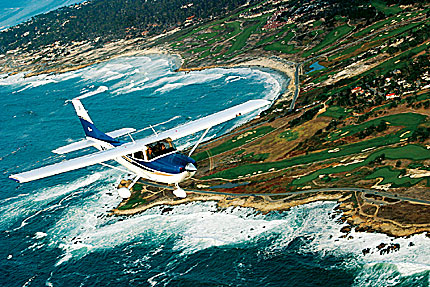 In October of last year, Cessna rolled out the 2004 Skylane for dealers to see. The newest 182 featured new paint on the outside, but something truly remarkable on the inside: an all-glass cockpit via the Garmin G1000 Integrated Avionics System. Cessna took orders for more than 300 of the new Skylanes in 24 hours, leaving them with the enviable problem of looking for ways to increase the production run to meet the demand.

Soon after the rollout, Cessna began a rigorous road show with the Cessna Skylane, touring the country to meet a variety of media requests and dealer inquiries. Lori Lucion, marketing and communications manager for Cessna single-engine aircraft, and Kirby Ortega, Cessna’s flight-training supervisor, were among the first to put the new airplane through the paces.

“It was, basically, on-the-job training,” Ortega laughs, after flying the first leg of their trip from Wichita, Kan., to California. “I was amazed, though, I really was. For example, when we crossed the Rockies, I could look way out there with the G1000 and see if we were lined up to go through the pass, and the terrain information told me if I was high enough. I got to just sit back and enjoy the ride!”

The G1000 is 100% Garmin, with all the components designed, built and integrated by the Olathe, Kan., company. Two 10.4-inch high-resolution cockpit displays do the navigating, communicating and surveillance functions.

“It was easy and fun to fly. If I was a little bit off in altitude and heading, it was easy to correct. I demand that I complete my training in a G1000 airplane,” Lucion, a student pilot, grins.

And wherever the duo landed, the Skylane drew a crowd. Arriving in Monterey, Calif., was no exception. Among the lookie-loos was the Air Force’s premier air-demonstration squad, the Thunderbirds, who were in town for an air show in nearby Salinas. As the team looked the new Garmin panel over, someone in the crowd teased them about having to fly some of the oldest F-16s in service, most of which aren’t half as well-equipped as the Cessna in front of them.

The G1000 is an eyeful because it integrates all flight, navigation, communication, terrain, traffic, weather and engine sensor data onto two screens, a primary flight display (PFD) and a multifunction display (MFD). It has dual avionics systems with dual com radios, dual VOR/LOC/ILS receivers and dual GPS receivers based on the now ubiquitous Garmin GNS 430/530 technologies. While the demonstrator that Ortega and Lucion flew was still waiting on several components for final certification at the time of this writing, the all-glass Skylane will feature a Honeywell KAP-140 Dual Axis autopilot with altitude preselect and GPS Roll Steering functionality. A WX-500 Stormscope can be displayed on either the PFD or MFD, and a high-bandwidth data weather-link system from XM Satellite Radio will display NEXRADs, METARs, TAFs, lightning and 14 other weather services, making the Skylane an astonishingly well-equipped single-engine instrument platform. “3-D” terrain views and Jeppesen View/FlightDeck electronic charts are scheduled to be added in the near future.

Basic flight information, like attitude, airspeed and altitude, are displayed directly in front of the pilot on the PFD. The big screen is bordered by additional navigation and communication data, and an inset or copy of the neighboring screen can be brought up on the PFD at the touch of a button. As you would expect, the MFD handles functions like moving map, weather and combinations of EFIS engine monitoring. Its programs also allow a variety of other displays, including aircraft checklists, runway depictions, traffic and terrain information. 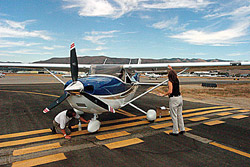 The heart of the G1000 is a solid-state Altitude Heading and Reference System (AHRS). It combines highly accurate GPS positioning, air data and 3-D magnetic-field information (from an onboard magnetometer mounted in the left wing!) to supply the images that the pilot sees on the LCD displays. Interestingly, the Garmin G1000 system is the only one in the market that can align itself while moving. Should there be a power interruption or other hiccup in flight, this AHRS can pick up the pieces and quickly carry on. Other systems require the pilot to land and park the airplane for three to four minutes, while the AHRS initiates and completes the realignment process.

In case of an electrical failure, the Skylane does have a backup battery capable of powering essential instruments for more than half an hour. This battery is constantly being charged when the engine is running and automatically switches online in the event of a problem. A standard vacuum-powered airspeed indicator, attitude gyro, altimeter and magnetic compass are available at the bottom of the panel, as well.

“The situation awareness is the thing that knocks me out,” Ortega quickly admits. “Even when you’re on instruments, it’s more like ‘virtual VFR.’ You don’t have to do much cross-checking. It’s just all right there in front of you on the screen.” 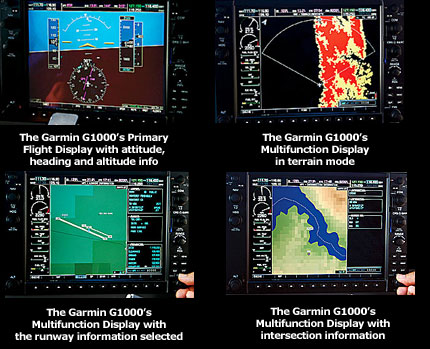 Lucion adds, “Compare this to an old-fashioned attitude indicator and you’ll say, ‘Holy smokes, I can’t fly this thing anymore!’”

But the fire-hose-full of information coming from the Garmin G1000 panel didn’t keep Ortega and Lucion from doing some flying the old-fashioned way—by the seat of their pants. After leaving Kansas, their course brought them to the Pacific Ocean at San Simeon, Calif., where William Randolph Hearst built his castle. From there, they simply followed the coastline around Morrow Bay and then north to the cliffs of Big Sur and Carmel in California.

“It was cool flying along Highway 1. I looked down and imagined the first cars driving that road before it was even on the map. Now, here I am, going along the same route at 150 mph, navigating by satellite!” says Lucion.

Below them, the sights ticked by as they continued north: the orchards, beaches, Cannery Row and, finally, the Golden Gate Bridge.

After a schedule of showings, they’ll finish the jobs on the West Coast and turn back east toward Kansas. Ortega will report performance information to Cessna and Garmin engineers, and the airplane’s forays will cause Lucion’s phone to continue ringing. Although plans call for the G1000 to eventually be installed in the C-206 Stationair and the new Mustang jet in 2006, the Skylane will be the first out of the chute this month.

And, so, the show goes on. The new 182 will continue making its personal appearances around the country. Look for a crowd on a tarmac near you. The odds are they’re looking at the new glass-panel Skylane.