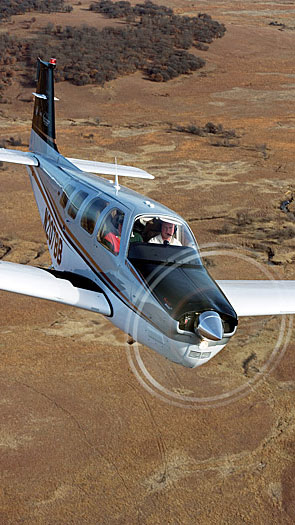 Any good design has a timelessness that transcends fashion. Whether you consider a toaster or a car or an airplane, a successful design starts with a good robust understanding of the balance between performance, looks and customer requirements.

All successful designs have one thing in common: they must adapt well to evolutionary improvement. The 1950 Cadillac and 1969 Mustang are works of art to some and cherished classics to others. But by today’s standards, they aren’t very comfortable or fun to drive; nor are they still in production. Does a new paint job and state-of-the-art avionics make a 60-year-old design contemporary?

The Bonanza transcends fashion trends and adapts to change like no other aircraft. This bold statement is supported by the fact that the Bonanza has had the longest production run of any airplane ever built. Sixty years is a long time by any measure; the only vehicle with a comparable record is the Volkswagen Beetle.

Conceived by Dr. Ferdinand Porsche, the original “people’s car” was produced for 65 years and sold more than 21.5 million copies. Dr. Porsche is also credited with several other higher-performance vehicles that grace our streets today, but the Beetle was a simple, economical car that met the needs of millions worldwide. Most importantly, small changes to the basic design kept it in competition far longer than any similar car.

How did a simple design from Wichita, Kans., even come close to approaching the record that belongs to the most popular car ever made? The answer, of course, is at once simple and complex. After Dr. Porsche designed the Beetle, the vehicle slowly changed the way the world viewed personal automobile transportation. No one had to tell Walter Beech where the wind would blow in the aviation business; he’d been deeply involved in airplane manufacturing since the heyday of Travel Air in the 1920s.

Walter and Olive Ann Beech opened their airplane company in Wichita in 1931, in the thick of the depression. Their Model 17R, and subsequent versions, remained in production until after WWII. The Staggerwing, as it became known, was the pinnacle of business aviation, the Lear jet of its day. Beech also built the Model 18, which became a standard for twin-engine pilot training in WWII and executive and cargo operations thereafter.

Beech foresaw the need to build a lighter, simpler airplane for the postwar market and sought a single-engine four-seater that could travel 180 mph in car-like comfort. The first version, the “Straight 35,” flew on December 22, 1945, and production began in 1947. Right from the start, this 2,550-pound airplane made records—Captain William Odom flew serial number four, 4,957 miles nonstop from Hawaii to Teterboro, N.Y., in 36 hours and two minutes. In 1958, a J35 Bonanza broke the nonstop record by traveling 45 hours and 43 minutes from Manila, Philippines, to Pendleton, Ore.

A new Bonanza cost less than a third of a Staggerwing Beech and soon became the standard for private business travel. Beechcraft continued developing the Model 35 Bonanza, eventually building 23 variants of the V-tail and 17 straight-tail versions of the same basic airplane. One of those straight-tail variants was the Model 45, or the T-34 Mentor, built as a pilot trainer beginning in 1950 for the Air Force and the Navy. The Navy is still using a turbine-powered T-34C as its standard, primary pilot trainer.

In 1968, Beechcraft decided to tailor the Bonanza for the air-taxi market and used the straight-tail E-33A as the basis for the new A36 Bonanza. Adding 10 inches to the fuselage and moving the wing back the same amount increased the stability of the airplane and added enough room for six passengers to sit comfortably. A two-door clamshell entry that was 45-inches wide was added for the aft passenger seats, which improved comfort and access enormously. The new A36 Bonanza with a Continental IO-520 could cruise at 204 mph and topped 3,600 pounds.

The A36 became the sole Bonanza in production, supplanting the V-tail Bonanza in 1982, and has been the standard for fast, luxurious single-engine airplanes until recently. A 300 hp Continental was added in 1984, and the gross weight upped to 3,650, where it stands today. The versatility of the A36 was proved when the fuselage was used to form the Baron 58 design. A concept airplane, called the Lightning, tested two different single-engine turboprops using a pressurized B-58P Baron fuselage.

Throughout its history, the Bonanza has used the NACA 2300 series airfoil; developed in the 1930s, the airfoil is known for relatively high lift, low drag and a low pitching moment. On the downside, the price for superior wing performance is an abrupt drop in lift at the stall angle of attack. The performance of the wing is so exemplary that it was chosen for the Piper Malibu line of fast singles. Variants of the wing design can be seen on Baron and even King Air aircraft still being made.

Bonanzas have long been noted for their clean lines and efficient airframes. Designed in the days of the slide rule and drafting table, Beech engineers achieved a skin-friction coefficient between a P-38 Lightning and a Lear 25 business jet. The airplane is fast and not easy to slow down, forcing a pilot to plan well ahead. In any configuration, the Bonanza is light on the controls, and stalls occur with plenty of warning, except in a landing configuration. All Bonanzas are stable in pitch, exhibit some degree of Dutch Roll in turbulence and have weak spiral stability. The Bonanza is not a hands-off flyer, but because of the aileron-rudder interconnect, you can easily fly with only your feet or your hands. 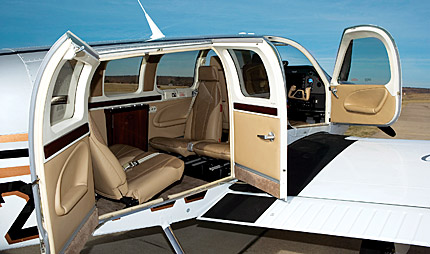 The Beech factory has continually improved the basic airplane, and aftermarket modifications are available in a staggering combination of choices and effectiveness. The original Bonanza had four-seats and the late model G36 is a six-seat airplane. The presence of seats is often misunderstood for the ability to load each seat, pile on the baggage and go on any trip with full fuel. In reality, there are few GA airplanes that can reach those goals, and the Bonanza is no exception. A pilot must pay close attention to the CG’s location and load weight to keep the airplane within limits. This can mean leaving fuel or baggage behind.

An abundance of modifications adds fuel, increases gross weight or changes the engine configuration, any of which can change the airplane’s operating characteristics to some degree. One significant engine STC is offered by Tornado Alley Turbo in Ada, Okla. Its system, a turbonormalizer, transforms a Bonanza into a platform capable of maintaining sea-level horsepower to 20,000 feet at fuel flows of 17.5 gph. With 300 hp, the turbo system converts a 36 model Bonanza to a 195- to 210-knot screamer that can keep up with the latest composite airplanes. The modification adds 80 pounds to the aircraft’s empty weight and bumps the gross weight to 4,000 pounds—a welcome addition to the capability and useful load of this sleek airplane.

Perhaps the biggest change is the addition of the Garmin G1000 avionics package, which puts every conceivable bit of info right at the pilot’s fingertips. Sunlight-readable 10-inch displays put all the PFDs within an easy-to-interpret small area, along with graphic maps, airspace, traffic and weather, all configurable to meet the pilot’s preference. The Garmin flat-panel display is more than a gadget; it’s a 21st-century requirement that can display near-real-time weather and TFR information.

The 60th anniversary edition of the Beechcraft G36 Bonanza comes standard with distinctive badges, logos and handpicked color schemes including unique “snake-skin” leather upholstery and trim. Beneath the surface, the new GFC 700 integrated autopilot is standard on every new G36, as is XM Radio for the entertainment system. Propeller deicer and passenger air-conditioning round out a very well-equipped airplane.

The Bonanza may no longer be the apple of the fashion eye, but it turns in solidly respectable performance numbers with the largest passenger cabin in the single-piston engine class. The basic airframe puts in respectable performance numbers with an airplane that’s a joy to fly. Add in the new integrated avionics package, autopilot and datalink information, and the 60th anniversary edition Bonanza is a true pilot’s airplane, still ready to fly anywhere, any place, at any time.