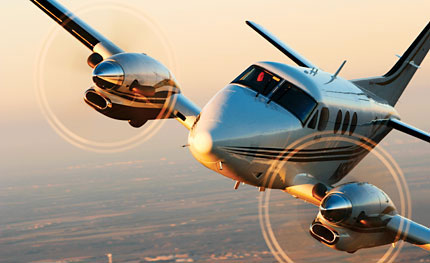 Too often, it seems the aviation press gives short shrift to one of the most important segments of business flying. Turboprops have long been the forgotten stepchild of corporate aviation. To paraphrase comedian Rodney Dangerfield, “Turboprops just can’t get no respect.”

Most recently, that may be primarily a function of their relatively low sales volume. Back in the 1970s and early 1980s, twin turboprops were the rage, with two dozen different models available from companies such as Commander, Piper, Cessna, Mitsubishi, Swearingen and Beechcraft.

Starting in the late 1970s, however, jets began to steal much of the turboprops’ thunder, and many of the manufacturers listed above gradually opted out of the turboprop market altogether. Jets flew higher and faster, they optimized the value of executive time, and there was little question they were more prestigious than any other type.

Perhaps most important of all, however, jets had sex appeal. The original Citation 500s and 501s weren’t much faster than the quickest turboprops, but the difference in image was dramatic. Turboprops have, well, props, and in some CEOs’ estimation, that’s definitely old school. (After all, how many executives want to have to tell a client, “Be at the airport at 2 p.m., and I’ll have the company turboprop pick you up”?)

That may be one reason there’s so much excitement about the new very light jet (VLJ) market, with a half-dozen manufacturers vying to offer their own four-to-six-place mini-jets. While many industry watchers question the true size of the VLJ market, jet-engine manufacturers, such as Williams International and Pratt & Whitney, are gearing up to produce thousands of engines, and companies such as Cessna, Eclipse and Adam Aircraft are working hard toward certification of the Mustang, 500 and A700, respectively.

Still, turboprops continue to do some things better than virtually anything else in the business-aircraft class. In addition to lower acquisition cost, better specific fuel consumption and cheaper direct operating costs, propjets offer cabin size, noise and vibration levels comparable to many jets, and because jets must spend more time climbing, the speed trade-off isn’t always as significant as you might imagine. Turboprops sometimes can produce good speed in the lower flight levels, whereas most corporate jets must be operated above 33,000 feet to realize their speed potential. Also, turboprops offer better short-field performance than pure jets. They’re typically able to operate from shorter, semi-prepared runways with less danger of FODing an engine. 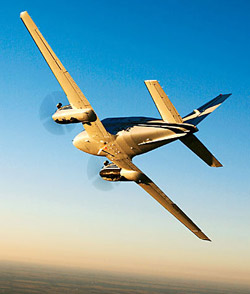 The Beechcraft line of King Airs have long been the premier twin-engine propjets on the market, and Beechcraft has produced the type continuously since 1964. In fact, in January of this year, Beechcraft pushed its 6,000th King Air out the door at Wichita, Kan. (Interestingly, the 5,000th King Air was delivered in 1996, so Raytheon Aircraft Company/Beechcraft averaged about 100 airplanes a year for the last decade.)
Advertisement

Drop back 40 years, and the first King Air to fly was the model 90, essentially a pressurized, turboprop adaptation of the piston-powered Beechcraft 65 Queen Air. Indeed, that first King Air was to spawn a whole family of turboprops, several versions of the model 90, the 99 airliner, the 100, 200, 300 and 350. King Airs have never been the fastest airplanes in their class (that honor belongs to Piper’s long since discontinued Cheyenne 400), and the Beechcraft turboprops certainly have never enjoyed the lowest prices in their field. Typical of other Beechcraft products, each of the company’s entries in the turboprop class have been priced near the top of the market.

Yet that hasn’t impacted sales. The venerable Beechcrafts have the distinction of simply having survived when all the manufacturers above have long since given up on twin-engine propjets. (Today, Piper produces only the single-engine Meridian, and Cessna still builds the successful, utility, unimotor Caravan, while Beechcraft’s turboprop line continues to include the twin-engine C90B, B200 and 350.)

The modern King Air C90B is dimensionally the same airplane it was in 1964, although the model has been dramatically improved in practically every area. The biggest change on the C90B, introduced in 1991, was the installation of four-blade, McCauley propellers. In keeping with the King Air’s normal executive mission, Beechcraft also placed special emphasis on reducing cabin noise and vibration levels. The C90B’s passenger compartment retains the same generous space as the original airplane, 54 inches across by 57 inches tall, and the smallest turbine Beechcraft is typically configured for two pilots and as many as five passengers in the rear.

Power is still provided by a pair of 550 shp Pratt &Whitney-Canada PT6A engines. The durable Pratt turbines have become famous for their reliability and currently boast a TBO of 3,600 hours. Unlike piston powerplants that often are hard-pressed to come anywhere near their recommended TBO without several topped cylinders, turboprop engines are significantly more consistent and dependable. Granted reasonable maintenance and attention to temperatures, there’s no reason why the P&W engines shouldn’t run right to their TBO limits.

Early model 90 King Airs got something of a bad rap for being slow, and it’s true that the type’s wide, tall cabin does exact a price. Aerodynamicists call the phenomenon equivalent flat plate area, essentially the drag of the entire aircraft translated to an equivalent plate, and the C90B has plenty of it.

As with most turbine aircraft, the C90B offers a variety of fuel/passenger/range configurations. Max cruise on the current C90B is listed at 246 knots at 16,000 feet, provided you’re willing to pour 88 gph through the engines. With max fuel capacity set at 384 gallns (2,573 pounds), that means you would be limited to three hours of endurance plus alternate plus reserve.

Load up the cabin with all the people and baggage you can carry, and range is reduced to less than 200 nm. Conversely, fly with full fuel and only three souls on board, and you can reach out and touch 1,200 nm.

The good news is that corporate travel rarely demands heavy passenger loads or long range. A few years ago, the National Business Aircraft Association surveyed its membership and determined that the average passenger load was only 3.2 and the average stage length for all types of aircraft was only 352 nm. Remember that includes Gulfstream GIIIs at the top of the class, so the operational average for most of the class may be even shorter.

What has endeared the King Air 90 to the last two generations of pilots is the way it flies rather than how fast it can transit from Houston to Jacksonville, Fla. The airplane has long had a deserved reputation as one of the most comfortable corporate transports in the sky. No matter what the passenger load, the King Airs are among the most sumptuous and luxurious vehicles available. Pressurization remains at 5.0 psi, adequate to provide a sea-level cabin to 11,000 feet or a 10,000-foot cabin at FL250. (Technically, service ceiling is just under 29,000 feet, but the airplane does its best work in the low to mid-20,000s.)

There’s something to be said for control harmony, and Beechcraft products have always enjoyed some of the best in-flight handling in the industry. Pilots consistently praise the King Airs for their remarkable stability and predictable control response. The type is almost universally regarded as among the most stable of instrument platforms, as easy to nail onto an ILS in choppy weather as it is to grease onto a smooth, asphalt runway.

For 2005, the King Air C90B is virtually alone in the twin-turboprop class. Pilatus and SOCATA offer single-engine jetprops, but if you’re looking to fly behind two turbines coupled to propellers, there’s currently no competition for the littlest King Air.