“I’ll just climb over the weather,” a friend of mine tells me when planning a departure in his Piper Navajo.

“But what if the weather is higher than you can climb?” I answer. It seems to be a valid question to me. He is headed into an area of rainy weather in an aircraft capable of climbing to altitudes higher than the average small general aviation aircraft but certainly not high enough that it can climb over more developed weather, especially thunderstorms.

Every type of flying has its own unique risks and challenges, but some flying has risks that are not as commonly discussed. I believe this is true for many pilots flying what I call “middle-altitude-capable” aircraft. Many turbocharged piston-powered aircraft such as Navajos, Cessna 421s, Piper Malibus and Navajos, Twin Commanders and even some smaller turbine aircraft such as King Airs and the new Cirrus Jet can climb higher than most light general aviation aircraft but can’t reach the higher altitudes that larger turbine aircraft, including all but one light jet, can reach. Most of these middle-altitude-capable planes have maximum altitude capabilities somewhere between FL240-FL280 and, realistically, most operate most effectively in the “high teens.” 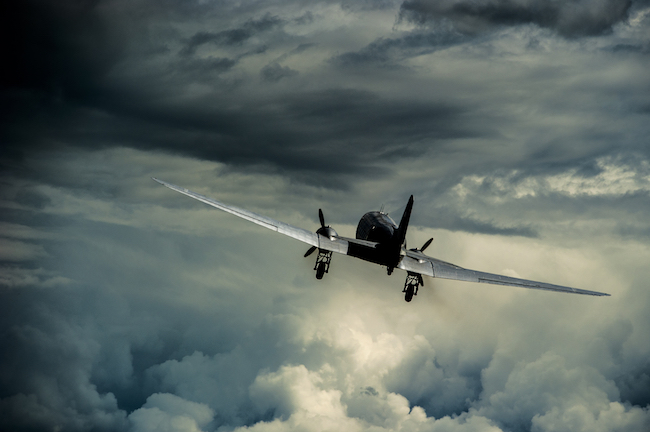 Many jet aircraft are capable of climbing over the tops of moderate and even some stronger weather systems. While the strongest of thunderstorms will out-climb virtually any aircraft, even moderate systems may reach altitudes at which middle-altitude-capable aircraft can’t effectively operate. The inability to climb to these higher altitudes leaves these middle-altitude pilots at risk to end up in some of the most dangerous portions of storms, in the tops, instead of being able to climb over them. Pilots flying the Cessna 340, a pressurized cabin-class piston twin, at FL220 may find themselves needing to fly right through some of the worst parts of a storm system.

The inability to out-climb weather and, instead, have to fly through it has resulted in catastrophe for too many middle-altitude-capable aircraft, their pilots and their passengers.

In one example I found in a quick search (NTSB Accident Number BFO95FA064), the pilot of a Piper Navajo found himself needing to climb and turn, to get “out of weather” at 17,000 feet and then at FL190. He advised ATC he was “getting icing.” The pilot was flying in an area of thunderstorm activity. One might initially assume that if icing was a factor, it was during a colder time of the year, but in this case it was June in Virginia. Ground temperatures were reported at 12 degrees Celsius (approximately 53 degrees Fahrenheit). Icing, especially in storms, isn’t just a problem during the winter. If we consider standard temperature lapse rates of 2 degrees Celsius per 1,000 feet, even on a day that is 80 degrees Fahrenheit (26 Celsius) we would find that the freezing levels would likely be around 13,000 feet MSL. Freezing temperatures and few altitude options can be a recipe for disaster for the middle-altitude pilot, who might find themselves unable to climb over these weather conditions and, even in the heat of summer, may be subject to significant icing. In the case of the Navajo in the NTSB report, an in-flight breakup of the airplane occurred. The likely cause was a combination of weather, icing, and loss of control of the aircraft as the pilot flew through weather he should have gone around.

In a second example, a Pilatus (NTSB Accident Number CHI02FA284) pilot and his passengers found themselves trying to get ahead of some thunderstorms. With local ground temperatures reported nearby as 27 degrees Celsius, we could expect (assuming the standard temperature lapse rate again) that the freezing levels might be somewhere around the 13,000-14,000 feet MSL. Several PIREPs were even present, indicating light to moderate icing being experienced between 14,000 feet and FL240.

The aircraft departed and was cleared to FL230, passing through weather that was becoming worse and into an area of known icing conditions. This altitude would not have allowed the aircraft to climb over the weather in the area, with reported tops in excess of FL450, but required the pilot to fly through the weather. This proved to be a short-lived effort, with the aircraft topping out at around 14,000 feet MSL before the radar returns showed it entering a descent with rates over 7,000 feet per minute at one point. One can easily reach the conclusion from the NTSB report that the pilot encountered weather conditions, potentially heavy icing loads, that likely caused the aircraft to stall, lose control and end up impacting the ground resulting, in three fatalities.

Both of these examples illustrate attempts by pilots with recognizably capable aircraft to fly into, or over, weather that was beyond the aircraft’s capabilities.

It is a tempting to want to when we have available aircraft that can climb higher than some weather that may keep non-turbocharged aircraft on the ground. We convince ourselves that we will climb through weather quickly to sunny cruising on top, when, in fact, we may not be able to get high enough, or the process of the climb in the weather may inhibit our performance in a manner that prohibits us from ever reaching that nice cruising weather we planned to fly in when we originally took off.

Higher isn’t always high enough. Careful consideration of tops, a willingness to go around, or a decision to stay on the ground are great ways to mitigate the risks of not being able to out-climb the weather. Sometimes, even flying lower may allow a pilot the ability to get below clouds and visually avoid storms when climbing to higher altitudes puts them in the clouds and unable to “see and avoid” embedded storms.

The ability to fly an aircraft at a higher altitude does not make everything better for a pilot. In fact, in some instances, it increases risks. Thoughtful pilots can take advantage of flying at these higher altitudes if they are aware of the pitfalls and avoid them in their operations. But decision-making skills are critical when deciding if higher is going to accomplish the goal or just put the flight at greater risk.

Jason Blair is an active single- and multi-engine instructor and FAA Designated Pilot Examiner with 4,900 hours total time and 2,850 hours instruction given. In his role as Examiner, over 900 pilot certificates have been issued. He actively works within the general aviation industry and actively flies volunteer missions.