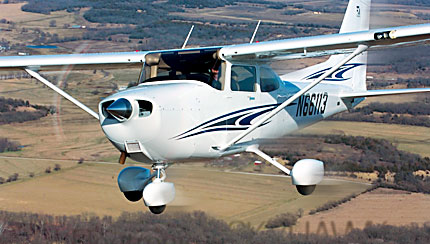 When Garmin premiered its G1000 do-everything glass-panel avionics system in mid-2003, the package was perceived as an extremely talented collection of electronic wizardry obviously intended for high-end general-aviation aircraft. Glass panels have been available on airline and corporate aircraft for years, but the G1000 expanded the technology to general aviation. Unlike Garmin’s 430 and 530 that bedeck the panels of new planes from 1999 onward, as well as 40,000 older models on the retrofit market, the G1000 wasn’t initially targeted at the aftermarket.

At an installed price at least $55,000 over and above most new aircraft base prices, it might have seemed logical that the full-featured G1000 wouldn’t infiltrate the lower rungs of new general-aviation airplanes. The manufacturers knew better, however. Models such as the Piper Archer and Cessna Skyhawk are such popular, easy-to-fly machines that many pilots who could afford more expensive airplanes prefer to stick with the simpler aircraft and equip it with enough avionics to make a GA pilot aquamarine with envy.

Accordingly, Cessna elected to offer the G1000 system in its entire piston line, all the way down to the venerable Skyhawk. The Skylane and Stationair were the first to be certified with the Garmin system; the Skyhawk 172R-GA and 172S are expected to be certified with slightly different versions of the system in Spring 2005.

As you can imagine, you don’t need many other options if you have the exotic Garmin avionics package fitted to your Skyhawk, and the Cessna 172S previewed by P&P had the full G1000, plus the new, optional, rear-seat AmSafe Aviation Inflatable Restraint (AAIR) system. The AAIR bag is a direct fallout from automotive air-bag systems and consists of an air pillow contained within the upper member of the shoulder harness. When the system detects a 16 G impact, it automatically discharges a high-pressure gas, and expands and inflates the diagonal restraint. In survivable accidents, the system is designed to shield the occupant’s head and upper torso from impact with panels, yokes, glare shields and other internal aircraft structures. Front-seat AmSafe air bags are standard on the Skyhawk, and $1,500 buys them for the rear seats as well.

If the Skyhawk is an old friend, the Garmin G1000 represents a quantum leap in the state-of-the-art, a perfect example of 21st-century technology. More accurately, the G1000 integrates a variety of navigation, communication and traffic/weather/terrain advisory equipment into a pair of 10.4-inch, active-matrix LGA displays. The primary flight display (PFD) is mounted directly in front of the pilot and provides information on attitude, heading and all flight information, while the multi-function display (MFD) is positioned at the center panel with all-navigation information, moving map, engine and electrical readouts. The MFD effectively eliminates the old-style steam gauges. (In a concession to redundancy, Cessna includes a trio of standard three-inch primary flight instruments—airspeed indicator, attitude indicator and altimeter—directly below the G1000.)

So much information folded into two flat-screen displays could pose a significant intimidation factor. Garmin avoids such problems by making the G1000 much simpler to operate than you might imagine, especially if you have experience with the company’s 430 or 530. Garmin went out of its way to make the G1000’s operating controls and readouts as telegraphic as possible, and any pilot who sits in front of the unit for a few minutes may be able to figure out many controls without a manual.

In addition to dual VHF nav, com and GPS, the G1000 incorporates a mode-S transponder with Traffic Information Service uplink. As with the 430/530, the top Garmin system provides full-color terrain mapping and weather uplink capability. Additionally, the G1000 installed on the C-172S has a solid-state attitude and heading reference system (AHRS), a standby battery and backup vacuum pump, a three-axis magnetometer, XM Satellite Weather and Radio, KAP140 autopilot and an air data computer that calculates TAS, CAS, VSI, wind direction and velocity. (Price the C-172R-GA with the G1000, and you’ll note the Garmin system is considerably less expensive than on the C-172S. That’s because the C-172R excludes the KAP140 autopilot and XM Satellite Weather and Radio.)

If you were planning to fit any Skyhawk with a G1000, the C-172S would be the logical choice. Cessna currently produces two versions of the Hawk, the standard C-172R, fitted with a 160 hp version of the IO-360 Lycoming engine, and the C-172S, boasting the same mill turning 2,700 rpm to develop 180 hp and a slightly longer McCauley prop. Both engines incorporate fuel injection to even out fuel distribution between cylinders.
Advertisement

In addition to the extra 20 hp over the C-172R, the C-172S features a 77-pound payload improvement over the C-172R, a function of the 100-pound higher gross weight and only slightly increased empty weight. Payload represents the major benefit of the 172S over the 172R. There are a few other slight benefits, all related to the extra horsepower: two knots more cruise, a 10 fpm climb increase, a 500-foot improvement in service ceiling and better over-50-foot climb performance. On the downside, the 100-pound heavier and more powerful C-172S suffers predictably higher fuel burn, less range, a stall speed that’s one knot quicker and longer takeoff and landing ground runs.

Lest you mistake the new C-172 for your father’s Skyhawk, consider that only the basic structure and configuration are the same on the 2005 version. When Cessna reintroduced the Skyhawk in 1997, the company knew it already had a winning formula, so there was little reason to mess with success. (Indeed, at the peak of production in 1976, the Strother, Kan., facility was producing nearly one Skyhawk per working hour, 40 a week, 2,000 per year. Since the beginning of production in 1956,
Cessna had produced some 40,000 Skyhawks.)

Cessna knew the difference on the new C-172s would be in the details, and accordingly, the modern generation of Skyhawks merely refine the old airplane to a finer edge. In addition to offering the most sophisticated avionics package you can buy in a light aircraft, the newest Skyhawk SP incorporates a standard, all-leather interior, 26 G seats, the aforementioned, seat-belt-mounted AmSafe air bags, high-intensity xenon landing lights and Rosen sun visors.

The new model’s cabin maintains the same 39.5-inch cabin cross-section, barely large enough to accommodate two average-sized humans, but somehow, the luxurious leather interior makes it seem larger and more sumptuous. Cabin ventilation has been updated from the old wing leading edge sliding cans to airline-style WEMACs, and the heater even seems to put out more BTUs than before.

Advertisement
Flying characteristics and performance haven’t changed much since the rebirth of the model in 1997. Under normal conditions, climb from sea level rarely will exceed 700 fpm, and service ceiling is limited to 14,000 feet, so don’t plan on topping the Rockies in the summer or staging out of Leadville, Colo. The airplane will handle most reasonable density altitude situations, however.

Level at 8,000 to 8,500 feet, the C-172S is allegedly capable of 124 knots under optimum conditions, but 120 knots is a more attainable everyday cruise. Most Skyhawk owners I know flight-plan their long trips at a block 110 knots in no-wind conditions and usually come close to their ETAs. With a maximum 53 gallons aboard and a burn of 10 gph, the Skyhawk can linger aloft for an easy four hours plus reserve, worth nearly 500 nm between bathroom stops.

A Skyhawk is appropriately among the most docile airplanes in the sky, simple to handle during transitions to and from the ground, possessed of gentle stall characteristics and generally reluctant to get mad at you. For that reason, the C-172 remains one of the most popular airplanes for primary flight training, despite the recent entry of several new trainers to the market.

The Skyhawk’s preeminence as a trainer probably is appropriate, considering the model’s incredibly passive nature during the two most challenging phases of flight, takeoff and landing. The low stall speed means it’s possible to lift off as slow as 55 knots and land at a similarly moderate pace. With 180 hp out front and 2,550 pounds to lift, the Skyhawk isn’t exactly a short-field specialist, but it will leap off in less than 1,000 feet and land in a little over half that.

In the old days, Cessna used to call the big flaps Para-Lift, an apparent reference to parachute-like landing qualities. That may have been a slight exaggeration, but there’s little question the Skyhawk returns to Earth with an ease and simplicity unmatched by most other aircraft short of a Robinson or Sikorsky. Judging the wing’s payoff, velocity isn’t much of a challenge if you’re merely awake. The airplane’s sprung steel gear is forgiving to a fault, making the actual touchdown almost too easy,
if that’s possible.

If there’s one cardinal sin in landing a Skyhawk, it may be too much speed. While approaching with too little speed isn’t a good idea, a blast of power from the 180 hp engine usually can salvage a slow approach. The big 174-square-foot wing eases the airplane down to the runway with style, provided you keep the speed at or below 70 knots. Fly approaches much faster than 75 knots, and you’ll float well into the next county.

And so, once again, the Skyhawk endures and prevails almost a half-century after its introduction. If the design seems antiquated in contrast to Cirrus, Lancair and Diamond offerings, Cessna’s airplanes continue to sell as well or better than the newer models. At Cessna, the glass remains more than half full.