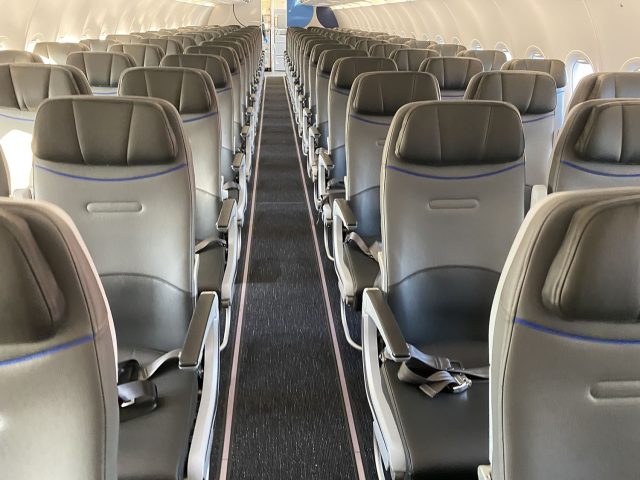 With the ban on certain travel between mainland Europe and the United States that was enforced late last week, a massive wave of effects has rocked the air travel industry, effectively dousing what had been a blaze of pilot hiring.

At the same time, huge crushes of people arriving from Europe overwhelmed designated health screening checkpoints at U.S. airports, forcing arriving passengers into densely crowded walkways with reported waits as long as six hours. Many of those passengers were American citizens or green card holders who had been under the impression that the Europe travel, which President Trump announced last week, would prevent Americans from traveling, when in fact it only targeted foreign nationals.

Delta Air Lines announced an overall capacity reduction of 40%, a plan which will park up to 300 aircraft. Employees are being offered unpaid short-term leave immediately, and it almost goes without saying that the legacy carrier, which had planned to hire hundreds of pilots this year, immediately ceased hiring, leaving pilots who had worked years or even decades to get an interview invite now told they’ll be re-invited at a later date. United and American have also drawn down their capacity. American, notably, is accelerating the retirement of its Boeing 757 and 767 fleets to get the older, less efficient aircraft off its routes.

The last month has been a mostly downhill rollercoaster ride for the industry, which had been riding high on solid profits and steady growth. The first interaction between American carriers and the COVID-19 outbreak came as Kalitta Air, an operator of Boeing 747 freighters, outfitted their birds with temporary seats and lavatories to evacuate Americans from mainland China, ground zero for the virus’ spread. The chartered flights delivered the Americans to quarantine stateside, but despite all efforts, the virus found its way to America, and the airlines’ ride hasn’t smoothed out since.

At least one airline executive told the press that COVID-19 was not impacting their airline in any meaningful way, and then the boom lowered. Fueled by misinformation and fear, many travelers showed up in surgical masks and latex gloves. Some, more fearful than others, went overboard. Passengers have been spotted wearing ponchos, ski masks, safety goggles and rain boots. Holsters of bleach wipes aren’t uncommon, and the planes are flying in the cleanest condition they’ve ever been, between the airlines’ new cleaning protocols and travelers’ “better safe than sorry” measures.

Those were the people who showed up, but many did not. Cancelations, no-shows, and reschedules racked the industry as load factors plunged from north of 90% at some carriers to empty airplanes with just a few customers scattered about the cabin. As concerts, conventions and conferences packed up their plans, the flight loads got lighter and lighter. Many business routes, such as between Boston and New York’s LaGuardia, were especially hard hit as more and more people opted to telework. Airlines are offering rock-bottom sale prices to get travelers to the airport, even as authorities advise against it.

Last week, a passenger on a JetBlue flight from New York’s JFK airport was bound for Palm Beach International, and learned he was positive for COVID-19 just before takeoff. Responders met the flight in Florida, where it sat on the ramp for some hours before the customers and crew deplaned.

Southwest’s Gary Kelly delivered a video message to his employees last week, offering a grim, frank update to the company’s situation. Suffering losses of $200-300 million per month is not a tenable position, even at a carrier that just shared massive profits with its employees and entered this crisis with a good bit of money in the bank.

Abroad, Europe’s Flybe and Norwegian have been hammered, with Norwegian announcing layoffs to half its workforce and Flybe going into administration, canceling all flights. It is worth noting that both airlines were on unstable footing to begin with.

Where does this leave the industry? At this moment, it’s too unstable of a situation to do much more than report recent developments. Speculation is rampant among the employee ranks as many fear furloughs, downgrades and possibly more consolidation in an industry where many experts were expecting one more merge before this downturn. On the other side of the coin, though, many airline executives have acknowledged that furloughs are not viable unless those pilots are projected to be on the street for more than two years.

We at P&P have fingers crossed and hope to see a speedy recovery for all affected—physically and professionally.

Subscribe today to Plane & Pilot magazine for industry news, reviews and much more.