When the Aviat A-1 Husky first took wing in 1986, it was a pretty barebones take on the Piper PA-18 Super Cub design. More than three decades later, it’s a lot more than that, as the designers at Aviat have refined the Husky’s design, proving that old dogs can indeed learn new tricks. At Sun ‘n Fun 2018, Aviat unveiled a number of substantial improvements to the Husky design. 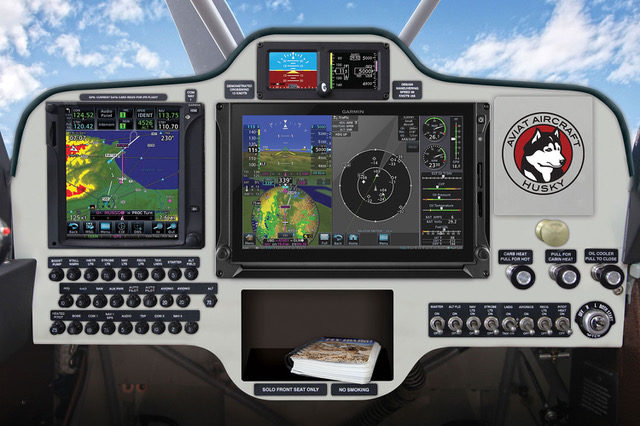 Replacing a bungee elevator trim system, Aviat added an elevator trim tab to relieve stick forces and increase stick feedback. For pilots looking to beat up the bush, Aviat added a rugged gear option. This modification extends the landing gear to propeller clearance while increasing the stance between the main wheels by 12 inches. It also moves the main gear two inches forward of the stock location, putting more weight on the tailwheel to offset aggressive braking often required for extreme short field landings.

The rear seat has been redesigned, for quick removal. With the rear seat removed and the stick cover in place, upwards of 35 cubic feet are available for cargo. The front seat now can slide forward to allow easier entrance and exit for passengers, as well as properly accommodating pilots of varying heights. The interior also received a bit of attention with new upholstery options and heated seats. Holsters for ANR headset control boxes also should help to make the Husky’s cockpit a more orderly experience.

Aviat has also added an IFR capable Garmin panel including Garmin’s remarkable new G500 TXi touchscreen display and a GTN-750 Nav/Comm/GPS to give the Husky abilities to handle weather that’s as challenging as the off airport terrain it is known for. And when you want to go hands-off to reduce workload in the weather, the option of an S-Tec 3100 autopilot is at the ready.