I’ve become a big fan in recent years of Milan Bristela, the Czech airplane designer who’s behind the shape of a few LSA on the market right now, including the BRM Bristell a carbon fiber sport plane that pushes the limits of the term “sport” with its list of quality (and quantity) of life features from stem to stern. 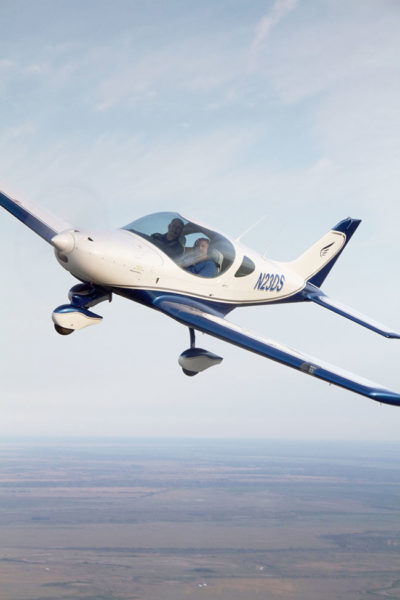 The Bristell (pronounced “bris-TELL) is nothing shocking to look at. The wings are in the usual place, the engine, too, and the bubble-hinged canopy is something we’ve all seen before. The tail, as well. Totally conventional. That said, the shape of the plane is very pleasing, its dimensions and ratios hitting the sweet spot in design we might have a hard time quantifying but know it when we see it. Beauty, right?

Functionally, the Bristell is just as cool. As an LSA, it’s limited to certain performance parameters, but there’s some wiggle room between the margins, and this plane tweaks those limitation numbers in a way that is both satisfying and utilitarian.

The Bristell was introduced in 2010, which is ages ago in LSA terms, and over that time it’s gone through a number of slight changes that have made it a little better with each one.

As you might know, Bristela’s designs are widely accepted, to the point that there are several competing versions of them in the LSA market. I won’t go into the drama behind this mix of similar designs except to say that it’s more complicated than I can or care to keep straight in my head, as well as more complicated than you probably want to hear about and not the least bit pertinent when it comes to examining the qualities of this particular LSA. The Bristell, while similar in design to a few others, is its own product with its own feel in every regard.

The Bristell is a two-seat (side-by-side), low-wing, carbon fiber, tricycle gear (a taildragger version is available, too), tractor-prop, FAA-approved Light Sport Aircraft (S-LSA). As an S-LSA, the plane is available ready to fly in both long- and short-wing versions. I flew the long-wing model. And the fit and finish are impressive, with available deluxe leather interior and premium paint.

The platform is quite versatile, and a variety of engines—all Rotax models—are available. The company is even considering the emerging, higher-powered (135-hp) Rotax 915. The model I flew was a new version, with the turbocharged Rotax 914 engine, which puts out a max of 115-hp. The plane on the cover is the Rotax 912-ULS model, which I have also flown and which I liked very much, as well.

The Bristell is an example of a product that was clearly designed with the end user, the pilot, in mind.

Getting into the plane is pretty easy, as LSA go anyway. The wing is low and the step is located just right. Depending on your height, you can step right in, grabbing onto the handholds in front and in back that were put there just for that purpose. This is, of course, unlike most planes that give you a step, a wingwalk and let you figure out the rest.

Once you’ve lowered yourself into the cockpit, you’ll notice that the space isn’t just roomy, it’s positively expansive. If you’re not super tall, as I am not super tall, the view over the panel is still pretty good. The reach for the pedals is a bit of a stretch, but not too bad. If you’re taller, you can push those pedals back with the pull of a lever and a stretch of the legs, and if you’re shorter, 5’-6” or thereabouts, you can put a bolster behind you. You can’t actually adjust the seats themselves; they’re fixed. Luckily, there’s lots of room to work with, including headroom, which accommodates tall people not just directly above but over the outside shoulder, too.

Another example of the ergo-friendly design is the throttle quadrant, which is perfectly implemented. From the normal pilot’s position, you are holding the throttle with your right hand and the stick in the left. (The stick is pretty much perfectly implemented, too, by the way). What I previously said about the rudder pedals is important, because they are truly rudder pedals and not brake pedals. The brakes are activated with a lever on the quadrant that you can manipulate with your pinky while keeping control of the throttle as you do. So you can taxi and control the brakes and the throttle with your hand while steering with the rudder pedals, which, remember, are not brake pedals. There’s no differential steering, as is more and more popular these days. The nosewheel is steerable with the rudder pedals, which cuts down on brake heating and tire wear on taxi. And if it sounds as though it would be hard to coordinate the combination of throttle, finger brakes and steerable nose wheel, and I can understand why it might sound that way, it’s not. It’s actually surprisingly intuitive. If you want to, you can go with toe brakes as an option, but owners seem to love the finger brakes.

The performance of the Bristell is, again, just right. On the takeoff roll, you push in the throttle and almost immediately start applying back pressure, and before you know it, you’re flying. It’s not so much a rotation as a levitation. When it’s ready to start flying, the whole machine is flying. Flaps are controlled by a rotary dial on the panel, and the upshot is that the flaps do something but not a lot. You can take off with full flaps or go around with full flaps, and the plane remains controllable with heavier control forces but no crazy pitch changes, even when you dump full flaps to zero right after rotation, which we did, against my better judgment but with promised docile results.

The turbocharged Rotax is a nice addition if you’re flying high, if you’re operating in hot-and-high conditions and, always, on initial climb. That all said, I doubt the 914 will be a popular alternative, as the Bristell uses so little runway to begin with and climbs so well at 912-level power settings to begin with that the additional power is hard to see a big need for. Did I like it? Yes. The difference on the close-to-standard temperature day we went flying was about 200-250 fpm better with full power, which you can hold for five minutes, compared to standard power, which is close to the 100-hp the 912-ULS or 912-iS Sport normally put out. It was a gusty day, so the airspeed and vertical speed readings were reluctant to settle in any one place. It’s not the first such flight for me.

At cruise the Bristell is fast, as fast as an LSA is supposed to be. Its max speed is 120 knots indicated, so technically if you were really high and the 914 was continuing to put out a high percentage of its rated power in the much thinner air, one would think you’d be able to max out at an impressive true air speed while maintaining 120 knots indicated, but that is not the case, as the airspeed is limited by the fixed pitch prop. It is likely that new constant-speed prop options will be approved for LSA in the US at some point, as they already are in Europe, where Bristell drivers are getting just a hair under 140 knots true at cruise.

In cruise, the visibility is superb, the noise is low, the fuel burn is less than 5 gph and the seats are really comfortable. For longer trips, you can still bring a lot of bags, with two 44-pound max weight storage lockers in the wings and another 44-pound shelf in back.

My demo pilot for the flight, John Rathmell from Bristell, talked of the customer for this type of plane, and he is of the opinion that it’s a good replacement for a lot of different kinds of airplane. It’s fast enough, it’s very comfortable, it’s got a good range and lovely flying manners. And he’s got a point. The Bristell, well made, pretty and good performing, is a compelling package.

In terms of landing behavior, the Bristell is a pussycat when the wind is calm or light but a handful when it’s really blowing, as it was when I flew the plane most recently. The wing is long and generates a lot of lift, so when a gust hits it, the result is immediate and strongly felt. That means that carefully controlled landings when it’s gusty can be tough to pull off elegantly, which is true in any airplane but more so in LSA, which have a very low max stall speed in the landing configuration, 45 knots, as mandated by the FAA. The Bristell’s landing stall speed is just a hair over 30 knots with the long wing.

Bristell loves going to air shows and giving pilots demo rides because they know that once a pilot gets behind the stick of one, they’ll understand the plane in ways that will cause them to give LSA in general, and the Bristell specifically, a much longer and closer look.