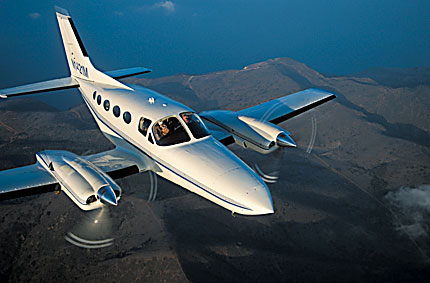 Some pilots will do anything, use any subterfuge and resort to any rationalization to justify buying an airplane. With that said, Pat Cattarin’s excuse is more than a little over the top. He bought a late-model 421, specifically to transport dogs.

Before you scoff and proclaim Pat as the king of the domestic con artists, consider that he really does use his 421 to transport dogs much of the time (and no, he doesn’t even try to write it off). Like me and probably a billion other folks on the planet, Pat and his wife, Carol, have been dog lovers all their lives. They’ve owned a succession of canines for the last 40 years and have developed a passion for a particular breed—greyhounds.

As it happens, greyhounds often need all the help that they can get. They’re naturally trim and athletic, and they’re the fastest of all the dog breeds. Dog racing is legal in the U.S. and Mexico, which can be both good and bad news for greyhounds. The wiry canines can accelerate from a standing start to 45 mph in three seconds, quicker than most sports cars, Their incredible acceleration and speed provide exciting diversions for all race fans in several states. Dog races pit greyhounds against one another by having them chase a mechanical rabbit around a half-mile oval track.

On the good side, all breeders are constantly trying to improve the greyhound bloodlines, always striving for more strength and speed. On the bad side, however, the emphasis on speed over all other concerns and considerations means that many dogs burn out quite young and are retired from dog racing before they’re even three years old. This results in a disproportionate number of greyhounds that lose their commercial usefulness quite early in their lives and that have questionable futures when they’re no longer competitive racers. The huge problem is especially acute at the dog tracks in Mexico, where budgets are tight, and old, injured or retired dogs often must be destroyed.

Both Cattarins became interested in rescuing greyhounds about six years ago, when they were flying their own Piper Seneca II. They’re both pilots, and together, they’re business partners (with a handful of other investors) in the Palm Springs, Calif.-based company, California Pools and Spas in the Coachella Valley.

“We were looking for a slightly different application for our airplane,” explains Pat. “And simply flying out during the weekends on hamburger flights had long since lost its attraction, and we wanted to do something unusual, something worthwhile. Dogs have always been a huge part of our lives, and so, creating the Greyhound Express seemed a natural fit for us.” 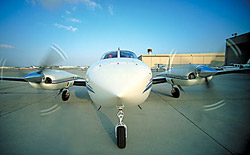 The Cattarins’ primary contact for Greyhound rescue was Tom and Joyce McRorie of La Habra Heights, Calif., longtime members of Greyhound Pets of America, which is the largest dog-rescue organization in the world. The McRories had been rescuing dogs from the Agua Caliente Dog Track in Tijuana, Mexico, for nearly a decade. They would drive to Tijuana, arrange for the necessary shots and health treatments, bring the dogs across the border and board them at their metropolitan Los Angeles home, until they were ready to be adopted.

“The problem arose when we were all ready to move the dogs to their new homes,” says Joyce. “We placed greyhounds all over California, Arizona, Oregon and Nevada, and that often generated hours or even days of driving. In several years, we logged 100,000 miles transporting greyhounds around the southwestern U.S.” Even with help from dedicated Northern California greyhound lovers, such as Scott and Ann Sanders of San Jose, Calif., or Jim and Gay Holst of Reno, Nev., the trips were a grind.

The Cattarins instantly had the solution to the problem. “When Pat and Carol volunteered their Piper Seneca for greyhound transport, our lives changed for the better,” continues Joyce. “Rather than have to drive the dogs thousands of miles each year, we simply meet the Cattarins at a local small airport, usually Fullerton or Long Beach, put the dogs aboard, and they transport them all over the Southwest at no charge. With their twin-engine airplane, they can fly distances in a few hours that would take us a day or longer to cover. We still must deal with the political paperwork of bringing the dogs into the U.S. from Mexico, but the Cattarins’ airplane has relieved us of much of the logistical problem of getting the dogs to their new homes.”

Pat loved his Piper Seneca II, but after starting the Greyhound Express, he began looking seriously at pressurization. “For my money—and I did spend a bunch of it buying and equipping the Seneca—the turbocharged PA34 is the best airplane in its class,” comments Pat. “Trouble was, there was no way to get oxygen to the dogs if we needed to fly high, and that was a major concern. Our family dogs were a special problem. Carol and I fly back and forth across the Rockies several times a year to our place in Litchfield, Minn., which often necessitates operating at 17,000 feet or higher to meet IFR MEAs. On those trips, our dogs would simply curl up in back and go to sleep. Our veterinarian didn’t think there was any problem, as we usually weren’t above 14,000 feet for more than one hour or two, but hypoxia was still a constant concern. If we won’t expose ourselves to those altitudes without oxygen, how could we subject our dogs to the same conditions? As much as I loved our Seneca, I finally decided that I needed a pressurized airplane. I was inclined to buy another Piper, but since the Pressurized Navajo was the only one with a big cabin, I decided to shop for a 340, 414 or 421.”

Pat felt that he had quite a perfect application for the Cessna 400 series’ big cabin, so he quickly narrowed the search to the Chancellor and Golden Eagle. “The Cessna 340 appeared to be a good airplane, but the Cessna 300 series cabin was a little small for our purposes. The Chancellor’s huge cabin and direct drive engines were attractive, especially the RAM VII conversion that pumps power up to 335 hp a side, offering performance almost equal to the 421, but with lower fuel burn and maintenance.”

“I knew all about the Cessna 421’s reputation as a hangar queen, especially with those big, geared, 375-hp, hand grenade engines,” admits Pat, “but the extra performance and the higher pressurization differential were too good to pass up.” The 421 offered a 5.0 psi differential compared to the 414’s standard 4.2 psi, pumping up the cabin with more oxygen-rich air.

After a year-long search for the ideal airplane, Pat located a low-time 1976 Cessna 421C in good condition, and he soon began transporting his consigned greyhounds in style and panache. Both the Cattarins fly dog-delivery missions once or two times a month and, between the Seneca and the 421, they’ve relocated nearly 150 dogs in the last five years.

Despite his initial reservations, the pool executive admits that he has fallen in love with the big Cessna 421. Now that he has owned it for quite a while, he feels that the Cessna Golden Eagle’s reputation for high maintenance is greatly exaggerated.

“It’s certainly not an inexpensive airplane to keep in the sky,” he confesses. “At maximum cruise, I’ll burn 40 gph, one good reason not to use max cruise. Still, the 421 isn’t nearly as bad as I had heard. It’s important to adjust power slowly and keep from shock-cooling the engines under any circumstances, but if you do fly the engines intelligently and according to the book with medium power settings and reasonable TITs, the engines run very well and are fairly reliable.”

Pat bases his own Cessna 421 at Thermal, Calif., a few miles north of the Salton Sea, so he often must deal with high outside air temperatures in the summer, frequently in excess of 110 degrees F. Cruise climbs are the hard-fast rule with lots of fuel to cool the engines. In standard conditions, he sees 1,500 to 1,700 fpm in initial climb, 1,200 fpm through 15,000 feet.

Pat operates his Cessna 421 in the high teens or low 20s, where the air is smooth and the weather is below him. “The Cessna 421 is a Mercedes, with smooth controls, excellent stability and a wide cabin. The air conditioning is quite a wonderful feature, which works well for us in the summer.”

The boss of Greyhound Express says that the Cessna 421 is plenty fast enough for his own purposes. “Above 20,000 feet, I can true at 210 knots most of the time, and that makes short work of dog-delivery trips to San Jose, Reno and Sacramento fairly common destinations for us. We have the big tanks, 271 gallons total, so even at 35 gph, I can stay aloft for six hours and still have plenty of reserve.”

The Greyhound Express typically carries three to five dogs at one time, although it has transported as many as eight canines. Carol takes care of the dogs in flight and leaves the flying to Pat. “These dogs have great temperaments,” she explains, “and it’s quite rare to have a problem during flights. They’re generally quiet animals with more curiosity than fear of flying, and it’s quite a rarity for one to get sick. They’ve been well-trained to be well-socialized to humans because of their dog-racing experience, and they tolerate new people and situations quite well. A few years ago, we did have a dog fight in the back of the airplane, and that was scary. As a result, all dogs we transport now are muzzled, and we’ve had no problems since then.”

For the Cattarins, transporting these dogs is a labor of love. “We love to fly and we really do love these animals,” says Carol, “and if our small contribution helps put them in good homes, we’re happy.”

Pat agrees. “We’d be burning up avgas to no purpose if we weren’t flying greyhounds. This way, we’ve actually accomplished something, instead of boring holes in the sky.”