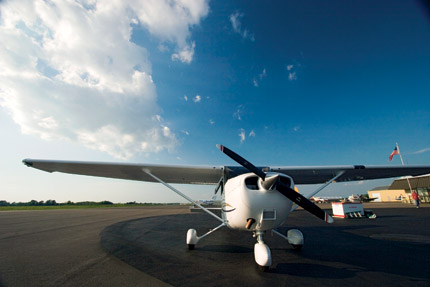 I have a friend who recently began flight training in a Skyhawk. Pete is one of those future pilots you just know won’t have any problems with the private-pilot course. He knows cars, drives a Porsche, understands things mechanical and doesn’t have any inherent fear of attitudes more complicated than vertical (standing up) and horizontal (lying down).

Money isn’t a problem for Pete, but like any successful professional, he didn’t get where he is today by throwing it away. He wants to learn as quickly and efficiently as possible without spending an inordinate amount of money. For Pete and thousands of other pilots, the bottom line is the wet rental rate.

At this writing, Pete has about 20 hours, and he probably has 30 to 40 hours to go before he receives his private ticket. He asked me the other day whether he’d be better served to switch to a two-place single or stay with the larger, more powerful Cessna Skyhawk. (Pete and I are involved in AOPA’s Project Pilot mentor program, so I try to take special care in advising him on things aeronautical.)

Dedicated trainer or basic four-seater? That’s today’s question. It’s a common enigma, if only because the Skyhawk has practically become the trainer of choice in most flight schools since the permanent demise of the Cessna 152.

In Pete’s case, he’s hoping to purchase a Saratoga TC as soon as he’s licensed and insurable. Partially for that reason, I suggested he stay with the slightly heavier, four-seat Hawk until he’s earned the private. Another good reason is that it’s rarely a good idea to switch horses midcurriculum.

One obvious benefit of the Skyhawk, over virtually everything else, is simple availability. With something like 38,000 built so far, there’s a veritable plethora of used 172s available, and they’re perhaps the most popular—i.e., “inexpensive”—one-size-fits-all flight-school airplanes.

Through the lean years of the ’80s and ’90s, Skyhawks were near-perfect candidates for cash-strapped flight schools trying to turn a profit while keeping inventory and payments to a minimum. The type is as talented at training new pilots as it is at transporting more experienced, licensed aviators. That alone imparts an economic viability and flexibility uncommon to other types.

Refine the question to “Which new airplane makes a better trainer?”—especially for a private buyer rather than a flight school—and the answer becomes a little fuzzier. The higher price of admission, more significant insurance considerations and higher operating costs make the buying decision more difficult.

For its part, the Skyhawk is about as idiotproof as possible. That fact has been demonstrated time and time again by Safety Board accident reports. The Hawk consistently holds the best safety record of any personal aircraft in a training environment. In one study, the FAA compared 32 of the most popular general aviation aircraft in 10 safety categories, and the Skyhawk scored top honors in eight of those 10 classes.

Part of the reason for this is safety by design. The fuel system has “left,” “right,” “both” and “off” positions, but many operators simply place the selector in the “both” position when they pick up the airplane at the factory and leave it there forever. There are circumstances that might dictate burning down one wing tank or another asymmetrically, but most pilots never encounter those problems. The wing is mounted above the engine, so the standard engine-driven pump provides all the necessary fuel pressure. There’s no reason for a supplemental electric fuel pump.

If you do need to make an emergency landing, dirty stall is below 50 knots, and with the advent of air bags, people in cars have survived head-on collisions with bridge abutments at that and higher speeds. (In any case, in the event of an engine out, most pilots don’t aim for bridge abutments.)

The wheels and prop are fixed and so are the wings, attached to the top fuselage by large bolts and braced at the bottom with stout struts. With such a tough structure, in-flight structural failures are ridiculously rare.

The 2008 Skyhawk 172R comes standard with an injected IO-360 Lycoming engine, which is rated at 160 hp just like the carbureted O-320s of old. The difference is that you can buy a hopped-up version of the Skyhawk rated for 180 hp, the 172S. (In fact, that may be the dominant piston model for 2008.) The Skyhawk S offers two knots more cruise and a slightly higher service ceiling, but the biggest advantage is 70 pounds more payload, boosting the airplane to a true three-place machine. If you operate from airports at medium altitudes, you may also appreciate the slight improvement in climb.

Cessna is now delivering the Diesel Skyhawk, a 172 powered by a German Thielert Centurion 2.0 turbodiesel engine. Diesels capitalize on the nearly universal availability of jet fuel and may be the wave of the future as some oil companies stop refining avgas, supplies shrink and outlets become more scarce.

That’s an especially critical consideration in places like Africa, the Middle East and Malaysia, where it’s inconvenient to stock two types of fuel. Essentially a follow-on product to the Centurion 1.7 used in pairs on the Diamond Twin Star, the Centurion 2.0 is a FADEC-controlled adaptation of a dual overhead cam, four-cylinder Daimler-Benz automotive mill that burns jet fuel and is capable of maintaining sea-level power to 8,000 feet. Service ceiling is 16,000 feet, 2,500 feet taller than the Lycoming model. Cruise performance is about the same with nearly identical range and payload and slightly less sea-level climb.

Specific fuel consumption (SFC) is 25% better than in the piston engine, and time between replacement (TBR) on the Thielert is 2,400 hours. (The German manufacturer isn’t set up to overhaul engines, and, therefore, the diesel wasn’t certified for overhaul, only replacement.) An extensive midlife check at 1,200 hours is included in the price.

Advertisement
The Skyhawk R’s standard 160 hp piston engine is reliable to a fault. Given reasonable care and feeding, there’s very little that can go wrong in normal service. Yes, things do sometimes break, and catastrophic failures are always possible, but the same basic engine has been around for more than 40 years and has generally had an excellent service record. Also, keep in mind that this is the most derated version available, so it’s not being asked to work very hard. 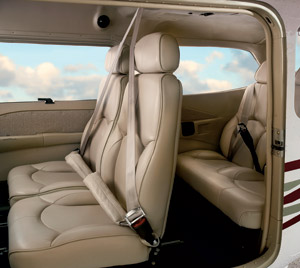 These days, it’s difficult to talk about the Skyhawk without at least mentioning the Garmin G1000 flat-panel avionics suite, coupled with the GFC 700 autopilot. More and more manufacturers are installing the G1000/GFC 700 as standard equipment, and once you fly with it, you’ll understand why. Once you overcome the system’s intimidation factor and understand its computer-logic base, you’re almost guaranteed to love it.

If you’re one of those folks who likes to analogize flying with driving, you’re bound to find the Skyhawk an easy ride. It has doors on both sides, just like most coupes. Strapping in with the AmSafe seat-belt-mounted air bags is easy, and once you’re settled in, the airplane is comfortable and controls are friendly. Though the Skyhawk’s interior wasn’t fashioned around a BMW’s (more like a Mini Cooper), the airplane’s 39.5-inch horizontal dimension up front is adequate if not excellent. A Bonanza scores 42 inches, a Mooney, 43. In partial redemption, the roof is 48 inches from the floorboards, to accommodate tall aviators.

Pilots don’t buy Skyhawks to fly fast, but the type will step along at 120 knots if you’re doing everything
right in smooth skies.

Engine start is simple, even in hot weather, contrary to uninformed popular belief. The book procedure works about 95% of the time, and a flooded start will usually solve the problem the rest of the time without grinding the battery down to nothing. Taxiing doesn’t demand any special talent. The steerable nosewheel provides good directional control, and the airplane isn’t prone to upset in crosswinds. Rough ground or dirt strips may transmit some minor bumps through the steel tube gear, but prop clearance is good and the wheel fairings are forgiving as long as the dips are no more than a few inches.

From a student pilot’s point of view, the transition from ground to sky is fairly basic. Once the wings gather enough lift, the airplane will fly itself off the ground with almost no help from the pilot, and there’s little pitch change necessary to transition to climb. Nothing happens especially fast, all the better for new pilots trying to adapt to three dimensions.

Roll and pitch response are similarly unchallenging, quick enough to get the job done, but not so fast as to overwhelm students and other inexperienced pilots. Like many of you, I’ve logged several hundred hours in Skyhawks, and if the type’s climb, cruise and handling are fairly me-too, you have to marvel at how easily the airplane drives around the sky. The Skyhawk is an absolute master at doing exactly what you tell it to do—nothing more, nothing less.

Pilots don’t buy Skyhawks to fly fast, but the type will step along at 120 knots if you’re doing everything right in smooth skies. With 53 gallons in the tanks and a flight-plan burn of 10 gph, you can plan easy four-hour trips out to nearly 500 nm with reserve.

New pilots sometimes fear stalls, but there’s no need for apprehension when flying a Hawk. The flaps are huge and reduce no-fly velocity to well below 50 knots. Best of all, the Skyhawk seems relatively impervious to being manhandled. The design is so docile at low speed, stall-spins are practically nonexistent.

The low stall and supreme controllability to the very bottom of the envelope make the 172 a good short-field airplane (demonstrating what Cessna used to call its “Land-O-Matic” gear). The relatively fragile nosewheel doesn’t lend itself to operation on rough strips, but I used to see an occasional Skyhawk flying the boonies in Alaska when I lived there back in the last century. Taildragging Cessna 170s and 180s were more common in the bush environment.

For student pilots interested in buying a Skyhawk and learning in their own airplane, Cessna has a program in place to help offset the cost of training. It’s called the “Flying Start” program, and it will refund $3,000 to any buyer who earns a private or instrument rating in his or her new Skyhawk. In most training markets, that sum should easily pay for all the instruction to the private ticket (with money left over to help offset costs of course materials, medical certification and perhaps even the flight test).

For those current pilots looking for a relatively tough and unchallenging airplane or students just discovering the sky, the Skyhawk continues to be one of the most popular weapons of choice. It’s an easy-flying trainer with reasonable climb and speed, plus it’s one of the least intimidating singles in the sky. And in a pinch, you can even load up the wife and kids, and take a vacation in the Bahamas.