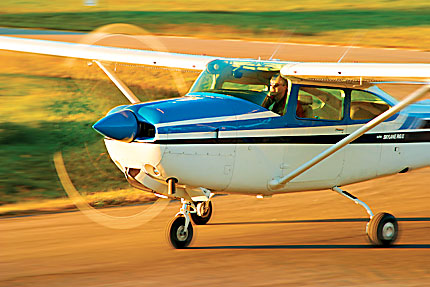 There will always remain some argument about the birthplace of aviation. It seems to be either North Carolina, where the Wrights finally flew, or Ohio, where all the hard work was done before history was made at Kill Devil Hill, N.C. Wichita, Kan., is like Dayton, Ohio. It’s the unsung birthplace of general aviation in the United States. Back in the good old days, almost all the airplane manufacturers had plants there; this was where the work was done for the rest of us to fly. Lloyd Stearman started there—he built airplanes with folks like Walter Beech, Al Mooney and Clyde Cessna. Huge numbers of airplanes flew out of Wichita during World War II. Today, Beechcraft/Raytheon, Boeing and Cessna (www.cessna.com) still make airplanes in Wichita, ranging from piston-engine singles to multi-engine jets. It’s also the town where Rod Lowe grew up.

Lowe’s father, a World War II B-17 and B-29 radio operator, worked for Cessna. Cessna and flying were in his blood. “My dad joined the Cessna Flying Club and learned to fly. It was an incredible deal—you could fly for virtually the cost of fuel,” says Rod.

Rod worked for Cessna as well and joined the Cessna Flying Club right away. “I started in C-150s for my private and then moved to the C-172s and C-182s. The club had C-206s and high-performance airplanes, like the C-210 and turbo 210s. We’d fly to Colorado to ski during the weekends with friends. I had a great time!” he recalls.

Along the way, Rod married Donna, who was supportive of his flying and liked the freedom that it provided, in no small part because they didn’t have to drive for hours to get out of Kansas. Rod says, “The club had several Cessna 182RGs. I did my commercial license in one because of the retractable gear and constant-speed propeller. Before long, Donna teased me that I was spending as much money at the club as it would cost me to own an airplane. At first, I was skeptical, but she worked the numbers, and it was cheaper. We bought our first airplane, a really nice 172 Skyhawk.”

With their own airplane, both Rod and Donna took to flying in a big way. Rod clearly remembers, “Our kids grew up in airplanes. It was like a car. Our first child flew at four weeks old, and our second at eight weeks. When we moved to Dallas, the airplane allowed us to stay in touch with our families. We were doing so much flying that Donna decided she needed to learn how to fly. She sold her Corvette and learned how to fly in our Skyhawk.”

With a growing family, Rod bought a Cessna 182 Skylane. “It was faster and carried more. With four of us, for sure, we needed the room,” he explains.

With a new airplane came the move to Albuquerque, N.M. The high altitudes of New Mexico challenged the Skylane, which was perfect for flatland flying, but it became anemic on hot days. “We took off once in the Cessna 182 from the big airport and it took us a long time to start climbing. Donna poked me in the ribs and said, ‘Okay, you made your point. Go ahead and climb.’ I told her I’m not doing this on purpose. We’ve got to get some speed up before we can climb.”

The normally aspirated Skylane’s high-density altitude performance then provoked Donna to crunch her numbers again. With a valid need for a completely new airplane (for Rod, Cessna was the only real option), he began looking for a turbocharged Cessna 182RG. According to Rod, “This airplane is a sleeper—with the turbo and the retractable gear, it just makes a huge difference. I looked at Bonanzas, C-210s and whatever, but for speed and high-altitude performance, there really is no choice. Cessna just builds one heck of an airplane.”

“We bought N756GZ in 1993,” says Rod. “It’s now our fourth airplane, and we couldn’t be any happier. Just maybe one day when we’re ready to slow down, we’ll go back to a straight-legged Cessna 182. But for now, this airplane couldn’t be better for what we do.”

Cessna has taken an evolutionary approach to building airplanes. If something works on one airframe, it will just adapt it and make it better on others. The company has been successful using this approach. Cessna started building C-120 and C-140 two-seat taildraggers. They saw a need to fill an expanding business market and built the four-seat 170. Now, virtually all of Cessna’s single-engine line can trace all their roots back to the venerable Cessna 170. The Cessna Skywagon, the C-180 and, later, the C-185 were upgraded versions of the 170, with improved weight, horsepower and interior volume. The Cessna Skyhawk was a tricycle-gear 170, and the Skylane was essentially a tricycle-gear version of the 180/185 taildragger. It was simple to manufacture and maintain, with each airplane retaining docile flying qualities and prodigious performance numbers.

The Cessna turbo Skylane is quite the perfect evolutionary airplane. Cessna took the standard Cessna 182 and inserted a retractable-gear system, adding 12 to 15 knots. But the company wasn’t finished yet; it installed a manually controlled turbocharger to a reliable Lycoming O-540 engine for an extra boost and punch at altitude, which gained another 20 knots. Overall, the turbo Skylane RG achieved a performance gain of nearly 35 knots over standard Skylanes.

Rod uses the Cessna 182 several times a week. He explains, “The turbo Skylane has a 92-gallon wet wing, which is usually much more than enough fuel for both me and my wife. Nowadays, I fly about 100 hours a year and it’s strictly for pleasure. The trickiest thing to the turbo is the manual waste gate. But it’s easy once you accept that you have to watch it. An over-boost of more than 31 inches usually occurs on takeoff, especially on cold days. You just have to pay attention.

“I never wanted to be a professional pilot; I just really love the freedom of flying. I’m sure sold on the Cessna 182. It’s amazing how much you can pack in with the airplane flying just fine. I had an engine failure once in another Cessna, and I put it down in a field just fine. The airplane glides really well, and with the turbo and retractable gear, it has amazing performance. This is a wonderful airplane in which to carry anything my wife and I want to pack and go anywhere we want. Best of all, we can go just about anytime we want to go!”