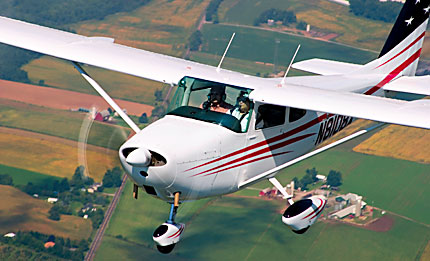 There are those seeds, like Jack’s, that explode overnight into giant beanstalks. And there are those, indigenous to certain biospheres, that only germinate when exposed to fire and, so, possibly wait for years to grow.

For Peter Petrus, young A&P student, the fiery seed that would change his life was planted in 1961. An East Coast transplant and full-timer at Northrop Aviation School in California, he cocked his hat toward an aircraft mechanic’s license, hoping to make a living in the “exciting aerospace industry.”

America’s space program was finally underway, in pursuit of Sputnik. John F. Kennedy had called the country to order and, like Babe Ruth and his immortal point to right field, refocused our dreams on the moon.

One day, Petrus came face to face with a new silver and black 1961 Cessna 172B. That moment burrowed deep into his subconscious, to be rekindled in the fires of opportunity many miles and years later.

“It was my first contact with a brand-new airplane. I never did fly it—they wouldn’t let anyone near it!—but I fell in love with it and decided someday I’d own one.”

Life has a way of throwing clear-air turbulence at us when least expected. Petrus got his A&P ticket, but a slumping aerospace industry sent him back to his native upstate New York in 1964. Once there, “I went looking to go flying again.”

Nedrow Airport, near his home in Syracuse, had a countrified 2000-foot runway, two C-172s “and three engines. I paid for my flying lessons by overhauling those engines.”

Petrus also learned more about the 172B that had bored its way into his dreams. “The ’60 through ’62 models were unique. They had the modern, swept tail fin but no rear window, which gave them a sexy look.”

With a family of mouths to feed, a growing machining business to run and a mortgage and car to pay for (the full catastrophe), any notions of attaining a Cessna 172B were dampered.

Flash forward three decades to 1997. At last free and clear financially, an older, wiser version of that fresh-faced A&P took a flight one day in the Piper Archer he co-owned with friends.

The bird didn’t quite have hay hanging from the wheels, but from its appearance, it was clearly a working plane. It was also identical to the brand-new plane Petrus had seen three decades ago, right down to the silver paint with black trim.

Petrus chatted up the owner and found out that the man, as farming folk are wont to do, performed all his own repair work. “He even put auto parts in it, including a voltage regulator from a ’49 Ford!”

But it was readily apparent to Petrus’s A&P-trained eye that the airplane was in excellent structural condition, with about 1,900 hours total time.

“The fella thought he might sell it in a few months. I gave him my number, went home and forgot about it.”

One day, six months later, the phone rang. It was the farmer. He was ready to sell.

Petrus rolled across the snowy March countryside to the farmer’s spread in Ticonderoga, N.Y. “I spent six hours going through the plane. The flight logs were a mess. Engine was at TBO, and he’d replaced it with a 700-hour mill. A local A&P vouched for the plane. I bought it, the original engine and a prop for $20,500.”

As a kitchen dish rag will do when placed too near a stove burner, the seed that had smoldered inside Petrus for so long, at last, burst into flame. Instead of flying the 172B and working on it piecemeal, “before long, I had about every single nut and bolt out of it.”

With his son Andy and good friend Gerry to help, the conflagration raged in a rented hangar space at Oswego County Airport. “We worked almost every weekend for a year.”

Once the 172B was in good flying condition, the flames had spread from Petrus’s medulla oblongata to the frontal lobes. “I decided I wanted a modern panel in it, including a nice center radio stack. So I cut the whole panel out and bought a conversion kit from Avion Research in Sunnyvale, California [www.avion.com]. They give you all the sheet metal, you fit the instruments in and tell them where you want the holes, then they cut and drill everything for you.”

Soon the project was a six-alarm, three-county blaze. The panel got stuffed with every flyboy’s dreams: a King KX-155 Nav/Com, II Morrow GX65 GPS with CDI, Narco Transponder, King KR-86 ADF, new airspeed, artificial horizon, altimeter, turn and bank, vertical speed and directional gyroscope. Still, there were no fire trucks in sight, because, as Petrus relates, “once I got the panel in, well, the interior just didn’t look so good.”

With the supervision of his new friend Dave Light, a local IA, Petrus blazed away with the rebuild and worked on the interior. “In fact, I did all the work except the painting. When the inside was done, it looked so good, I just had to continue to bring the outside up to snuff.”

After three more years, which saw everything from new seat rails, a one-piece windshield and new mufflers to a Horton STOL kit with flap-gap seals, everything but the paint job (whew!) was finished.

Anybody who’s painted an airplane, new or old, knows that there’s a fair amount of prep work involved. “It took tons of hours. I removed every nut and bolt; put in a lot of new hardware. Every item was inspected and put back right or replaced.

“Then I decided to take the spare engine, overhaul it and put in brand-new cylinders, mags and carburetor. Finally, with the engine done and mounted, I buttoned it all up and flew it to Aircraft Refinishers of Western New York [www.aircraft-refinisherswny.com].”

By the time it was finally finished, both Gerry and Andy had earned their licenses in the 172B—all part of the original deal. And, with most of his brain now completely consumed by flames, Petrus could step back, admire the work and enjoy the flying. Right? Wrong.

“I put a couple more goodies in: a fuel flow meter, digital tach and, oh yeah, a full IFR panel.”

In the end, Petrus experienced the bitter taste of passion’s ashes. “I walked around it for months wondering what I could do next, because I’d done a pretty thorough job.”

Wouldn’t it have been easier to just buy something similar back in ’97 and save all the restoring work?

“Well, you start out conservative. You have this idea to spend a few bucks, so you buy something old. You mean to just fix it up and fly it to those $100 hamburgers. But because I’d been smitten with the 172B so long ago, nothing was going to stand in my way. I wanted it right.”

So, what’s a guy to do when the fire burns out?

Start another fire. “I went out and bought a Glastar Sportsman [www.newglasair.com].”

Any advice to pass along to the similarly afflicted—other than don’t get afflicted in the first place?

“Yes. A key is to make a budget list of everything you want to do to the airplane. Most people rebuild to save a bunch of money, which usually turns out to not be true. So, be strict about what you’re going to pay, and when you get there, either stop or marry a very rich person!”

It helps to have some expert guidance along the way. “I was very lucky to have Dave Light, an FAA-designated inspector. He shepherded me through the whole project.

“I’d also suggest joining Cessna Pilots Association [www.cessna.org]. That was the first thing I did. I called them every other day. They’re a fantastic group. I got hooked on eBay and bought a lot of stuff there too.”

Don’t forget the fringe benefits: an airplane that will bring top dollar on the market, and mondo bragging rights.

“I’m pretty much a local flyer—I keep within a 500-mile radius. But everywhere I go, folks come over and look, smile and praise it. I meet a lot of new people that way.”

For Peter Petrus, many green northeast fields have slipped beneath the wings since that day in 1961 when a seed was planted. There have been $100 hamburgers, lots of smiles, two newly rated pilots and winged dreams still to be realized.

Such is the nature of seeds that wait for fire.