If you fly a typical general-aviation airplane, you probably can’t imagine a world without avgas. I fly a Mooney with a four-cylinder, 200 hp Lycoming, and there’s currently no alternative engine available. For me and for thousands of other aircraft owners, the thought of avgas becoming obsolete is simply inconceivable.

Unfortunately, the reality is that avgas may not be with us for more than another decade. Mobil is already backing out of the avgas business, and several other companies have significantly reduced production and would love to find an excuse to cease refining avgas altogether. 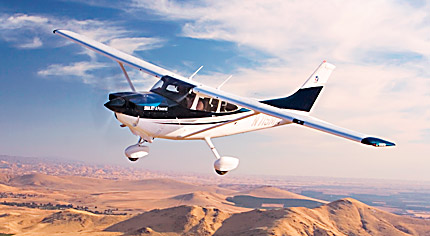 Face it, volume is profit in the energy business, and avgas has always been one of the lowest-volume fuels on the market. If you fly an airplane that can’t readily be converted to use car gas, you may be faced with some tough choices in a few years.

That’s one strong reason behind the emergence of diesel engines in general aviation. “Discovering” diesel power for airplanes in late 2005 is perhaps a little surprising, as the diesel engine is one of the world’s oldest internal combustion engine concepts, dating back to Rudolf Diesel’s 1894 patent in Germany. Diesel invented an engine that utilized high-compression air (typically about 15 to one) mixed with diesel fuel to cause the explosion that generates power. The diesel engine, therefore, did away with spark plugs and instead employed an extremely hot charge of air. Most piston engines operate with a lower seven-to-one or eight-to-one compression ratio.

Diesels have been on the periphery of aviation for decades. A quartet of 1,100 hp Daimler-Benz diesels powered the Hindenburg, but there’s been little diesel engine development for fixed-wing aircraft. Diesels can burn practically any combustible liquid—obviously diesel fuel, jet fuel, avgas or mogas, and even pure kerosene (though not very efficiently).

The dominant aviation fuel these days is Jet A, and diesels run just fine on it. Several companies have taken the lead in developing diesel engines for aircraft. One of the oldest is France’s SMA, now a subsidiary of the French jet engine conglomerate SNECMA. SMA began developing an aviation diesel engine in 1998 and earned FAA certification for its first product in May 2005.

That first product is the SMA SR305-230, a 230 hp, four-cylinder, turbo diesel powerplant that’s been installed and flight-tested in a totally refurbished 1980 Cessna Skylane. I recently spent a day flying that airplane with Rick Rossner, president of Tule River Aero-Industries in Porterville, Calif. Tule River Aero has been modifying airplanes for seven years, primarily the pressurized Riley Skymaster, so they know what’s involved in a complete engine makeover. In this case, Tule has transformed a fairly pedestrian 182 into the standout, SMA-diesel-powered Cessna you see on these pages.

SMA is currently pursuing STCs for seven aircraft models, including the Piper Dakota and Seneca, Socata Trinidad and Cessna Skyhawk. The company is also developing six-cylinder, 300 to 350 hp models for possible use on large singles and medium twins. (There’s currently an experimental, diesel-powered Duke flying in Europe.)

One look at the Diesel Skylane’s cowl is enough to convince you that there’s something quite different going on forward of the firewall. In fact, everything forward of the firewall is different. The conversion kit has new engine and prop parts and accessories. Even the battery is updated, and the landing light has been removed from the cowling and mounted on the wing, similar to the design on the new-generation Skylanes.

The SMA engine is air- and oil-cooled, and the combination of induction and cooling air demands four large inlets. The three-blade prop is an MT or optional Hartzell specifically designed for the diesel engine; it’s intended to provide maximum torque at the constant 2,200 rpm for climb and cruise.

SMA boasts a parts count that’s roughly 70% less than the comparable O-470U Continental. That should guarantee lower maintenance costs. TBO is currently set at 2,000 hours. Rossner reports that the company is hard at work on a higher TBO, and SMA hopes to have its TBO upgraded to 3,000 hours by the year’s end.

From the firewall aft, there are few differences other than engine instruments and controls and bigger fuel filler openings atop the wings to accommodate the larger jet fuel nozzles. The panel includes changeouts of several gauges: manifold pressure, tachometer, oil pressure and temperature, cylinder head temps, turbine inlet temp and fuel level (graduated in pounds rather than gallons).

The SMA diesel utilizes an engine control unit (ECU) with a full FADEC system to maximize performance and efficiency, so in essence, the only operational engine control is the throttle. There’s a prop control on Hartzell-equipped airplanes, but its sole purpose is to cycle fresh oil into the governor during the run-up prior to takeoff. The ECU automatically maintains rpm at 2,200.

As is typical of diesels, engine start requires the pilot to activate the glow plugs, one per cylinder, and initiate the start when the annunciators indicate the plugs are up to temp. In fact, on a typical Southern California day, you may not even need to activate the glow plug, as the engine will fire by simply engaging the starter. Similarly, hot starts aren’t cause for concern in a diesel. The engine starts pretty much the same, hot or cold.

By the time you reach the run-up area, there’s little to do but fly. The sensations of takeoff aren’t that different from those in a standard Skylane, provided you ignore the manifold pressure gauge. Takeoff power is about 90 inches of manifold pressure, a function of the diesel’s turbocharger. Climb is similar to a standard Skylane at sea level, but the diesel airplane gradually pulls away from the avgas model as the ground falls away.

The SMA’s ECU automatically controls rpm and mixture, so the only adjustment necessary for cruise is a reduction of manifold pressure, and that’s where the diesel’s advantage becomes most obvious. The near-universal availability of jet fuel is one benefit of the diesel engine, but another is a specific fuel consumption (sfc) that’s only about two-thirds that of the best piston mills.

Using the Skylane’s O-470U as the logical example, sfc works out to about 0.48 pounds per horsepower per hour at full power or 0.44 pounds at 65%. Converted to diesel power, the same airplane scores around 0.35 pounds per horsepower per hour at all power settings. In more familiar terms, that means the SMA Skylane will cruise along at 65% on about 7 gph, whereas the stock airplane will burn 11 gph. The drag profiles of the modified and stock airplanes are similar, so with 88 gallons in the tanks, the Diesel Skylane scores a kidney-stretching 11-hour range plus reserve, compared to only four hours in the stock airplane. At max cruise, that works out to more than a thousand miles.

Cruise numbers between the two engine types are similar at lower altitudes, but the SMA-powered airplane’s turbo diesel really begins to shine at high altitudes, where the turbocharger begins to pay for itself. At 10,000 feet, the standard and diesel airplanes are fairly neck-and-neck at 138 knots, but up at 12,500 feet, the diesel manages 140 knots compared to only 124 knots in a standard Skylane. The 12,500-foot altitude is currently the limit on the SMA Diesel Skylane, but the company is hoping to receive approval to step up to a max altitude of 18,000 feet in the near future.

While the vast majority of the numbers for the SMA Diesel are in the positive column, the standard piston airplane does retain several payload advantages. Diesel engines dispense with such extravagances as carburetors, spark plugs and magnetos, but they nevertheless wind up slightly heavier than standard avgas engines. Comparing the four-cylinder, SMA SR305-230 to the stock, six-cylinder Continental O-470U, the diesel installation winds up about 65 pounds heavier.

Additional fuel weight also reduces the diesel’s payload. Diesel engines were theoretically developed to burn diesel fuel (big surprise), but most SMA or Thielert-powered airplanes will probably never do so, which, as it turns out, is just as well. Diesel fuel is fairly dense (7.2 pounds per gallon), not a problem for an 18-wheeler cruising the interstate, but a definite concern for weight-sensitive airplanes.

Eighty-eight gallons of diesel weighs in at 634 pounds versus 528 pounds for 88 gallons of avgas. Considering that diesel is almost never available at airports, aircraft fitted with diesel engines obviously will use Jet A practically all the time, though even that has a slight weight disadvantage (at 6.7 pounds per gallon, 88 gallons of Jet A weighs 590 pounds). If jet fuel isn’t available, a diesel engine can burn avgas, though the opposite isn’t the case.

In other words, the total weight penalty in a Skylane converted to use jet fuel is about 127 pounds. Fortunately, the Skylane hardly notices the difference, and performance benefits more than offset the reduction in payload.

It’s important to note that because the SMA Skylane burns so little fuel, partial fueling may become the rule rather than the exception. No need to tanker a full 88 gallons around all the time. Remember, even a relatively long, five-hour leg will require only half tanks, so there’s little reason to operate with a full 590 pounds of fuel aboard on every takeoff. Fly with only 50 gallons in the tanks and you can increase payload by a considerable 255 pounds.

In-flight handling of the 182 doesn’t change a whit, though just as with a jet, everything becomes notably smoother. You’re still flying a Cessna 182, even if it’s a Skylane with a very different personality. Stall remains down in the mid-40-knot range, and the airplane handles with all the wonderful flight characteristics we’ve come to know and love.

Diesels are coming. There’s no question that you’ll be seeing more diesel powerplants in general-aviation airplanes within a few years. You don’t have to be a long-haul trucker wheeling down Interstate 15 in your Peterbilt or Freightliner to appreciate the benefits.

Besides, now you’ll have the advantage of telling your friends you’re flying a jet—sort of.

For additional information on SMA, visit their website at www.smaengines.com.