Sign up for our newsletter for the latest news and notes from EAA AirVenture Oshkosh 2018! 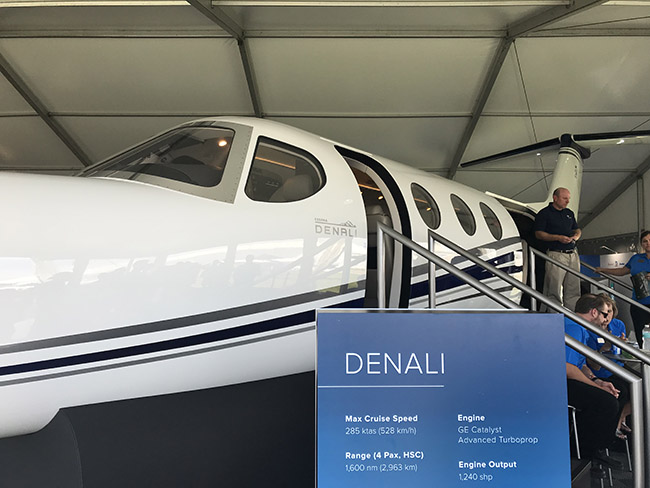 Textron Aviation brought its Cessna Denali cabin mockup to Oshkosh for the first time. The plane is a big single-engine turboprop model that will compete directly with the Pilatus PC-12, and it was clearly designed, at least by looking at the cabin, to do just that and to do it well.

I was lucky enough to get a tour of the new Denali mockup from the leadership team from both Textron and GE, including Textron Aviation’s Denali project head and SVP Rob Scholl and Brad Mottier, General Manager and VP at GE,  to name just two of the nine people at the meeting, and guess where we met? You got it The cabin of the Denali. During my too-short meetup with them, a lot of my best guesses about the progress of the clean sheet plane were confirmed. But first, the interior.

The Denali’s cabin is huge, and it features a large cargo loading door on the pilot side of the rear fuselage, like its competitor, but a little larger than that of the PC-12. The design of the Denali interior one-ups Pilatus in several other regards. as well. And the PC-12 is a great airplane. Textron says that the windows are 35 percent larger than those “typically found in this class,” they said, which I take to mean, “on the PC-12,” and it sure feels that way. The cabin of the Denali is big and light-filled. It has a larger cross section, with great shoulder and headroom. The interior styling is modern and clean, resembling more a light jet than a turboprop single. The lighting, all LED, is indirect, and the leg room and aisle room are both light or mid-sized jet roomy. Probably mid-sized, as the Denali has a flat floor.

These details are, of course, just having to do with the interior. The rest of the story—the GE Catalyst engine with FADEC control is a huge deal, and the avionics, the Garmin G3000 Touch controlled suite, is the same as found on a number of Cessna Citations. With the mockup lacking wings and several other key systems, we couldn’t go flying today, but I did have the chance to discuss the engine, the economics and the marketplace (considerable) for this game changing plane. I cannot wait to fly it. Which will hopefully happen sometime next year.

The cost will be competitive with the PC-12, too. One downside: you can’t get a Denali until some time in 2020. And if you’re interested, better get in line soon. They’re selling fast.