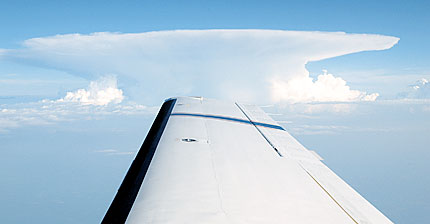 The trip was to be a long one: Watsonville, Calif., to Cedar Rapids, Iowa. It was supposed to take about eight hours, but the weather conspired to lengthen the trip to almost 10 hours. We planned to make one stop in Denver for refueling. It was typical western summer weather, which meant expectations of thunderstorms from midday on, so the Rockies were going to be problematic from a weather standpoint. As it turned out, so was much of the remainder of the trip.

The Piper Malibu’s avionics were ’80s vintage Silver Crown, and the most modern navigation device was a King KNS80 rho-theta navigator. To augment navigation, we included the obligatory handheld GPS, a Garmin 396.

This article isn’t really about that trip. Nor is it about the GPSMAP 396. The 396 is a powerful handheld and, as such, does all of the expected GPS navigating well. But the value it added on this trip had nothing to do with the GPS—instead, it had everything to do with managing the weather and routing available data through the 396 or any of the other systems providing XM Weather information.

Starting The Day Right
Preliminary weather information was obtained from The Weather Channel, followed by a detailed briefing from the FSS. The forecast was for clear sailing until we reached the Denver area where there was a probability of scattered thunderstorms. The forecast was initially correct; the Sierra mountain range was severe clear, and the view was beautiful. It remained that way until the Rockies were about a hundred miles ahead. We weren’t able to actually see them because towering cumulus clouds completely covered the mountains. Knowing there was undoubtedly strong turbulence and possibly embedded cells, we looked to the weather display and threaded through the pervasive green and occasional yellow and red displays to a visual approach at Denver’s Centennial airport.

Life Gets Serious
We were safely nestled on the lee side of the Rockies, but the weather around Denver was worsening as we prepared for departure. The FSS briefing told us the bad news: expect numerous thunderstorms and a front across our path not too far from our destination.

As we pre-flighted, there were dark clouds to the north, west and south, and a shelf of darkening clouds filled the western half of the sky. That begged closer attention, so we fired up the 396 and took a good look at the local weather. There were indications of rain in most directions, some fairly intense, but our planned departure route looked reasonable.

The actual departure routing we received and the subsequent request for deviation took us between two dark clouds, both with multiple lightning flashes visible, making our departure an interesting experience in threading the needle. Intently aware of the weather ahead, we began to focus on the weather information that XM Weather provided. Zooming out, the display range allowed us to see the full route to our destination. The front that the FSS had promised was visible, and it crossed our route a hundred or so miles west of our destination. Worse, there were many areas of heavy weather along our route as well.

The word of the day for almost everyone flying was deviation. The XM Weather NEXRAD display uses colors to show a range of rainfall severity. Green means light to medium rainfall. Shades of yellow to shades of red indicate increasingly heavier rainfall. The trick is to treat the colored areas like a traffic signal. Go on green, but be careful with dark green and yellow, and stop (divert) if the sky is red.

NEXRAD radar isn’t affected like the attenuation of on-board radar, so while our on-board radar had a very limited range through heavy precipitation, the NEXRAD weather displayed as far ahead as we wanted to look. But NEXRAD has one interesting weakness. The weather can be a few minutes old by the time it’s displayed. There have been comments that NEXRAD should be used for strategic planning purposes and not for tactical weather evasion—certainly a valid consideration.

But there are three things to keep in mind. First of all, there’s a time stamp at the bottom left of the screen that indicates the elapsed time since the National Weather Service provided the information. Obviously, the more current the weather, the more useful the display is. Secondly, you want to avoid anything that even begins to look like it’s going to become serious. The displayed weather will help you do that. Looking at the forecast winds, as well as at cell displays that show the direction of travel, you can make informed decisions regarding which side of a buildup to go around. And lastly, think upwind. NEXRAD provides close-to-real-time weather that’s a much more powerful tool than just airborne radar.

The FSS forecast was for the weather at our destination to be acceptable for a visual arrival. About the time we would normally consider calling Flight Watch, we checked the “Forecast” screen to monitor the current conditions. We also periodically checked the METAR at our destination to get an early indication of trouble. We simply had to zoom out on the map, move the pointer over a little colored triangular flag beside the destination airport, and a box appeared with the normal-coded METAR. Press “Enter” to see the English-language version. Using a range of colors—blue, green, yellow and red—to indicate a range of VMC through IMC, the little METAR flags themselves can also provide very useful visual indications of the local weather. During the flight, it was easy to keep an eye on the flag color at all the nearby airports so we had some indication of the local weather on the ground.

(An aside: In an emergency, a GPS’s “Find Nearest” feature may not provide enough information to choose the best airport. You would also want an idea of the airport weather conditions so that, given a choice, you could go toward the best weather. In questionable weather, this small but visible flag’s various color indications offer great help with an expedited landing. Since the displayed METAR is the same information available through the FSS or DUAT, it begins with a date and time in UTC. Check the time to make sure you aren’t looking at weather that’s too old to be useful.)

Soon after departure, we discovered that our groundspeed was much slower than expected. When we looked at the “XM Wind” display, the reason was obvious. What was forecast to be a tailwind was actually a headwind. The weather display showed a number of highs and lows along the route that were contributing to the unexpected headwinds. We decided to use the wind circulations around highs and lows, along with the regional prevailing winds, to plan deviations.

When we were level at FL210, there were tops higher than we were. Some were much higher. The “Echo Tops” display shows any weather that’s higher than your current altitude. The theory is that the higher the weather, the worse it is. So avoid the highest stuff. The display indicated that a climb might help, so we requested FL240. Eventually, even that wasn’t high enough, so once again, we used a combination of visual and NEXRAD images to avoid the more serious weather.

Throughout the flight, ATC periodically announced AIRMETs and SIGMETs for all of the surrounding states. Some were for our area. Both AIRMETs and SIGMETs can be shown on the map screen. A look at the weather display showed that a couple of the SIGMETs were along our route. Since they were moving south to southeasterly, we chose to offset slightly to the north.

Later, there was one particularly beautiful set of clouds off to our right, but the weather display belied its beauty. (Actually, its huge mushroom shape looked more like the result of an explosion of a large thermonuclear device.) The display showed that embedded within this white puffiness were five cells and many lightning flashes. It was like having a Stormscope! With each discharge displayed for seven minutes, it was obvious that this was truly an area to be avoided. The actual cells are indicated by a red icon. To help avoid them, each cell has an arrow that shows the estimated position of the cell in 15 minutes. If you move the pointer over the cell, it will provide both the height of the top of the cumulus as well as the radar reflectivity in dBZ.

Planning for our arrival at the destination, we used the “Satellite Mosaic” cloud display to help determine when we could expect to get past the clouds. It wasn’t as accurate as we expected. As we flew on, we found a significant number of clouds that weren’t shown, but using it and checking the METARS at selected airports ahead allowed us to know approximately when we would expect to clear the clouds and also that we could expect clear weather for the approach.

We knew that the weather system was approaching our destination. If the lower-level weather between us and the destination had been risky, we could have used the information learned from the Satellite Mosaic to determine how far east we might request to fly before we turned around and approached the destination in better weather.

We continued to periodically zoom in on the arrival end of the route and watched the front move slowly across and away from our route. We also continued to check the METARs at Cedar Rapids on the off chance that deteriorating weather might require preparation for an approach or, worst case, a diversion. We crossed the stationary front, and the actual weather was consistent, but the display showed that there was no untoward weather that would require another deviation.

As we neared our destination, it was obvious that the descent would be IMC. A quick look at the “Icing Level” screen provided an idea of how much exposure we might have to ice accumulation. There was, in fact, ice accumulation. But we were through it quickly and into warmer air.

One of the nice-to-have features allows all types of TFRs to be displayed. If they’re yellow, that means they aren’t active (but I wouldn’t trust that enough to blithely fly through one), and red means active. That feature is useful during VFR flights, especially around larger metropolitan areas (and President Bush’s home in Crawford, Texas).

Go/No-Go
After landing, we looked westward toward the dark clouds that would shortly become a thunderstorm. Sure, our trip would have been possible without the XM Weather information, but it would have been more dangerous, and we probably would have diverted to another airport before completing the flight in more benign weather. There’s no doubt that XM Weather makes weather flying safer. You can bet that IFR pilots who fly serious weather will soon look at the availability of XM Weather information as a go/no-go item.