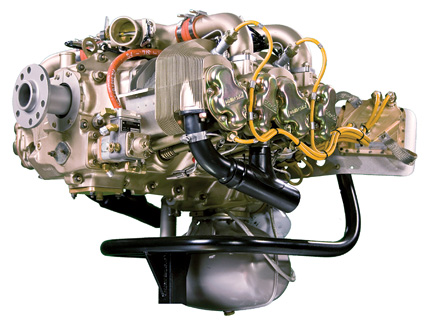 Face it. Computers are taking over the world. Like it or not, more and more of those functions we used to perform manually are being accomplished faster and more efficiently with electronic assistance. Perhaps surprisingly, aircraft manufacturers weren’t the first to embrace computer technology. The Pratt & Whitney F100 engine in the McDonnell Douglas F15 Eagle fighter was one of the first to feature a digital electronic control system to help the pilot manage power. Private piston and jet aircraft engines are only now being re-engineered to accept computer control, and the new system is known as FADEC (Full Authority Digital Engine Control).

As the name implies, FADEC entrusts full authority of all engine operating parameters to a computer. The system effectively replaces both magnetos, eliminating mag maintenance and timing. By definition, it can be installed only on a fuel-injected engine, thereby eliminating carburetors and carburetor heat. Additionally, mixture and prop controls disappear, and engine priming is controlled based on temperature and pressure. Because FADEC maintains the fuel/air ratio on each individual cylinder within narrow tolerances, it bypasses the most common cause of engine failure: mismanagement of the mixture control.

Teledyne Continental Motors (TCM) has been a major pioneer of FADEC technology, and the TCM system brings a level of simplicity to the cockpit that many pilots have never experienced. The mixture and prop controls go away, and the engine is managed by an electronic control unit (ECU). The pilot commands power with a single lever, similar to most turbine engines. TCM’s FADEC system is one of the first to be brought to a modern production aircraft.

TCM has designed and adapted a FADEC for engines from the bottom to the top of the company’s piston product line, the IO-240, IO-360 and IO-550 powerplants. (The recently introduced Cessna Skycatcher’s O-200D is excluded because it’s carbureted.) The computerized system controls every engine parameter to optimize performance and efficiency.

The TCM FADEC system on Liberty XL2’s IOF-240 monitors air density, the CHT and EGT of each cylinder, and the temperature and pressure of intake air; it also controls engine timing, analyzing data from the engine with a refresh rate as high as 70 times a second. FADEC then distributes a precise amount of fuel to each cylinder independently. If one cylinder begins running hot, then FADEC directs more fuel to that cylinder rather than flooding the entire engine with additional cooling fuel. 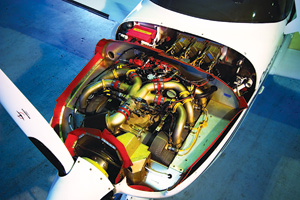 Spark advance also is tightly controlled, making hot starts and flooded starts a thing of the past. Additionally, the spark is automatically adjusted for every phase of flight, from full-power climb to mid-power cruise to descent. TCM estimates fuel savings on the order of 12% to 15% with FADEC installed, in contrast to current continuous-flow-fuel-injection and magneto-controlled engines. At any power setting above 65%, the FADEC system automatically adjusts mixture to best power setting. When the pilot commands a power setting below 65%, the system can operate the engine at 50 degrees lean of peak for optimum efficiency.
Advertisement

Because the system is all electric, TCM’s FADEC includes an independent backup battery to keep the electrons flowing in the event of a total aircraft electrical failure.

While it won’t be impossible to abuse a FADEC-managed engine, it will be more difficult, since there’s no longer a mixture or prop control to mismanage. The pilot will simply have the option of pushing forward to go (at the cost of higher fuel burn) and pulling back to slow.

FADEC will store all parameters of engine control and allow later diagnosis of any engine problem. From Continental’s point of view, warranty claims on FADEC-equipped engines should be easier to settle, as the company will be able to analyze a record of recent operation and pinpoint the cause of any problems.

In addition to better engine efficiency and its improved long-term health monitoring and diagnostics, FADEC offers a high level of automatic engine protection against out-of-normal operation. For that reason, it’s safer, especially with a dual-channel FADEC installation that provides redundancy against a failure. It minimizes component problems such as starter and alternator failure as a result of starting problems.

Continental is currently experimenting with a number of FADEC applications for a variety of general aviation models, hoping to earn STCs for aftermarket sales. Continental FADEC engines have been installed in a Cessna 172 and 210, a Beech Baron and a Diamond Eclipse. The company also is working toward OEM certification for installation as original equipment in a number of production aircraft. Continental estimates the cost for retrofitting a FADEC system will be between $2,500 and $7,500, depending on engine and aircraft type.

FADEC has the potential of bringing a whole new perspective to piston-engine flying. It’s hard to imagine: No more hot-start concerns, no more worrying about detonation, and perhaps most important, no more arguments about running lean of peak.