When I was a kid, a few years back, I always considered myself lucky to be growing up a government brat. My father was an inspector with the Department of Justice, and we moved around quite a bit. (Standard joke in the family: “My dad has been in and out of jail for 30 years.”)

Our most exciting move was to Anchorage, Alaska, when I was 12, and that’s where I discovered airplanes and Siberian Huskies, more or less simultaneously. It seemed Huskies, Alaskan Malamutes and other Arctic variations thereof were practically everywhere in Anchorage, and I’m convinced they’re almost universally the happiest creatures on the planet.

Dogs laugh with their tails, and that’s especially true of Huskies. They don’t wag their curved, bushy tails so much as they rotate them, creating a vortex of extra thrust on the trail. They wave their broad brushes almost continuously when they’re racing in the snow. Huskies love to run and cavort in the white of winter, and most of them are in their element when they’re harnessed to a sled. 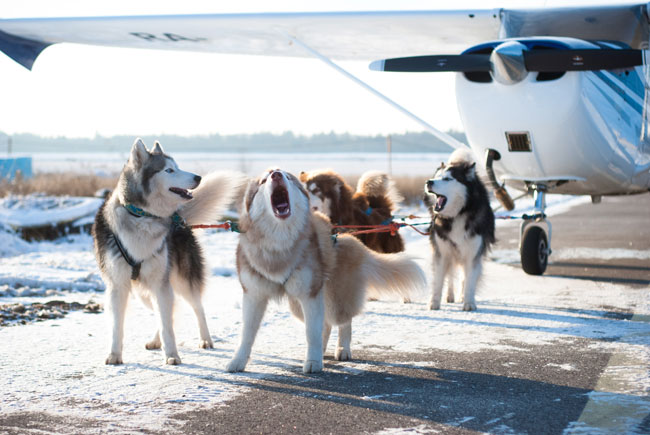 A Husky seemed a logical pet in Alaska, but Dad bought a Sheepdog instead. I always wanted a Husky or a Malamute. (I’m now living with my fourth Arctic breed, a solid white Husky named Kenai, who talks a lot. He doesn’t bark. He edits everything I write with soft yodels of approval or howls of dissent.)

About the same age, I learned that “little” airplanes were profuse in America’s northern territory. In fact, I took my first airplane ride in a Super Cub on skis. Alaska is well over half a million square miles of tundra, mountains, glaciers, lakes and rivers, roughly a sixth the size of the other 49 states combined and more than twice the size of Texas. For better or worse, the topography of the far north is so dynamic that there isn’t much of a highway network, about on par with that of tiny Vermont (only two percent the size of Alaska).

Not much has changed if you try to get around by car or truck in what is now the 50th state. Juneau, for example, Alaska’s capital city on the far southeast panhandle, is totally isolated by mountains, glaciers and the Pacific Ocean. There are no roads in or out. You either fly in, float in, hike in or parachute in. Float planes rule.

The population density in the state is so low (barely one inhabitant per square mile) that the Alaska Railroad makes frequent stops along its miniscule 500 miles of track to pick up passengers, one or two at a time.

Airplanes are mandatory in such a remote location, and accordingly, Alaska has more general aviation aircraft and pilots per capita than any other state. The largest seaplane base in the world is located at Lake Hood, just south of Anchorage. Collectively, Merrill Field and Anchorage International Airport have nearly 1,000 airplanes based locally.

In other words, Alaska is a great place to fly. Add it to your bucket list.

Each year since 1973, airplanes and dogs come together during the Fur Rendezvous, Anchorage’s answer to New Orleans’ Mardi Gras. The premier event is what promoters call the Toughest Race on Earth, the annual, 1,000 nm Iditarod Trail Sled Dog Race from Fourth Avenue in downtown Anchorage to Nome, Alaska, located on the northwest coast of the state, nearly to the Arctic Circle.

The race commemorates the 1927 delivery of anti-toxin serum to stop an outbreak of diphtheria. The winter of 1927 was especially cold and bitter, leaving Nome isolated and nearly inaccessible. The Bering Sea was frozen solid, so delivering the serum by sea wasn’t possible. The aircraft of the day were all open cockpit, and wind chill would probably have been an incomprehensible -100°F, again, inconceivable. The only viable option was to race northwest over land by dog team. (Snowmobiles were still 40 years in the future.)

It was still deep winter in much of central Alaska, and that was, perhaps counterintuitively, a good thing. The Yukon River, a major pathway toward Nome, was under snow and frozen solid. For six months of the year, the Iditarod trail is a near-impassable quagmire of muskeg (tundra and melt water above permafrost), unusable by dogsleds.

Twenty mushers and 150 dogs relayed the serum over five days, fighting near-white-out blizzard conditions and dangerously cold temperatures. Collectively, the mushers and their dogs saved the town of Nome and its outlying villages from an epidemic. Balto, the lead dog on the final leg of the relay into Nome, is honored with a bronze statue in Central Park, New York City.

Today, of course, getting to Nome isn’t the challenge it was 90 years ago. Alaska Airlines operates 737s on a regular schedule, and bush pilots use Nome as a popular base for traveling around the western portion of the state.

Airplanes are involved in practically every aspect of life in Alaska, and that includes the Iditarod race. A fleet of ski-equipped aircraft is stationed along many of the 39 checkpoints of the Iditarod to provide logistic and veterinary support to the contestants and their dogs, plus keep watch over the race in case of emergencies. Veterinarians are stationed at every checkpoint, and others are on call at vet hospitals near the route. Mushers are required to make a total of three rest stops, two for eight hours each and one for 24 hours.

Support aircraft range from DeHavilland Beavers and Twin Otters to the inevitable workaholic Super Cubs, Cessna 180s/185s, Maules and Aviat Huskies. Perhaps surprisingly, even a 100-pound Husky or Malamute can be partially anesthetized, loaded aboard a Cub or Beaver, and flown out to a veterinary hospital.

Competitors pay a $3,000 fee to enter the race and must qualify by participating in several of Alaska’s other sled dog races before they’re cleared to enter the Iditarod. First prize is around $50,000, and the remainder of the field splits another $300,000.

Virtually all mushers now carry satellite phones, and since checkpoints are usually no more than 50 miles apart, rescue aircraft are less than an hour away if a dog tears a cruciate or meniscus and needs transport to a hospital directly from the bush.

Veterinarians also caution mushers not to run the dogs too hard so that they breathe in supercooled air, frozen to -30°F or less. Frosted lungs can kill a dog or a human. (When I attended the University of Alaska, we were warned not to indulge in any vigorous exercise outside when the temperature subceeded -30°F.)

Similarly, a typical sled dog can burn as much as 10,000 calories per day, so a musher needs to stay ahead of their energy requirements by feeding them regularly on the trail or at the rest stop.

Downtown Anchorage was always the starting line of the race. Early every March, we looked forward to the jubilant, wolf-like howls of perhaps 700 Huskies, strapped into their harnesses, wearing their leather snow booties and eager to test themselves against the elements. They can be heard everywhere in town, and those of us with a penchant for the poetic always characterize their howls as the voice of Alaska.

In a warming climate, a lack of snowfall on some southern portions of the trail have sometimes necessitated trucking snow to Anchorage from the nearby mountains to avoid disappointing thousands of Fur Rendezvous fans who fly in from the southern 49 states and many foreign countries. For that reason, the ceremonial starting line of the official race is in Anchorage, but the actual start may be moved several hundred miles north to a location such as Fairbanks.

A typical field of racers consists of at least 25 mushers and 400 dogs who will happily run themselves to exhaustion for their owners. Each racer drives 16 dogs, five of which must finish the race in order to qualify for prize money. Sled dogs enjoy nothing better than pulling on a harness, and the Iditarod Trail Sled Dog Race provides living proof of their boundless enthusiasm.

In 2018, I hope to jet to Alaska, hop a ride on one of the support airplanes and cover the race from the high station.

If anyone demands proof that there is a god, they need to look no further than a dog.