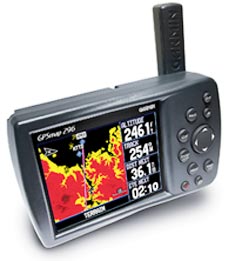 I count myself lucky that I’m allowed to fly with virtually all the new portable GPSs, and I’m just as amazed as you are when avionics manufacturers continue to find new worlds to conquer. Just when it seems there’s nothing new left to be done, someone does it. Garmin, manufacturers of aviation GPS technology, recently pulled its latest portable rabbit out of the hat at the Aircraft Electronics Association (AEA) Convention in Las Vegas. It’s designated the GPSmap 296, mounted on the 196 chassis, and predictably, it incorporates all the talents of the GPSIII, 196 and the 295 plus a plethora of new tricks. The unit is readily adaptable to aviation, automotive and marine modes with a minimum of effort.

A few days after the AEA show, my wife and I flew a Bonanza 2,000 miles from Southern California to Lakeland, Fla., in conjunction with the annual Sun ’n Fun Air Show. We used the new 296 during the flight. I deliberately avoided reading the manual to test the system’s simplicity (and to satisfy my natural aversion to taking direction), and I was once again amazed at how intuitive Garmin has made most functions.

Certainly, the most outstanding feature of the 296 is its terrain alerting function. Altitude is life, and there’s no record of anyone being hurt colliding with the sky, but the ground is less forgiving. Bruce Landsburg of the AOPA Air Safety Foundation reports that a significant portion of aviation accidents occur as a result of controlled flight into terrain (or CFIT), aviation speak for a pilot flying a perfectly good airplane into the ground, presumably because he didn’t know it was there.

The 296 gives you the option of knowing what terrain is ahead of you. In fact, you can even run the cursor to any point on the screen and see the elevation of that point. The system is WAAS-enabled, offering accurate vertical and horizontal positions. Garmin’s new GPS provides pilots with a comparatively low-cost hedge, a kind of poor-man’s terrain awareness system. (In contrast, a typical, approved, panel-mounted TAWS system sells for more than $20,000.)

Garmin’s 296 is, after all, a portable unit, not approved as a primary nav source for VFR or IFR, so there’s no sophisticated female British-accented voice to intone an insistent “Terrain, Terrain” when the computer decides you’re too low. Still, the visual warning display could hardly be more graphic.

The full-page display shows red terrain ahead (zero to 100 feet clearance), and if you fly too close to higher ground, a separate terrain-alert square pops up at the lower left screen to emphasize the danger. Proximity alerts are pilot selectable at 60, 90 and 120 seconds. Increase your altitude as you approach the obstacles, and the terrain gradually changes color from red to yellow (500 to 1,000 feet clearance) when you climb slightly above it, and finally to black when you’re well clear of the obstacle.

Such capability demands an awesome terrain database, and that describes the one included in the 296. Garmin aviation marketing manager Tim Casey said that the new geographical database now includes something like 30 million data points, roughly one for every 30 arc seconds of lat/long. That represents one data point each for 30 million geographic boxes roughly a half-mile on a side all over the U.S.

The 296, however, doesn’t have any trouble keeping up with all that data. At 200 mHz, the Garmin 296’s processor speed is almost triple that of the 196 introduced two years ago at the EAA AirVenture, so the new unit redraws map terrain at a much faster rate. (In fact, Garmin’s in-house database includes data points down to one arc second, but the processor necessary to draw a map to such tolerances in real time—
one every 100 feet—would have to be awesome.)

The pseudo instrument page is similar to the one on the 196, and it’s just as capable, but the tripled processor speed won’t have much effect on instrument readouts. The horizontal- and vertical-position refresh rate is limited by the frequency of GPS updates, one per second. Garmin incorporates the information seamlessly, so the needles move smoothly, but it’s important to remember there is a slight delay from control input to instrument indication.

Also, keep in mind that what looks like an artificial horizon at lower left isn’t intended as a replacement in case your attitude indicator develops a bad attitude. The instrument is a pseudo rate-of-turn indicator with no pitch information. The pseudo panel page offers instruments more as individual backups rather than for full-panel replacement. In the unlikely event that you lose altimeter, airspeed, VSI, HSI and turn coordinator plus all nav information at the same time, the 296 could theoretically serve as a backup, but only with very gentle inputs and in soft IFR.

The HSI Arc mode very well may be the most popular of the GPSmap 296’s electronic pages. It’s strictly a look-forward view that ignores everything behind you, but it still includes the key nav information in the corners. You can personalize the four corner readouts to your liking. Most pilots will opt for time and distance to waypoint plus speed and bearing, but there are a myriad of other options to suit your needs. Ranges are as you like them, selectable from a minuscule 20 feet to 800 nm.

Another improvement on the 296 is low power usage. A traditional complaint about portable GPSs since the early 1990s has been that battery life is sometimes very limited. The 296 features a rechargeable lithium-ion battery that’s alleged to run for 12 hours in ambient light, eight hours with backlighting activated. On airplanes fitted with a lighter outlet, you can use aircraft power to avoid draining the battery. That’s, by far, the best way to go, as you can select maximum backlighting without affecting battery life. Also, since the battery is rechargeable, you’ll be topping off the lithium-ion any time you’re using aircraft power. (Incidentally, don’t believe the readout of remaining battery time on the display. Timing the display suggested it was running down at about one minute for every 35 to 40 seconds of real time.)

As you might expect, the 296 offers a plethora of routes (up to 50 of them with as many as 300 waypoints each), user waypoints and a multitude of ways to display its information. There are even GPS overlays of approaches. Indeed, the system is so sophisticated, you could spend hours learning all its capabilities. Fortunately, you don’t have to unless you want to.
Advertisement

Garmin always has recognized the need to keep its products user-friendly, and the 296 lives up to that standard. Basic operation is almost silly simple, and anyone with a smattering of computer smarts or experience with other GPS units should catch on fast. Even if you’re not that familiar with a multi-function GPS, the Garmin GPSmap 296 is easy to operate, designed for everyone, from seasoned pros to the pilot whose last known position was number one for takeoff.

Despite all its features, the Garmin GPSmap 296 remains a compact package, about the size of two television remotes back to back. You can mount it to your airplane’s yoke or to a convenient beanbag if you plan to jump between airplanes (or cars or boats, for that matter). Either way, it’s tiny and talented. In the case of the 296, Garmin’s motto could very well be “Fly small. Smile big.”