I was glad my editor couldn’t see the little jig I danced after reading her e-mail asking if I was interested in flying a new taildragger from Luscombe called the Phantom II. Any pilot in love with tailwheel aircraft need only see the words “fly” and “Luscombe” before his or her salivary glands start working overtime. I typed “yes!” so fast that it looked like “yeti” and I was sure she’d think I had lost my mind.

For the uninitiated, Luscombe is an airplane manufacturer that has a storied past. Don Luscombe founded the company in 1933, following his success designing the Monocoupe series of general aviation aircraft. He didn’t like the idea of constructing airplanes using tube and fabric, so he made the prescient decision to build his airplanes using an all-metal, stressed-skin design. 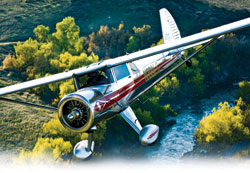 The first Luscombe airplane was the Model 1, more commonly known as the Phantom. The airplane wasn’t a big financial success, so, in 1936, Don and his team followed it up with the Model 4, essentially an improved Phantom that kept the 90 hp Warner radial engine and all-metal construction (except for fabric wings). By 1938, Luscombe had created the now-famous Model 8, which sported a horizontally opposed engine—a new idea in the late ’30s. It became the most popular Luscombe ever built. In 1950, Luscombe Aircraft folded due to financial problems. The tooling and licensing rights changed hands several times, and the Model 8 continues to be built today. Sadly, the Model 4—with its rounded cowling and classy art-deco styling—faded into obscurity.

That is, until the flashing little e-mail icon beckoned me to a place where the ghosts of airframes past have led a path to the present. I was to meet John Dearden, president of the “new” Luscombe-Silvaire Aircraft Company (www.luscombe-silvaire.com), at historic Flabob Airport in Riverside, Calif. Dearden and his small team of dedicated artisans are building new Luscombe aircraft using the original designs. Though the type certificate has been plagued by legal issues, Dearden and his group are currently offering handcrafted originals from their small facility.

Flabob is one of America’s oldest airfields (1925) and it’s an appropriate place to be re-creating the classy and timeless Luscombes. The airport—whose name comes from a contraction of the two first names of Flavio Madariaga and Bob Bogen, who purchased the airfield in 1945—is itself like stepping back in time.

Inside round-roofed wooden hangars, you can catch glimpses of Globe Swifts, Stinsons, Zlins and biplanes of every feather. Desert palms poke up into the always-blue sky as dry winds help preserve airframes that reach back seven decades. In the northeast corner of the field stands a hangar where I catch the glint of something very special.

Dearden’s team has rolled out the Phantom II onto the ramp. The airplane’s highly polished aluminum skin refracts the late-afternoon sun exactly like a solar mirror. I put my hand up to my forehead just so I can look at it. Though I don’t see pillars of light or hear angels singing the “Hallelujah Chorus,” the effect is the same: I’m staring at a heavenly ghost. Like a hazy mirage, the Phantom II comes into full view, and I have to catch my breath.

Dearden assures me that this is no ghost. In fact, the Phantom II is brand-new. I can smell the fresh leather through the open cockpit door as I shake my head. By now, several members of his team have come out to offer information about the craft. I suspect they’re also keeping me from getting fingerprints on the fuselage. I know this because the airplane’s handlers wear white cotton gloves. I can only imagine the time spent polishing this bird. 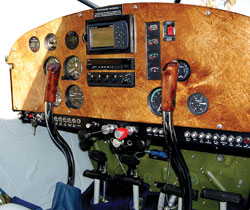 “This is a totally new airframe,” says Dearden. “It’s the standard Model 8 wings, fuselage and tail, but with a custom-built fuselage.” I did notice this Phantom II isn’t an exact replica of the Model 4, and not exactly like the original poor-selling Phantom from 1933 either. It seems, instead, like a combination of the best of each. I wondered about the genesis of such a project.

“We originally built it to order for an individual customer,” related Dearden. “Then we decided to market it.” The Phantom II retains the all-metal, monocoque design of the original Luscombes. It’s a construction technique that supports structural loads by using the airplane’s external skin instead of an internal frame covered with a non-load-bearing skin such as fabric.

Easily the most prominent feature of the Phantom II is the glorious radial engine adorning the nose. The smooth aluminum cowling and the unmistakable seven cylinders under it announce that this isn’t just any LSA. The Australian-built Rotec R2800 radial makes the airplane look imposing and stout, but retains the ’30s-era lines. At 830 pounds empty and with a 1,320-pound takeoff weight, the Phantom II is certified as an LSA. It’s also one of the only LSA featuring a radial engine. Since the LSA market seems to be flourishing even in these tough economic times, the Phantom II, with its high cool factor, is a welcome newcomer.

I was ready to fly the Phantom II so I could find out whether or not this airplane’s beauty was only skin-deep. Luscombes have a reputation for being a pilot’s airplane and fun to fly. I wanted to see if the Luscombe mystique had survived the 70 years between then and now. It was like going back in a time machine; only I didn’t need 1.21 gigawatts of electricity to get there.

As I walked toward the cockpit, the curved fuselage surface gave me a carnival fun-house look as I slid into the left seat. There’s no yoke on the Phantom II, and both sticks have beautiful wood grips. The matching polished wood panel was an immediate throwback to another era, and it was as if I was inside a Staggerwing Beech or something with equal panache.

But as I looked around the cabin, I knew I was in a modern airplane. The Garmin 396 GPSMAP, along with Garmin radios and transponder, completed a basic but efficient panel. The nonadjustable, gray leather seats are ergonomically designed and offer great support. Above me, a single oval skylight gave the cockpit some much-needed light. 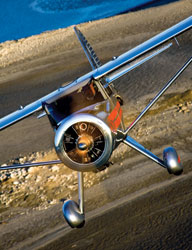 As in most tailwheel airplanes, visibility over the nose while taxiing is pretty nonexistent. The big rudder gives control authority without much speed, so ground handling is easy. A touch of throttle and some forward stick will whip the Phantom around pretty easily. The Cleveland hydraulic disc brakes were firm and responsive.
Advertisement

Part of the fun of flying a taildragger is the moment in the takeoff roll where you can raise the tail, and that seemed to happen quickly as we headed skyward. The cabin is a snug but comfortable 40 inches in width—half an inch wider than a Cessna 172’s cabin. The wooden Performance propeller gave the Phantom II a climb of about 850 fpm at 85 knots.

One thing I immediately noticed is that the Phantom didn’t feel at all like an LSA. In fact, it felt like a much larger airplane. Perhaps part of that is the muscle—and sound—imparted by the radial engine. The Phantom felt something like an 18-wheel truck roaring along an interstate.

Another trait I noticed is that the airframe felt strong. “This is basically a 10-G LSA,” says Dearden. “You could do aerobatics, it’s so strong.” Indeed while the control response is light, it’s also sure and positive. The airplane rides the bumps nicely and has benign stall characteristics. Dearden says cruise is 110 knots, and that seemed correct as we sashayed above Lake Mathews, 20 miles from Flabob.

I loved looking down over the curved wheel pants and at the wood panel; it was like visiting another era. Seeing that big radial up front just added to the illusion. An interesting thing about the Rotec radial engine is that it turns faster than traditional engines. At cruise, I looked down and was surprised to see the rpm in the 3,000 range. The Rotec has a TBO of 1,000 hours.

Heading back to the runway held no surprises. Luscombes have an undeserved reputation for being tough to land. The large tail surfaces give them a lot of control authority. The airplane’s characteristics mean you just have to be on your toes. Inputs must be light and quick, and you have to stay ahead of the airplane. It’s simply not meant for lazy pilots.

Back at the hangar, after everybody had gone, I decided to stay around a little. Night was coming on, and the sky was a deep violet punctuated by orange streaks from the setting sun. Walking toward the Luscombe’s hangar, I thought I heard an old tube radio warming up, filling the hangar with static and a warm amber glow. Wasn’t that President Franklin D. Roosevelt’s voice followed by strains of Bob Hope singing “Thanks for the Memories” from 1938? Couldn’t be. Something pulled my eyes upward, and I could swear I saw a pristine Luscombe Model 4, circling the Phantom and waggling its wings as if to say, “Now, it’s your turn.”