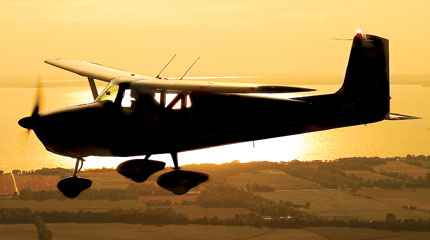 Can it really be almost 50 years since Cessna introduced the first C-172? In a word, yes. Next year, the Wichita, Kan., company will celebrate the 50th anniversary of the C-172’s introduction, and the rest, as no one should ever say again, is history.

Well, not quite. The Skyhawk is hardly history. It remains in production in 2005 as one of the best-selling airplanes in the world, a talented jack-of-many-trades. At least two generations of pilots have logged their share of hours in the type, and it continues to engender respect and even grudging admiration from family fliers, instructors and students, and even an occasional business operator.

Regardless of the airplane’s me-too qualities, the Skyhawk story is fairly amazing, an unbridled success by any measure, although not everyone agreed that tricycle gear was the wave of the future back in the early 1950s when it was initially proposed. The story goes that a group of Cessna engineers pitched the nosewheel idea to the company’s marketing department, and the engineers were told in no uncertain terms to forget it. Marketing apparently felt Cessna’s future lay in tailwheel airplanes.

As a result, the tenacious group of nosegear advocates established their own informal skunk works 50 miles west of Wichita in Cessna’s small hangar at Kingman, Kan., more than coincidentally, Clyde Cessna’s hometown. Working primarily on evenings and weekends, they conceived the first tricycle-geared Cessna.

They couldn’t possibly have imagined how successful their new airplane would be. At the peak of production in the late 1970s, Cessna was pushing a new Skyhawk off the end of the line at its Strother facility once every working hour. That’s 40 airplanes a week, 2,000 a year. In total, Cessna has built well over 35,000 model 172 Skyhawks and another 7,000 powered-up or retractable variants so far, despite the shutdown of all piston production from 1986 to 1997.

For some pilots, however, older will always be better. Tim and Liz Popp of Lawton, Mich., are Cessna owners who regard the originals as among the best of the type, at least for their purposes. The Popps have owned their first airplane, a 1958 Cessna 172, for nearly a decade, and they currently have no plans to replace it. They’ve completely restored the classic design to its original configuration, right down to paint, interior, decals and instruments. (Tim Popp has upgraded the radio package.)

The 1958 model was technically the third year for the type, but there were very few changes to the airplane in those three years. The first significant “improvement,” more aesthetic than functional, came in 1960 when Cessna adopted swept tails on all of its singles except the C-150 and C-180. The next came in 1962 when the company abandoned the fastback fuselage and mounted a relatively useless rear window on most models. As everyone must know by now, the first Cessna 172s were little more than C-170s with a nosewheel mounted under the cowl, repositioned main gear and modified rudder following behind, the latter loosely borrowed from the Cessna 180.

The tricycle gear was billed as “Land-O-Matic,” and the large flaps, holdovers from the C-170, were called “Para-Lift,” both features intended to endear the type to low-time pilots by making it easier to fly and land. Indeed, the C-172’s NACA 2412 airfoil and Continental O-300A engine made it perhaps the most docile airplanes in the sky until the advent of the Piper Cherokee. The C-172 was an instant success from the very beginning, selling some 1,100 units in the first year.

It also was among the simplest. The gear and prop were fixed, the engine was carbureted, and there was no fuel pump required, as avgas gravity-fed down from the high wing. In the 1950s, high-wing airplanes were the rule, and low-wing upstarts—such as the Bonanza, Navion, Mooneys and Comanches—were regarded more as high-priced aberrations that couldn’t readily be adapted to the entry-level market. Both Piper and Beech were later to embrace low-wing designs as trainers and personal transports, direct competition to the 172, but the Cessna Skyhawk would continue to lead the sales race well into the next century.

Tim Popp is probably typical of many pilots who regard the C-172 Skyhawk as one of the easiest flying airplanes in the sky. In the workaday world, Tim is an environmental manager for Pfizer Pharmaceutical, but his passion outside the office is aviation. Descend to the Popps’ basement and you’ll find an RV7 that has been under construction for two years, in addition to the family C-172 parked at the local airport. “I guess you’d say I’m an aviation nut,” says Tim. “Although I don’t make a living in the industry, I seem to spend much of my spare time involved in flying of one kind or another.”

The Popps and their golden retriever, Bailey, spend at least one day each weekend traveling the local Midwest. “We don’t do many long-distance flights,” says Tim, “but the airplane allows us to expand our horizons far beyond any convenient trip in a car. We have relatives in Traverse City, Mich., about four hours of travel by car, but only one-plus-40 in the airplane. Better still, the time in the airplane is pretty much the same all the time. Traveling by car, we can run into rush-hour traffic, extending the time by an hour or more. Our longest flight to date was to Gettysburg, Pa., six hours away. That’s a long cross-country for us.”

Flying with Tim in his classic Skyhawk was like turning back several pages, or chapters, in aviation history to a simpler time. (Okay, technically, the airplane isn’t the Skyhawk model with factory wheel fairings, full paint and gyros, but for the sake of simplicity, we regard all C-172s as Skyhawks.) In keeping with his penchant for the original configuration, Tim has left the instruments in their original positions, which means they’re scattered around pretty much at random rather than arranged in a basic T. Tim plans to earn his instrument rating in the C-172, so there may be some changes to instruments and radios in the near future.

Full fuel is 42 gallons usable, an easy four hours plus reserve at the max cruise burn rate of 8 gph. The Popps’ airplane is probably typical of many older C-172s in empty weight, and Tim reports the number is 1,362 pounds, so payload works out to 586 pounds. That’s three folks plus baggage, easily the equal of most other light singles. Coincidentally, that was exactly our load on our check flight.

The old-fashioned, spring-loaded, pull-type starter is mounted at the lower left, and the little Continental fires up happily. At only 2,200 pounds of maximum gross, early Skyhawks are lightweight machines, and even the hint of power will bring them off the chocks and start them rolling down the taxiway. This is a “light” airplane in every sense of the term, both on the ground and in the air, and you’ll definitely feel any irregularities in the taxiway. In a similar sense, significant winds can demand a brush-up in windy taxi technique.

The impression of “light weight” is only reinforced when it’s time to fly. Nothing happens too fast during the power-up, but with 174 square feet of wing to lift only 2,200 pounds and a clean stall down around 50 knots, it doesn’t have to. The airplane lofts skyward with ease, if not enthusiasm. Climb at gross isn’t worth bragging about, 550 to 600 fpm on a typical day, but you may see 700 fpm or more when flying light.

The airplane levitates with the stability of an elevator, and you can plan on reaching typical cruise heights of 6,000 to 7,000 feet in 15 to 20 minutes. Unless there’s another fuel crisis, there’s little reason not to leave the left knob full forward for 75% cruise, and Cessna claims that should deliver about 108 knots. That’s probably a little optimistic for most airplanes with wheels hanging in the wind, but 100 to 105 knots should be reasonable at high cruise. If you need to stretch the range to reach the next self-serve fuel pit, economy cruise at 55% power should deliver more like 90 knots on only 5.8 gph. That will increase endurance to six hours, worth probably 550 nm.

From this, it’s apparent speed isn’t the C-172’s trump card. By far, the Skyhawk’s best quality is its forgiving nature. The type’s flight characteristics are benign to a fault. It seems almost impossible to get the airplane mad at you. Stalls with those big flaps fully extended don’t happen until 45 knots, and if you have the ball anywhere near centered, the ’hawk will merely mush up and down before its gentle, straight-ahead break. Fly sloppy-footed with the ball significantly out of its cage, and the C-172 will drop a wing and might even spin if you fail to apply counter controls.

The obvious benefit of the Skyhawk’s easy flying characteristics comes in the pattern. With big flaps, a low stall speed and highly predictable handling, landings can be as you like them. Need to drop in to a super-short strip? No problem. Reduce the knots to 55, cushion the touchdown with a shot of power, and the C-172 can fit into 1,000 horizontal feet. Just remember that sneaking in is usually easier than launching back out.

A Skyhawk could even conceivably maintain 110 knots down the ILS to stay ahead of the Citation at the outer marker. Be cautious, however, about full-flap slips to decelerate, as they can blank airflow across the tail and seriously reduce elevator response.

Such ills don’t afflict the Popp airplane. “We operate our C-172 pretty conservatively,” says Tim Popp, “rarely leaving long, paved runways. For us, the airplane is strictly a kind of flying RV. It allows us the opportunity to get away from the Kalamazoo area [in Michigan] on weekends. It’s a wonderful escape machine.”

When I asked Tim and Liz Popp what they’d buy if they ever sold their Cessna 172, they said, “Why, another Skyhawk, of course.”

Check out the newest Skyhawk and other fantastic single-engine airplanes in our latest Piston Singles Buyer’s Guide.