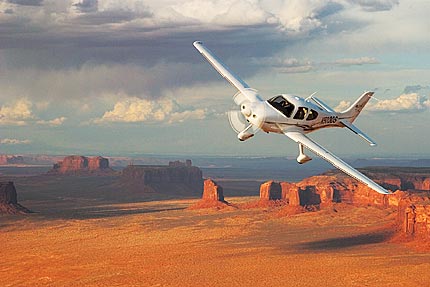 The Navajo Indians believe that everything has its own rhythm, its own beat, its own time to birth, to flourish, to change, to adapt. That’s how the land and its native people originated, they say. The story goes that the world began in darkness, but the people weren’t happy in that place. They gradually moved up through three more worlds before coming to where they are now, a sacred land known as the Monument Valley.

The area itself is a testament to the Navajos’ beliefs about change and evolution. The valley is a collection of towering buttes, spires and mesas carved out by time, winds and rain, near the four corners where Utah, Colo-rado, New Mexico and Arizona meet. It was here that we met the newest evolution of the Cirrus SR22, the -G2, banking over trails below that were scratched into the landscape by cowboys, Indians and settlers on horseback centuries ago. Looking at the new SR22-G2 in flight over the Monument Valley looked like an anachronism, out of place and time. But a closer view reveals that they have much in common: a story of evolution.

The Origins
For brothers Alan and Dale Klapmeier, founders of airplane manufacturer Cirrus Design Cor-poration, they found their own rhythm in aviation several years ago. The story goes that the evolution of the new Cirrus SR22-G2 began when they were mere infants. Their mother would take them to the Chicago O’Hare Airport where the sounds of jets and airplanes flying overhead would calm the two crying brothers to sleep.

Dale reminisces, “Our mom would say that she would take us to O’Hare because we would sit there quietly at the parking ramp, watching the airplanes take off and land. This would give her a couple of hours of quiet time reading a book while we watched airplanes.”

In the years that followed, the brothers’ fascination with aviation didn’t diminish. And just like the plateau that soon started to rise gently to form what is now called the Monument Valley, the seeds of Cirrus started to take form. Alan immediately found himself sketching airplane designs, while Dale, the younger of the two, built and played with them. It was a scene that would play an important role in their lives several years later.

“Alan is the big dreamer,” explains Dale. “I’m more the hands-on realist. I like to be down there and building the airplane, and he’s the one who’s drawing the pictures of what we should be building.”

He continues, “From the beginning, the goal was always building production airplanes. What we wanted to do was be the next Cessna, to have a manufacturing facility that’s building a whole line of airplanes and pumping them out at great rates. But the only way we could get started was in the kit industry. So here were two guys out of college who decided they had a better idea for aviation, a neat airplane that they could design, develop and build kits for. We had no money, maybe more ambition than sense.”

So in 1987, the Klapmeiers introduced their first airplane, the VK30, at the Oshkosh AirVenture Air Show. The five-seater was powered by a 300-hp Continental pusher engine and had a cruise speed of over 200 mph. But when people didn’t line up to buy it as they had hoped, the brothers decided to learn more about what people wanted from an airplane and refocus their attention to their original goal—to build certified production airplanes.

But in their quest to build their first production airplane, they soon realized that they shouldn’t be talking to pilots about what they want from an airplane. Instead, they turned to the non-aviator, a practice that they continue to hold to this day.

Dale explains, “When you try to sell an airplane to a pilot, it’s not that difficult because pilots love all aircraft. But behind every pilot, there’s somebody who has the veto power. So we decided to design the airplane for the person who’s not in the front left seat, even though that person is extremely important. How do you make sure everybody else is comfortable with the idea of that person flying in the front left seat? We started with the concept of the SR20 and we worked at it from every angle, from finding a better way to open the doors to safety considerations. It all came down to comfort, the complexity, the ease of operation and designing an airplane so that you don’t get sick in the backseat, it’s easy to operate, it’s got nice flying qualities, it’s easy to manage and it’s safe.”

And during the course of envisioning a new concept of aircraft that’s simpler for both pilots and non-pilots alike, Dale and Alan ended up masterminding a new cockpit technology that revolutionized the entire industry, the effects of which continue to reverberate throughout aviation, with every major aircraft manufacturer following suit. It was the birth of general aviation’s own all-glass panel, the primary flight display (PFD). In keeping with the Klapmeiers’ vision of simplicity, the new PFDs not only allowed for easier instrument reading and scanning, but the particular PFD they chose, the Avidyne FlightMax Entegra, also allowed pilots to be integrated into the aircraft system, giving them the freedom to choose the information they want, whenever and wherever they need it.

Dale emphasizes, “The PFD has certainly been a driving goal for us from the very beginning. We wanted to find solutions to make an airplane very intuitive to fly. So in the early 1990s, we talked to quite a number of avionics companies, asking them to make a bigger, horizontal screen for us. We worked closely with them to produce, first, the multi-function display, followed by the primary flight display that we were happy with, and when we introduced it in our airplane, we knew that it would change the face of aviation forever.”

And out of that philosophy, a whole line of Cirrus aircraft was born. In 1998, the company introduced the Cirrus SR20, which was the first of its kind that incorporated an all-composite construction with a flat-panel, multi-function display. Equally, the SR20 was the first certified aircraft to feature a built-in ballistic airframe parachute, called the Cirrus Airframe Parachute System (CAPS). In 2000, the Klapmeiers introduced their best-selling model thus far, the SR22, which combined the SR20’s easy handling, advanced avionics and CAPS safety, but with 110 more horsepower for much better performance. Now, it’s the new and improved SR22-G2, which is exactly what the Klapmeiers see as “evolution.”
Advertisement

According to Dale, “The reason we call it an evolution, not a revolution, is because these are very small changes to the customer. We didn’t totally redesign the airplane. What we did was we took the SR20 and the SR22 as they were and said, ‘What could we make better out here that affect the customer that they’re going to want?’”

The changes that produced the SR22-G2 are subtle, transforming the original SR22 airframe and design into a better version of itself. Although much of it stayed the same, including the all-glass panel and the standard avionics that were in the original, the enhancements provided enough difference that it improved the overall look and feel of the airplane.

Taking a cue from the automotive industry, the Klapmeiers designed the doors with a Secure Latch system that allows passengers and pilots to close the doors with a single movement. Just slam it and it’s closed.

“We grow up in a world of slamming the doors to close them, which isn’t the norm in airplanes, because they usually require closing the door, throwing a latch and pulling a lever,” explains Dale. “So why not design the airplane doors so they can simply be slammed shut?”

The Klapmeiers also took a hint from the auto industry’s interior design concept and found an auto interior supplier that’s using an extremely lightweight material for aircraft use. Perforated leather seats with French stitching and a leather-wrapped side-yoke, throttle lever and grab handles make the flying experience much more enjoyable and luxurious.

Other improvements include a new paint/color scheme, a six-point engine mount that offers a smoother ride, a Hartzell Scimitar Select propeller that provides better performance and efficiency because of its aerodynamically sword-shaped blades and a new cowling with improved airflow management and performance because of the reduced size of the exhaust contours.

Advertisement
Along with these design improvements, the manufacturing process that went into creating the SR22-G2 has allowed for an entirely new fuselage that resulted in an overall empty weight reduction, which increased the payload and useful load. Other manufacturing enhancements include a new two-piece lower cowling that simplifies the removal and installation for servicing, improved access to the hardware that connects the wing spar to the fuselage, convenient tail access for future options and improved CAPS access for routine inspections.

Overall, the new and improved package that became the SR22-G2 was a sight to behold, especially against the backdrop of the ever-evolving Monument Valley, where director John Ford shot classic Western films such as Stagecoach and She Wore a Yellow Ribbon. Three generations of full-blooded Navajos came to admire the second generation that Cirrus has to offer. Shannon Young, accompanied by her mother, Gloria, her daughter, Diamond, and her brother, Jason, were on their way into the township of Kayenta when they spotted the SR22-G2 at the airport and couldn’t resist taking a closer look at it.

“We get some airplanes that fly tourists in and out of here in order to see the Monument Valley,” claims Shannon. “But we haven’t seen anything quite like this on our airstrip.”

Avid aviation enthusiasts, Shannon and Jason quickly shuffled their way onto the cabin to see the latest in cockpit avionics. They were accompanied by five-year-old Diamond and Gloria, who were both mesmerized by the colorful screen of the Avidyne FlightMax Entegra glass panel.

“There are a lot of cool things in this. My gosh! Look at how they make them now!” exclaims Shannon with amazement.

They were soon joined by Wilma Toledo, a full-blooded Navajo herself, working next door at the Amigo Café, a restaurant that serves Indian fry bread and tacos to anyone who comes to visit. She adds, “It’s very cool. There’s a lot to understand about it that makes it cool.”

The Next Generation
And a lot more things are in store for the company and its airplanes, that is, according to Dale, who isn’t satisfied with sitting on his laurels. He and Alan are already planning their next adventure, the next step in their evolution process.

“We’re full of dreams,” says Dale with a twinkle in his eye. “Aside from switching our efforts to ramping up our service centers and making sure that we take care of our customers better than anyone else, we’re still focused on our ultimate goal—to have a full line of airplanes…. And someday, I hope to build small jets for the owner sitting in the front left seat. We’ve got a long road ahead, but we’ll get there. We’ll do it.”

In the meantime, the SR22-G2 has plenty of time to find its own rhythm, its own beat, to take its place in the aviation community in much the same way as the red-rock formations in the sacred land that now honor the Navajo. Like the Monument Valley, the Cirrus SR22-G2 is a witness to the beauty of evolution.