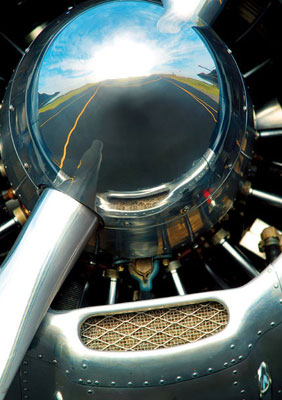 In 1947, enthusiasm reigned supreme in the general aircraft industry. With the release of the bold new Cessna 195, the Wichita, Kan., aircraft maker gleefully announced the introduction of a “completely practical, personal and company airliner.” Other great American companies who stood to enjoy a new profit stream from personal aircraft joined in the celebration. Phillips Petroleum ran an advertising campaign wishing “success to you and the new Cessna 195 Businessliner.” At that time, it was as close to a cabin-class single as you could get. Cessna attempted to convince customers that these were “four- to five-place airliners, not light planes,” and worked hard to position the C-195 and its lower-powered sibling, the C-190, as business airplanes. The plan was to build and sell 300 to 400 of the new Businessliners a year.

Unfortunately, they missed the market by a long shot. The Beechcraft Bonanza was new to the market in 1947, and Piper brought out the Comanche as competition as well. A big radial engine and conventional gear was instantly nostalgic for the business market in the early 1950s. Beech and Piper chose to pursue tricycle retractable gear and flat engines, both of which made for smaller, cheaper and faster airplanes. The Bonanza always was more affordable to buy and operate than the Businessliner. Cessna built 1,094 of the C-190-series airplanes; Beech eventually made more than 10,000 Bonanzas. If you measure success by numbers, the Beech beat the Cessna, but it didn’t look quite as cool.

The Cessna 195 is a throwback to classic design. If you like cool, you’ll turn your head when this work of art floats by in the flare. Tapered lines to the tail and a round rudder—a smooth, flowing line.

The big Cessna taildragger is an art-deco masterpiece, ahead of and behind its time. Some say it descended from the pre-war 1930s Airmaster. And perhaps Cessna misjudged the market acceptance for a big radial and conventional gear, but it built a strong airplane with a few innovations.

The Businessliner has aged better than its contemporary competition, the Beech 35 through C 35 Bonanza. Those airplanes had several airworthiness directives that affected the spars and ruddervators. The only significant AD on the 195 required a one-time X-ray of the spar, with brackets installed at the wing root and a recurring visual inspection for follow-up. The early light gear has posed a problem, and some have replaced it with a thicker-gauge spring gear. But all things considered, there are few peccadilloes for this 55-year-old airplane.

A number of innovations were tried on the Businessliner, ranging from the cantilever high wing to a push-button baggage door (with the button flush mounted in the door frame), a parking brake that locked the controls, as well as the brakes and a hinged engine mount for easier access. The C-195 is a five-seater with a bench seat for three in the back. No scrimping on roominess here. The U.S. Air Force bought a few airplanes, known as the LC-126. They added a Pratt & Whitney R-985 450-hp radial and made it a six-passenger airplane. The warbird version served as a rescue platform in the rough and severe weather environment of Alaska. For several years, the 10th Rescue Squadron flew it and saved many lives. The 10th even put the airplane on skis and floats, serving successfully in that role.

The C-195 shared a few ideas with the Beechcraft Bonanzas, with such things as vernier engine controls and a retractable step. Later models of the C-195 featured a crosswind gear that allowed the wheels to swivel for slight drift or a crab during landing. Cessna advertised an operating cost of $30 to $35 an hour, based on 600 hours a year of usage. Some of its claims and innovations were perhaps a little optimistic. Others have been dropped completely through the years, but nothing takes away from the beautiful, flowing lines of this classic airplane.

Advertisement
Craig Bair agrees. He thinks the Cessna 195 is the prettiest airplane ever built, and this is the second time he has owned his N302GT. The first time around, his father actually owned the airplane. Bair grew up with it, took his first rides in it and had seen it in sad shape after his father sold it. Flying was ingrained into Bair’s psyche from the start. He’s a third-generation crop duster, and “hooked on flying” would be a mild phrase to describe his enthusiasm.

After his father sold it, the new owner took it home, parked it outside under a tree and didn’t make a payment. The tree didn’t offer protection from the weather or unwanted visitors. Craig’s father assisted with the repossession of the airplane a few months later. It bounced around the Midwest for a few years before Bair happened to decide to go to the fly-in at Broadhead, Wis. Flying as a passenger in a Howard DGA, he was looking at the aircraft on the ground and instantly recognized his father’s Cessna 195. He ran over after landing and ended up talking with the owner for nearly four hours. Bair was excited to see that the new owner of N302GT was taking good care of the airplane and thanked him for treating it right. After spending most of the day with the C-195, he asked the owner to call if he ever thought about selling it.

Before long, the owner called and told him he had indeed decided to sell it and gave him two weeks to fulfill his promise. Bair was in a quandary—he had bought a “Damn Good Airplane” (the Howard DGA) from a reluctant owner and very much enjoyed it. He called the former owner to see if he wanted to buy it back. What he found was a happy pilot who wanted to see his DGA as much as Bair wanted to fly his dad’s Cessna 195. Within two weeks, they arranged a three-way trade that brought N302GT home again.

Remarkably, the airplane is original; it has never been restored. To put the airplane back in pristine shape, Bair replaced the upholstery and a few of the radios and put on an overhauled engine. He also touched up the original paint. The natural metal was brought back to life with a good polishing and still requires more work to keep shiny than Bair likes to do these days. Other than that, it’s an all-original, no-damage-history airplane.

The claim of “no damage history” is no small order. There are something less than 600 C-190-series Cessnas left on the FAA registry. More than half of them have succumbed to ground loops, and a significant number were destroyed in taxi accidents. To find one that hasn’t been wrecked or that doesn’t need serious restoration is extremely unusual. This airplane is a head-turner wherever it goes. And it doesn’t just grace the ramp at home. It goes flying, and often.

Bair flies it more than 145 hours a year, mostly for fun, sometimes for business. He flies 2.5-hour legs with five aboard, regularly seeing 14.5 gph. He keeps the airplane IFR-certified, but flies it VFR and loads it with whatever he wants. Totaling everything together, hangar, maintenance, insurance, fuel and oil, he spends $117 an hour to enjoy the airplane. As far as transportation costs go, that’s not too bad for a personal airliner.