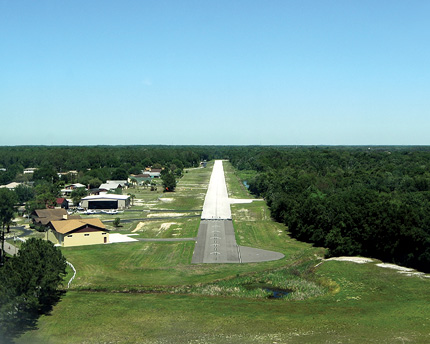 People often associate memorable flights with a particular aircraft or airport. Others subscribe to the notion that the journey is more important than the destination. If you took all these aspects together and added your spouse and a friend, then you’d have the components of my most memorable flight.

My obsession with aviation began years ago, when I was a child of the late 1950s and early 1960s. My parents would take me out to Tampa Airport to watch aircraft movements up close (remember those days?). Our family was economically challenged (yeah, poor)—but that never killed the dream to fly.

In 1970, when I was 16, I was lucky enough to get a part-time job with a construction company building a residential airport (FA40, Hidden Lake) near my hometown of New Port Richey, Fla. I was tasked with removing, by hand, the palmetto roots missed by bulldozers. While the assignment wasn’t critical, it didn’t matter to me, because I was working in aviation.

Slowly the runway took shape and a thick base of compacted lime rock was in place, waiting for the asphalt necessary to complete the strip. Then the coolest thing happened: A Sky King–like C-310, carrying the property’s owner, landed on the rough runway. This reinforced my perception that I was making a real contribution to flight. While the pilot was all business, reviewing the progress of his investment, he did throw a few crumbs of aviation wisdom my way before he departed. The hook was set, someday I was going to fly into and land at this airport.

As time went on and my financial picture improved, I earned my instrument and commercial tickets. Flying to Sun ’n Fun 2009 would provide me with an opportunity to accomplish my long-delayed goal, and dovetail in a secondary goal of shooting a GCA/PAR approach at KNBC (Beaufort Marine Corps Air Station/Merritt Field in Beaufort, S.C.), where I had been a Marine Approach Controller. After making contact with a few retired Marines who still lived in the area, and meeting all of the military security criteria, I received approval to shoot a “nonstop” PAR approach into KNBC, en route to Florida.

Shortly before the trip, I was invited to be a guest speaker at the 50th anniversary of my elementary school. This was the inducement I used to get my wife to come along on the flight. She wasn’t thrilled at the prospect of sitting in a Cherokee for almost seven hours, but the C-182 Turbo we took had a brand-new G1000/GFC 700/XM package. One look at the Skylane, and she was on board for the trip.

My wife and friend Jay Farr (also a Cessna driver) had a wonderful flight in the airplane. Sure, we could have climbed higher and used the oxygen system, but we wanted to savor that new-airplane smell. Because I piped the XM radio back to Tammy while she referenced the big G1000 moving map and luxuriated in the large rear passenger area, she was never bored.

The highlight of the trip would be landing back at the little runway that started it all. Hidden Lake, like most of Florida, had changed in the 30+ years since it had been built: It was now a thriving, privately owned aviation community with 80+ aircraft. Although it’s a private facility, anyone can land there, and fuel is available (prior permission required). The airport’s paved 4,400×50-foot runway is sheltered by trees close to and along its eastern side, and I was advised that the winds could be fickle.

I was concerned that it would be difficult to access FA40, but Rob Marlowe and Steve Carper very graciously provided me with all the necessary approvals. They mentioned that they’d be there for my arrival, in case I needed any assistance. While grateful, my initial thought was, “Uh oh, my landing is going to be rated by these guys.”

Prior to landing, I made a few passes over the school and my old homestead, taking dozens of photographs and enjoying my time in the air, before returning to the traffic pattern. I was on the cusp of achieving a personal goal, set so long ago, and I wanted to savor the moment. I was keenly aware that with the squeak of the gear, this dream would be accomplished, so I flew the pattern as if I were taking a commercial checkride. I greased it on to complete my trip with a flourish, not for the audience but for me. During the taxi, I reflected back on the C-310 landing in 1970 and thought, “I, too, have arrived, and it didn’t take two engines—that’s a dream for the next trip!”