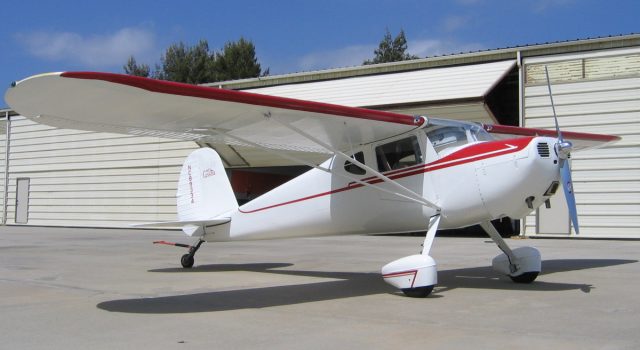 When do planes that are developed from an earlier model stop being derivatives of that original design? Is the Gulfstream G550 a derivative of the original turboprop Gulfstream I, which begat the G2? No way . . . but kind of, too.

Now, if Cessna’s lineage is to be traced forward from one point, as I’ve suggested above, then the overwhelmingly most important model in the leading brand’s history is the Cessna 140. To say that the little two-seat, 85-hp taildragging 140 is the progenitor of the P-210 is a stretch, literally and otherwise, but one can indeed trace the ancestry of that fast, pressurized, high-performance, retractable-gear, turbocharged single directly back to the 140 through a handful of intermediate steps. In this way, the 140 made Cessna Aircraft.

On its own merits, the 140 is a delight. I’ve flown a few of them and a 120 as well. They handle beautifully and are relatively well mannered on the ground, though you forget that it’s a taildragger at your peril. The 140 isn’t all that slow, either. In stock configuration with the 85-hp Continental C-85, it can achieve the advertised 90 knots and even better when they’ve gotten a horsepower boost. I flew one years ago that had a 125 hp Lycoming. It was a going machine!

Now, as you might know, the designations and equipment on the 140 and its associates is a complicated subject. In its simplest terms, here it is.

In 1946, the 140 was an all-new design with an all-metal fuselage and metal wings with fabric covering. It had flaps and a back window. It wasn’t a development of the 120, which lacked that rear window, an electrical system, the flaps and the fancy finish work. The 120 was instead a budget version of the 140. The 140A debuted in 1949 (the 120 got dropped). This last model featured metal-covered wings and a few other upgrades.

Confusing the picture is the fact that most of these planes have been upgraded in the intervening 70-plus years since they came to market. Most have metal-covered wings, most 120s have electrical systems and a back window, and many of these planes have gotten a boost in power with STCs that allow the installation of everything from 90 hp to the aforementioned 125 hp Lycoming.

When Cessna launched the comely little Model 140 in 1946 right after the end of World War II, it wasn’t alone in guessing there’d be a market for inexpensive little planes for all the GIs returning from around the world. The guessing outpaced the demand, however, and that era in U.S aviation history saw the greatest oversupply of airplanes in history.

The 140 was a victim of that oversupply, though not so much that it meant the demise of Cessna, clearly, as it did for several other notable plane makers, like Globe and Aeronca. Cessna merely shifted gears when folks stopped buying the 140 and put a nose gear on it and called it the 150. And we all know how that went. That all said, the 140 was far from a failure. Cessna built nearly 8,000 120, 140 and 140A planes over the type’s five-year run from 1946 to 1951. Aircraft manufacturers today would give their left strut to have that kind of a failure!