If you haven’t yet flown a Tiger, you’ve missed out on one of general aviation’s real treats. As far as I’m concerned, the world has become a better place since the Tiger was reintroduced a few years ago. Whether the aircraft in question is a new 2006 AG-5B Tiger, a vintage American General machine from the early ’90s or an original Grumman American from the late ’70s, Tigers are among the most fun-flying airplanes on earth. 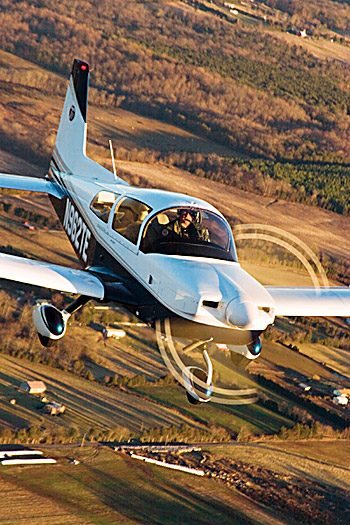 Practically everyone who has flown a Tiger has something good to say about it, regardless of its vintage. Today’s Tiger, though a dramatically improved airplane in terms of avionics and construction technology, flies as well as the original from 30 years ago, and that’s a ringing endorsement rather than a criticism of an outdated design model.

The Tiger flies extremely well by both ’70s and contemporary standards. Back in the old days when the originals were still rolling out the doors of the Savannah, Ga., factory, I ferried a dozen or more Tigers to the company’s number one dealer, Performance Aircraft located in Long Beach, Calif. Though many other ferry trips have long since faded from my memory, I still recall those Tiger ferries with reverence.

Today’s Tiger has seen some changes as the airplane has evolved, primarily in terms of avionics. The latest models feature the most exciting avionics suite in the industry: The Garmin G1000, an all-inclusive glass panel that makes virtually everything that’s come before look archaic. Learning to use an integrated avionics system with electronic rolling tapes rather than round, analog instruments with moving needles may take some time, but when you’ve finally made the adjustment, you’ll be amazed at how much easier everything becomes.

Mooney, Cessna, Diamond and Beech have all adopted the G1000 system in their top-of-the-line models, and Tiger Aircraft of Martinsburg, W.Va., has also embraced the new technology wholeheartedly, utilizing the two-screen Garmin G1000 system in its updated model. (Cessna will use a three-screen version of the G1000 in its upcoming Mustang VLJ.)

For those pilots who have perhaps been living on the dark side of the moon for the last several years, the Garmin G1000 incorporates virtually all flight and engine instruments plus all avionics systems and readouts into two flat-screen displays—a 10-inch primary flight display (PFD) directly in front of the pilot and another 10-inch display immediately to the right.

Though the Garmin G1000 is the Tiger’s centerpiece, the airplane that surrounds it is one of the aviation industry’s most delightful machines. Like the original from 30 years ago, the updated model from Tiger Aircraft incorporates all the good things that came before without sacrificing the elements that made the Tiger such a popular flying machine way back in the day.

From the moment you approach a Tiger, you may begin to perceive how much it differs from anything that you’ve ever flown before. First of all, the design doesn’t fit the mold for standard swept aircraft. The vertical tail stands vertically for a change, à la Mooney, and the fuselage begs for a stretch. Even less conventional for a production airplane, all of its surfaces are completely smooth and rivetless, a function of aluminum bonding, a technique that’s borrowed from Grumman’s experience building military fighters. The wing, fuselage and all control surfaces utilize bonding.

In combination with aluminum honeycomb construction, the bonding results in an inherently stronger airplane without rivet holes to weaken the structure. Position lights are flushed to the wingtips and to the top of the vertical stabilizer—the twin landing lights are similarly recessed and flushed. All metal surfaces are either chem-filled aluminum or cadmium-plated steel for maximum corrosion resistance—another technique borrowed from the military.

Climb up onto either wing-walk, slide the overhead entry hatch aft, and the Tiger beckons you with its potential for recreational fun. The only other airplanes I can think of that employ such sliding hatches are military fighters or serious aerobatic models such as the Extra 300. No one will ever mistake a Tiger for one of those airplanes, but it’s a similarly light-hearted machine, dedicated more to the sheer joy of flying than to flight speed. The original hatch was a source of problems on the early aircraft, susceptible to side loading and jamming. The machining and materials on the current version are much improved, and whether you’re a Minnesota Vikings lineman or a 110-pound supermodel, the hatch slides forward and aft with minimum effort.

Step over the cabin wall, flip up the bottom seat cushion with your toe and settle into the snug cabin—you’re ready for the Tiger experience. If you’re flying with a G1000, the panel almost looks too sophisticated and serious to be mounted on such a dedicated sport machine. The cabin cross section measures about 40 inches, which provides reasonable room for most people. With the hatch shut, the cabin is 46 inches, again plenty for most folks. Baggage goes aboard through its own door at aft cabin, 120 pounds max, or you can pull out the rear-seat cushions and fold down the seat backs to double the cargo area.

Fire up the little carbureted Lycoming, and the airplane comes to life around you. The Garmin G1000 has its own battery separate from the aircraft battery, designed to provide a full half hour of backup avionics power in the event of a total electrical failure. Like most companies, Tiger Aircraft currently provides a backup analog artificial horizon, altimeter and airspeed indicator, just in case.

Taxiing the Tiger is a combination of sheer joy and total frustration if your only previous experience has been with a steerable nosewheel. It takes a while to get used to the semifree castering third wheel, but once you’ve made the adjustment, you‘re almost guaranteed to love the airplane’s remarkable ground maneuverability. Hold one brake just at the edge of lock (locked-wheel turns aren’t advised because of the possibility of flat-spotting tires), and you can spin the airplane through a 180 in its own wingspan. The Tiger’s free-spirited nosegear fits the airplane’s personality perfectly and is the next best thing to a tailwheel.

With the hatch full back, the Tiger is the ultimate flying convertible on the ground. From engine start to just before taking the runway, you can taxi with the hatch full aft or leave it cracked an inch or two for better airflow with less wind. It’s not as good as air conditioning, but definitely more fun. (It’s also not that much fun climbing in and out through the sliding hatch in the rain.)

As any Tiger owner or pilot will tell you, the best thing about the plane is the way it flies. Numbers don’t even begin to tell the full story, but the airplane jumps off in less than 1,000 feet of runway and starts uphill at an easy 800 fpm from sea level. That’s all the more impressive considering that the Tiger employs a fairly small wing in contrast to airplanes such as the Skyhawk S or Piper Archer. Visibility is excellent for a low wing, with a windshield that folds back practically to the pilot’s line of sight and side windows cut well up into the roof.

Level off at 8,500 feet less than 15 minutes after liftoff, and you’re liable to see cruise speeds on the order of 140 knots or more. That’s easily equivalent to a whole raft of 200 hp retractables from the ’70s and ’80s. Tiger Aircraft lists the AG-5B’s max cruise at 143 knots at midcruise weight and 8,500 feet. In other words, if you depart with a max gross weight of 2,400 pounds, you might reasonably expect to see speeds near 140 knots after two to three hours of cruising. Max fuel is 51 gallons, and at a burn of around 10.5 gph, you could plan for four hours plus reserve, worth more than 500 nm between fuel stops.

While that’s better than anything in its class (except perhaps the Cirrus SR-20), the Tiger’s greatest delight isn’t how fast or how far it travels but simply how it travels. Among normal category airplanes, it’s hard to imagine anything that’s as much fun to drive through the sky as a Tiger. Well, perhaps a Bellanca Viking if you could talk the folks in Minnesota into building you one. Roll rate is quicker than anything in the class, and pitch response is well harmonized. The airplane goes where you point it with a little rudder coordination, suggesting that adverse yaw is at a minimum. You can even do your tricks with the sliding canopy back a few inches if you can stand the noise.

If you wonder whether anyone ever considered certifying the airplane for limited acro, the answer is yes. The late Roy Lopresti was almost single-handedly responsible for the Tiger design, and Roy once told me that Grumman flew an aerobatic version but elected not to pursue the project when they decided to shut down the piston line in 1979 to concentrate on business jets.

Stalls aren’t totally benign in the Tiger, but there’s nothing nasty hidden in the closet. If the ball is anywhere near centered, the airplane will break straight ahead, and a slight release of back pressure will restore lift to the wing.

For that reason, landings are hardly a challenge with the flexible gear legs, provided you don’t touch down nosewheel first. Pilots new to the older Tigers sometimes land too flat, and that can start a porpoise that could eventually take out the nosewheel and prop. Full-flap slips are perfectly acceptable without risk of blanking the tail, though the small, electric flaps themselves aren’t that effective, reducing stall by only three knots.

The Garmin G1000 adds a new dimension to Tiger flying, though it costs an extra $35,000. The good news is that now, you can enjoy the best of both worlds—performance and handling that have always been better than anything else in the class, plus a level of avionics sophistication appropriate to the 21st century.