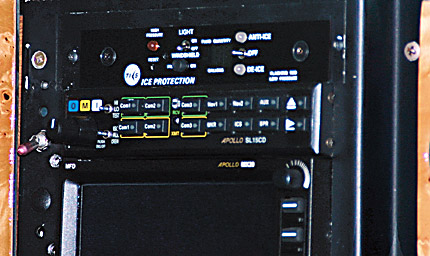 Publishing an aviation magazine can be a lot of fun, especially when the assignment is to refurbish an airplane like a 1982 B36TC Bonanza, our most recent project plane. If you’ve been reading Plane & Pilot over the last few years, you’re probably familiar with this plane from the August and September 2003 issues. At that time, we pulled the best equipment on the market to retrofit the 20-year-old aircraft. The idea was to showcase all the emerging technology for high-performance, piston-engine aircraft.

Turns out, our retrofitted Bonanza was an example of one of the safest airplanes in the sky—the cockpit had a wealth of information, including traffic and weather (Stormscope and datalink) presented on multi-function displays. Before considering the project finished, however, we gave one final consideration to flight safety.

Over the last two years, we’d cancelled several flights due to icing or potential icing. Flying east out of Los Angeles means minimum en route altitudes (MEAs) of 13,000 or, to the north, 9,000, which translates into ice if there’s any moisture in the air. Securing truly safe and dependable anti-icing equipment for the single-engine airplane was in order.

Traditional boots aren’t available for Bonanzas, so the only choices were the TKS system from Aerospace Systems & Technologies (AS&T) of Salina, Kans., or the new electric Thermawing from Kelly Aerospace. Our first step was to discuss the offerings with each company. The good news was that TKS was already certified for Bonanzas and had certification for known icing on A36s; Kelly was trying to get the STC certification for anti-icing Bonanzas.

One reason we chose the TKS system was that they agreed to do the known- icing certification for the B36TC using our plane. Other reasons for choosing the TKS system include:

• Fluid runback. This provides total airframe ice protection. Engine inlet, cowl, windshield, flight controls, antennas, and everything in the propwash area and behind the weeping panels will be ice-free.

• Ease of use. A pilot simply selects one of two operation modes—deice or anti-ice. This relieves the workload, which enables a pilot to focus on flying and making important safety decisions.

• Reliable. The TKS system has one moving part, which is the pump. Thousands of service hours have proven the design to be trustworthy.

• High performance. The systems operate by depressing the freezing point of the moisture encountered during flight. Ethylene glycol exudes at a rate that will effectively prevent the mixture from freezing and forming ice. The systems are designed to exude enough glycol to make an encounter with rain less of an event.

TKS is an ice-protection system that keeps ice off of the aircraft while maintaining aircraft performance in the icing environment. An antifreeze solution is pumped from panels mounted on the horizontal and vertical stabilizers and leading edges of the wings. The solution mixes with the supercooled water in the cloud, depresses its freezing point, and allows the mixture to flow off the aircraft without freezing. The system is designed to be anti-icing, but it’s also capable of deicing (removing all or most of the ice) an aircraft as well. When ice has accumulated on the leading edges, the antifreeze solution will chemically break down the bond between the ice and airframe, allowing the aerodynamic forces on the ice to carry it away. This allows the system to clear the airframe of accumulated ice before transitioning to anti-ice protection.

A valuable side effect of TKS ice protection is the reduction of runback icing on the wings and tail. Once fluid departs the panel on the surface’s leading edge, it flows aft over the upper and lower surfaces and departs the aircraft at the trailing edge. This runback effect keeps ice accumulation in check aft of the panels, from runback or from impact of larger water droplets. This is a positive side effect, given the concern for ice protection during large-droplet encounters. Systems have been developed for several general aviation aircraft, ranging from safety of flight (installation) STCs for inadvertent icing encounters, to full known- icing certifications.

The weight of a TKS ice-protection system for a high-performance, single-engine aircraft will typically fall between 35 and 40 pounds without fluid. The final value is dependent on the size of the aircraft, the coverage and size of the leading edge panels and the configuration of the mechanical components. Systems with individually mounted components tend to be lighter than pallet-based systems, because of the added weight of the pallet framework. The tradeoff is weight versus ease of installation for these components.

Fluid weight depends entirely on the quantity carried. At a weight of 9.2 pounds per gallon, fluid weight falls in the range of 55 to 70 pounds. This weight can, however, be eliminated in non-icing seasons by draining the fluid tank or not replenishing it.

Ice protection with a TKS system is achieved by mounting laser-drilled titanium panels on the leading edges of the wings and horizontal and vertical stabilizers. Secondary fairings or structures such as wing-lift struts can be protected in a similar manner. Propellers are protected with fluid slinger rings, and windshields are provided with spraybars. Engine inlets may be protected in a similar fashion.

The outer skin of the ice-protection panels is manufactured with titanium, which is typically 0.7 mm to 0.9 mm thick. The lightweight titanium provides excellent strength, durability and corrosion resistance. The panel skin is perforated with eight-hundred 0.0025-inch laser- drilling holes per square inch. The porous area of the titanium panels is designed to cover stagnation point travel on the appropriate leading edge over a normal operating environment. The range is typically from best rate of climb at the low end to Vno (maximum structural cruising speed). Conservative margins are added to this range. The back plate of a typical panel is formed with stainless steel or titanium to create a reservoir for the ice-protection fluid. A porous membrane between the outer skin and the reservoir assures an even flow and distribution of fluid throughout the panel’s porous area.

The porous panels can be bonded or attached as a cuff over a leading edge (typical in STC installations) or built in as the leading edge. Most high-performance general aviation singles and twins utilize the cuff method. Panels are bonded to the airframe with a two-part, flexible adhesive. Fluid is supplied to the panels and propeller by a positive displacement, constant volume-metering pump. The two-speed pump provides two flow rates to the panels and propeller. The low speed supplies fluid for the design point of anti-icing during a maximum continuous icing condition. The high speed doubles the flow rate for removing accumulated ice or providing ice protection for more-severe conditions. Flow rates are designed for this level of performance, regardless of the certification basis for the system.

For systems that aren’t certified for flight into known icing, one metering pump is provided. For systems certified for flight into known icing, two pumps are installed for redundancy. The pumps are individually selectable. Fluid for the windshield spraybar system is provided by an on-demand gear pump. The spraybar may be activated as needed to clear forward vision through the windshield. Similar to the metering pump, one or two pumps are provided depending on the certification basis. The fluid passes through a microfilter prior to distribution to the porous panels and propeller(s). The filter assures all contaminants are removed from the fluid to prevent panel blockage. A nylon tubing system carries the fluid to proportioning units typically located in the aircraft’s wings and tail. The proportioning units divide the flow into the volumetric requirements of each panel or device supplied through the unit. Each panel and device is fed again with nylon tubing.

Each system is provided with a fluid reservoir that ensures a minimum ice-protection endurance when filled. All systems are designed for a minimum anti-ice endurance of 2.5 hours. The endurance can be increased depending on available volume for the reservoir and weight constraints on the amount of carried fluid. For the high-performance single, the design fluid quantity typically falls in a range of 6 to 7.8 gallons. The system is operated and monitored through a control panel in the cockpit. All modes of operation and selection for the metering and windshield pumps are controlled through the panel. Coupled to a float sensor in the reservoir, the remaining quantity of fluid is displayed. The system’s operational state may also be monitored with the panel.

Low power consumption is another important aspect of TKS ice protection. Little demand is placed on the aircraft electrical system by the TKS system—28 volts typically draw 1.5 amps of current during normal operation. Complete airframe ice protection is provided for a fraction of the power consumed by an airframe’s resistance heating device.

Bottom line, with the TKS system, the Bonanza gets complete airframe anti-icing and deicing benefits from the installation. In fact, because our Bonanza doesn’t have a hot prop, we’re installing the slinger on the propeller and the windshield, both of which will thoroughly distribute anti-icing fluid over the entire airframe, which is the best of all worlds. The Thermawing system only provides leading-edge ice protection with a hot prop option.

Our decision involved adding weight and, therefore, losing more precious useful load, but then the majority of the added weight (the fluid) is only added when needed. The system is more expensive, but you get what you pay for.

Contact Aerospace Systems and Technologies by visiting www.weeping wings.com or call them at (888) 865-5511.