If you were to ask a representative sample of American pilots to name a handful of beautiful airplanes, the North American P-51 Mustang would be on almost everyone’s short list. I know because I’ve been asking that question for years now. (SEE OUR GALLERY BELOW)

What makes an airplane beautiful—for that matter, what makes anything or anyone beautiful—is largely a matter of opinion. It’s interesting, though, that there’s so much agreement about certain people and objects that we find pleasing, because that suggests that there’s something quantifiable going on. In fact, scientists have been working for the past decade in pockets around the world to figure this out, and some have, with some success, developed computer programs to try to pick out a particularly attractive human face from a crowd of run-of-the-mill candidate faces. They speak about the golden ratio, a geometric arrangement of features that humans find pleasing in a stranger’s face, as being key to this recognition.

If researchers could develop a program to spot aesthetically pleasing planes, I’d suggest starting with the P-51 as a model for airborne beauty. Why this is so, I can’t say for sure, but its ratios are surely golden, its lines both sharp, like its wingtips, and rounded, like its canopy, lending a feeling of strength, agility, grace and elegance to a machine that was developed to be a better way to shoot other airplanes out of the sky.

North American developed the P-51 as part of an Allied push to come up with a good fighter that could successfully escort B-17s and other heavy bombers of the day into Germany and then return to England. Time was of the essence, and North American famously turned out the first model in just over 100 days. So it seems as though beauty was closely linked to expediency and mission needs.

Of the more than 15,000 P-51s built for the war effort, there are today around 300 complete examples and around 175 airworthy planes, around 100 of which are regularly flown, much to the delight of airshow-goers who are lucky enough to witness the majesty of a P-51 in flight.

As a side note, part of the beauty of the P-51 is the magical sound of its Merlin V-12 engine. If you’ve heard it, you know what we’re talking about. But since our print edition of this magazine doesn’t yet have a soundtrack to go along with it, we’ll leave you with our gallery of stunning images of what might be the most beautiful airplane ever built. 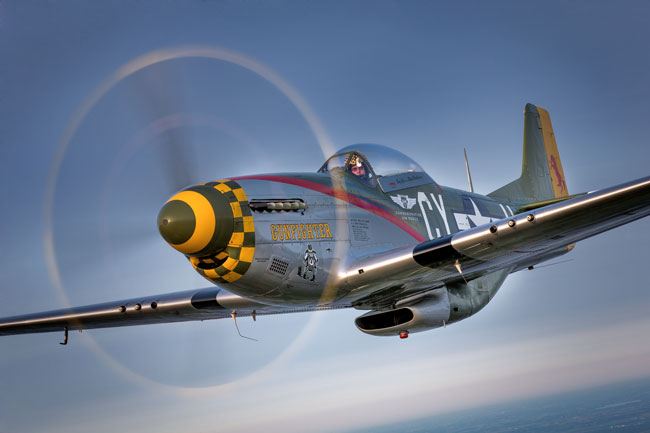 One of the best-known P-51s on the circuit is Gunfighter, a -D model owned and operated by the Commemorative Air Force that’s been flying shows for 35 years. Photo by Jim Koepnick.