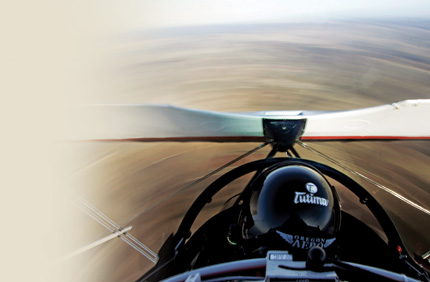 When I was a student pilot and my instructor would send me on solo flights to practice maneuvers, stalls were always last on my list.

If I botched the recovery, I reasoned, I might inadvertently enter a spin—something I knew nothing about, other than the obvious fact that it would instantly and viciously send my aircraft out of control, and I’d burn a large hole into the Malibu shoreline. So, I’d do a clearing turn, bring power to idle and pull back on the controls, and when in a nose-high attitude…well, that was “close enough.” Steep turns were so much more fun, anyway.

“It’s a shame that we don’t teach people how not to crash,” remarks Ben Freelove, an instructor at the Sean D. Tucker Tutima Academy of Aviation Safety (www.tutimaacademy.com) in King City, Calif. “But most flight schools only teach a small portion of the full repertoire of flight attitudes. There has been little evolution in stick-and-rudder training, and as result, misconceptions are passed down.

On The Edge
When pilots are pushed to the edge of their comfort zone, they become stressed. And when pilots are stressed, they don’t fly well. Tutima offers a Pilot Awareness Training (PAT) course that covers spin recovery, unusual attitudes and basic aerobatics in a Pitts or Extra. It gives students a chance to expand their skills by pushing boundaries and gaining confidence in a safe and controlled environment. “You can let things go way past where you’d go in a normal airplane,” says Freelove. “You can’t test your Bonanza like you can test an aerobatic plane. Our Pitts is super strong—you can’t break it!”

The course typically entails six to eight hours of ground school and five hours of flight time, spread out over three days. A large portion of the ground instruction focuses on the psychological aspects of upset recovery; this makes Tutima’s program unique. To get comfortable in the aircraft and work on stick-and-rudder skills, Freelove and I start off with Dutch rolls, an aileron-rudder coordination exercise, followed by a “shapes” exercise (using the nose of the Pitts to trace squares, diamonds and circles on the horizon). “Students can’t put us into something that we can’t recover from,” the 3,000-hour instructor tells me. “You can try whatever you want, but you can’t scare instructors here!” 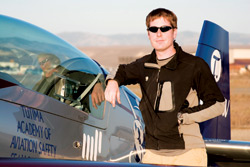 Myth Busters
“Because many flight schools emphasize stall avoidance rather than control, certain myths are passed down to new pilots,” gripes Freelove. Tutima’s course aims to dispel these untruths by desensitizing students to the idea that a stall is scary. One common myth is that when a wing stalls, it “stops flying” and the pilot will lose control of the airplane. “We teach students to fly in a stall,” insists Freelove. Another myth is that if you get too slow, you’ll stall. “Pulling too far back on the elevator is what really causes a stall. This can happen at any attitude and any airspeed.”

Common stall-spin scenarios include a severely skidding turn close to the ground (such as a correction to an overshoot during a base-to-final turn), a high-density altitude takeoff and an approach-to-land during engine failure (when the pilot pulls back in an attempt to extend the glide). “You’re programmed to pull back,” says Freelove. “Most loss-of-control accidents are really caused by a pilot panicking and pulling back on the controls. If your brain senses a survival situation (such as fear or panic), you may not have control over your behavior and you’ll revert to whatever basic level of training you have. If you don’t have any, you’ll most likely pull all the way back on the elevator, subconsciously believing it’ll make the airplane go up! It’s easy to reprogram this instinct, and our course does just that.”

We practice power-off stalls, power-on stalls, accelerated stalls, stalls in a turn and the various phases of spins: entry, incipient, developed and recovery. To recover from a spin in the Pitts there are just a few short steps: Pull the power back to idle, look straight over the nose of the airplane and put in full rudder opposite to the rotation of the spin, and neutralize the stick so that there’s no aileron or elevator in the equation. When the rotation stops, neutralize the rudder, pull out of the dive and add power.

The first few spins are a bit disorienting, but after awhile they become quite manageable, and even enjoyable! “It’s surprising how quickly students go from white knuckles and being terrified to being worried about stopping the spin on their desired heading,” says Bill Stein, a professional air show pilot and guest instructor at Tutima.

Freelove and I work on headings and altitudes, and play with tightening and loosening upright spins with forward and back elevator. We practice inverted spins, which have the same recovery, and he shows me how adding power and aileron flattens the spin.

I Skid You Not
Another enlightening part of the training is when Freelove demonstrates the real difference between a skid and a slip in the Pitts. If you’re skidding in a turn while loading up the airplane enough to stall it, you’ll basically snap-roll and find yourself upside-down and entering a spin. This is a classic mistake pilots might make when overshooting a base-to-final turn close to the ground. “A skid is always too much rudder to the ground. This is bad,” explains Freelove. “A slip is rudder to the sky. This is okay.”

Beating Up the Box
Aerobatics is all about fully utilizing the airplane in three dimensions and making everything work relative to the horizon. Wingovers are graceful figures that are fun to fly and get you in tune with the airplane. “Wingovers teach students that they can fly an airplane knife-edge at stall speed and not fall out of the sky,” says Stein. 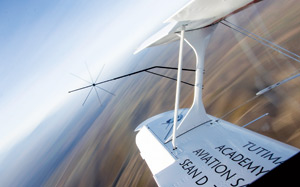 The challenge of a loop is to fly by control position, not pressure. Pull the stick back and hold it in the same spot (not necessarily an easy task, since the pressures on the stick are constantly changing) until you’ve made 360 degrees of pitch change and you’re back in the same position you started at. To prove that pilots do have control while in a stall, Freelove shows me how to fly a loop while stalled throughout its entirety. (Later, while practicing a regular loop, I accidentally stalled but was able to recognize it, immediately correct and continue the loop. This was a far cry from my previous worry that a wing drop might lead to sudden disaster; no longer did it feel like a big deal!)

To execute a ballistic aileron roll, pull the nose up 20 degrees above the horizon, release any back pressure on the stick and add a bunch of aileron—the world becomes a momentary blur, revolving around the nose of the airplane. My favorite maneuver, hammerheads, allows you to accelerate wildly while pointing straight down at the ground before pulling the airplane back to level. We also practice Immelmans and Cuban eights, both built from the fundamentals learned in loops, rolls and hammerheads.

Not So Unusual
After “beating up” the aerobatic box, upset recovery feels a bit mundane—not something I ever imagined I’d say. Freelove teaches me the wings-level technique of “unload and roll”: neutralize elevator and use full aileron with coordinated rudder to roll upright. I close my eyes while he puts the airplane in unusual attitudes, but nothing feels unusual about it anymore. No matter which direction we’re pointed—at the sky, the ground, somewhere between—the situational awareness is there and I roll level. The instinct to pull back is no more—I’ve been reprogrammed!