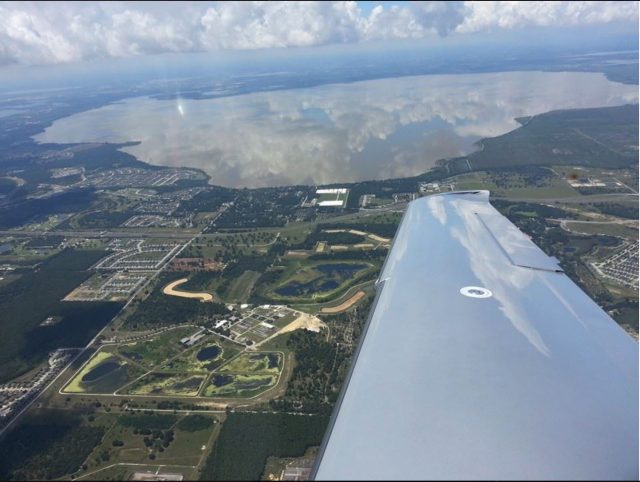 I look back fondly but with a clear eye at my flight training way back in the 1970s, done high or not so high above the Joshua trees, sandy basins and rough crumbling granite ridges of the American southwest, which still looks pretty much the same. It’s vast. For me, the training was not all about getting a license or getting a job but merely about getting to fly solo. That was my goal. It still kind of is. I don’t think I’m alone in this.

Almost without exception, the most consequential flights I made were the ones when I took off with no instructor weighing me down. I’m being facetious, of course. The instructors—and I had some great ones—were critical to my getting through flight training while not killing myself or any innocent coyotes in the sagebrush below. But they also wanted to give me the confidence I sorely needed that I could do this thing on my own, solo.

I know all the clichés about flying, the old saw about “slipping the surly bonds,” about how flying sets you free and lets you somehow “touch the face of God,” which I always thought was a really weird thing to say. Regardless, the truth is far more pedestrian and, as such, actually meaningful. Funny how that works.

Flying was scary at first. Not when I soloed—I was a good stick and ready for that—but later on, when I wandered away from my home field on my first solo ventures to places like Pearblossom and Thermal. Lord, I wasn’t ready!

And I thought there must be something wrong with me because there has always been this generations-old practice of letting kids take an airplane hundreds of miles away from home after having done it once or twice with an instructor (who could bail you out at the first sign of trouble). That experience would possibly include weather weirdness (which it did), airports I had never seen before but now had to land at (a couple baffled me), and decisions I knew I would have to make drawing way more on intuition than experience. I was really inexperienced, too, but I was smart and observant enough to know that these solo ventures would likely involve surprises not of my doing and screw-ups completely of my own doing. That I would somehow need to have the wherewithal in my 16-year-old brain to figure out what to do about it all…it just sounded crazy to me.

Truth was, I was right. It really is a modified version of tossing the kid into the deep end to teach them how to swim, which, interestingly, was precisely how my father taught me to swim, if coming up for air and then thrashing my way to the side of the pool before climbing out and running away before he could do it again is learning how to swim. Flying solo felt like a slightly more consensual form of that same approach.

I never wanted to run away, though. I just wanted to get good at the aviation thing, which I understood even then was a moving target, one that didn’t really seem achievable, though I guessed it must be because I knew a lot of people who had done it, and, with one or two exceptions, none of them seemed like superheroes.

I never wanted to be a great pilot. I never dreamed of being Betty Skelton or Amelia Earhart or Jackie Cochran. I just wanted to have fun flying, which meant simply enjoying the experience. And I knew that I needed to get better to move beyond the anxiety of being at the controls and take in the experience in its essence without any fear filter screening out the beauty.

And I got there. It took me many hundreds of hours of flying and many dozens of flights that went not according to plan, but I got there, flying flights in fast and complex airplanes in busy airspace at great heights, sometimes with way too much weather—and crushing it. And my ruling emotion was no longer fear but joy, as well as an overarching feeling of accomplishment and a deep satisfaction at being able to do something really difficult in a way that’s deeply rewarding.

I guess the surly bonds of earth were all inside me all along. As was the joy.

To read all about the latest in credible sightings by accomplished military aviators of aircraft acting in ways no known aircraft can, check out our Mysteries of Flight column in this same issue (August 2019). I won’t reiterate those details except to summarize that these craft appear capable of zero to hypersonically impossible speeds in 10 seconds. The bottom line is that these appear to be some kind of real objects doing observable things that nothing in the known universe can do, performing maneuvers that no known propulsion system would allow, generating extrapolated G forces that no human could come close to surviving.

Let me be clear that I’m not saying I think they’re aliens, just that they’re objects of some kind behaving in ways we’ve never seen before. And those objects had to come from somewhere. I’ll let others vie over where that might be.

As I said, humans can’t pilot these objects as we understand them, and if they’re drones, the only alternative left, well, nobody’s talking about this earth-changing technology, which is exactly what you’d expect them to do, to not talk about it, if they know anything about it, and the smart money is on someone knowing something.

But if we do have the technology to build flying objects that do these kinds of things, and we’re just not talking about it, then it means the obsolescence of human pilots, at least for these kinds of flights.

And, truth be told, our current frontline fighters can pull Gs that would put the best- trained pilots to sleep, a physiological phenomenon known as G-induced loss of consciousness, or G-LOC. In some ways, then, it makes sense to lose the fighter pilot in the fighter planes.

That said, our ability to see and shoot at enemy aircraft well out of eyeshot is so advanced that dogfights are largely a thing of the past. And we use drones these days for ground attacks, which is a controversial topic all its own.

Still, fighter pilots are iconic. Some of the best-known pilots ever were fighter pilots. WWI aces Eddie Rickenbacker and Manfred Von Richthofen, aka the Red Baron, French aviator and near ace Roland Garros, for whom the French national tennis stadium and tournament are named, WWII aviators such as Chuck Yeager, Bud Anderson and Bob Hoover. The list could go on, but all of these pilots and more are icons to aviators like you and me for whom high adventure might be a long cross country to a bucolic strip in the mountains and really good cottage fries.

UFOs, whatever they are, aren’t the harbinger of the beginning of the end for fighter pilots. Their time as lone wolf dogfighting heroes has come and gone. What today’s fighter pilots do is heroic, few would disagree, but it’s not the same (and hasn’t been for decades) as the feats of the aces of yore. Not that they couldn’t do it. Watch the Blues or Thunderbirds one time, and tell me we don’t train incredible pilots. But the mission has changed.

I guess it’s no different from cowboys or wilderness explorers. Their time has largely come and gone, not because there’s no cowboying or exploring left to do but because the world is smaller, and we’ve got new ways to do both of those formerly romantic things in ways that are a lot more effective, far safer and tremendously less glamorous.

It makes me a little sad but more than a little happy at the same time. With all this modern stuff swirling around the universe, what we do—fly in small airplanes all by our lonesome being heroes in our own small worlds of sky and wind and stars—still matters in a really big way. That it matters not to the world at large but at least to our best friends and, perhaps most importantly, to ourselves is all that really matters.

Face it. This flying thing is still way cool, and until they pry our Super Cubs out of our cold, dead hands, well, we’re going to keep on making the magic happen.