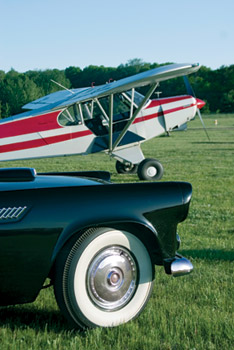 What’s the difference between car (or motorcycle) engines and aircraft engines? It’s a perennial question with a series of stock answers, none of which is sufficient.

Demands differ. It takes 12 to 15 horses to run a small car 60 to 70 mph (cruise speed), and the car’s peak horsepower is 10 times that. Cars never run at full power for more than a few seconds; airplanes may use 100% all the way to cruise altitude. The car spends a lot of its life at a 10% power setting; an airplane at 70% to 80%. Also, part of the drag the airplane engine overcomes is due to a wing’s requirement to produce lift (tires produce all the lift a car needs), so the engine isn’t just moving the airplane through the air, it’s also holding it up. With a helicopter hovering OGE (out of ground effect), this is more obvious, though the principle is the same as in an airplane.

Duty cycles differ. Two thousand car hours typically represent between 70,000 and 100,000 miles, about half the car’s expected life. With a piston-airplane engine, 2,000 hours is about all we expect. On the other hand, the car will run out that mileage in five to seven years; a GA airplane will last 40. Airplane engines are used infrequently, hard and for relatively short times, all of which promote additional stress and wear.

Operating environments are different. While it’s no picnic under the hood of a car, it’s worse inside a cowling. Particularly with air-cooled aircraft engines, temperature stresses and rates of change can be enormous. A 100-degree day on the ground can be below zero in mere minutes at altitude. Rain can shock unshielded air-cooled cylinders and heads. Manual operation of aircraft cooling systems (e.g., cowl flaps) means that these systems are operated suboptimally at best and incorrectly at worst, introducing additional stress.

Operators are different. Finally, we see a factor in favor of the aircraft engine! In general, pilots are better attuned to their engines than are car drivers. Offsetting this advantage, though, is the fact that pilots face more demands from their engines, which require more attention and are fussier about fuel type and grade, throttle and mixture settings (to say nothing of prop settings!), and temperature management, all of which are irrelevant or automatic in modern cars.

Maintenance is different. Modern cars don’t need “tune ups.” Unleaded gasoline, modern electronics, improved metallurgy, and constant design and material enhancements have coalesced into today’s modern engines that require only periodic fluid changes to stay healthy above 100,000 miles. Airplane engines have few of those advantages, but they do receive a professional look at least once a year—something car engines don’t get (and usually don’t require).

So, why? A lot of the differences have to do with the fact that it’s not economically feasible to make changes to existing aircraft engine designs. While a car-engine redesign gets its expenses amortized over many hundreds of thousands (or even millions) of units in a relatively short time, aircraft engines are sold by the dozen. Any change has a greater impact on average cost.

Costs of changes, too, are different. Assuming that all changes are going to be improvements (a huge and not entirely reliable assumption), an auto-engine improvement is largely an internal affair. The manufacturer does its own evaluation, design, testing and appraisal. Expensive, certainly, but that’s the price of progress. An aviation engine builder has all those expenses, plus additional, significant considerations.

An aviation-engine manufacturer needs to explain and justify its changes through the “certification” process with the FAA and various CAAs. Not only are the processes, tests and documentation expensive, but also the time involved can’t be overestimated. These regulators are bureaucracies, accountable to essentially no one, so they work on their own schedules.

There’s also the fact that current designs work. They have proven themselves for the past 70 years or so. We know how to operate them and how to maintain them; we know what weak spots to monitor. They may not be perfect (and they aren’t), but we can live with their needs, much like an old spouse.

So, why change? We change because we have to and because we want to. As fuels change, we need to adapt. As energy costs rise, we want more economical operation. As metallurgy improves, we can save weight, repair time and money by employing better materials.

What can we learn from cars? A hundred years ago, even 60, “aircraft technology” meant “superior.” The Tucker, the most-advanced “production” car of its time, used a 300 hp water-cooled Franklin aero engine right after WWII. Recent history, though, has seen technology going the other way, toward automotive-style metallurgy, higher-rpm engines and gearboxes, automotive-style electronic engine controls, auto-style fuel injection, and adoption of auto fuels, including unleaded gasoline and diesel.

A decade and a half ago, Bob Pond shook up the Reno race crowd with his high-revving race car engines and a lightweight airframe (in his Unlimited Class Pond Racer). Frank Thielert has recently brought automotive technology to aviation, in the form of his relatively tiny (121-cubic-inch, two-liter) diesels, now in the Diamond DA42 and several other aircraft under STC. Rotax, for nearly 20 years, has offered a geared, 1.1-liter, auto-gas-burning (but still carbureted) engine that powers many of the new LSAs. Lycoming and Teledyne Continental Motors (TCM) have models that feature fuel injection, modernized ignition and one-lever operation.

What do we have to do, and what do we want to do? It won’t be long before 100LL disappears. (We’ve been hearing it for 30 years, so it must be true.) Lead is poison; we don’t want to use it when we don’t have to. We still have to use it because it’s the only practical way to boost octane (required by high-compression gasoline engines), and because the majority of aircraft piston engines need that octane to keep running. Though 80/87 worked for a lot of peashooters, sales volume was too low to allow its continued production, so we went to “low-lead” in the 1970s. (Note that 100-octane “low-lead” avgas contains two grams of tetraethyl lead per U.S. gallon, half that of aviation 80/87 and 100/130, but some 18 times that of the automotive premium of the 1970s.)

Eric Tucker, who knows the Rotax engines inside-out, said that auto gas (which is specified for the Rotax engines) and automotive-style (motorcycle-style, actually) oils make a good match, because all the components—engine, fuel, gearbox and oil—are designed to work together. When legislators (who are usually lawyers, not engineers) mandated the removal of lead from fuels, they had no idea of the secondary effects they were setting in motion (or they paid no attention). In addition to the octane-boosting effects of lead, Tucker said, “The designer relied on lead in the fuel to help reduce valve seat and valve wear, but now the old fleet is stuck because it must have the lead, or face expensive changes. Auto-engine oil has wear inhibitors to reduce wear, but it has created wear issues of another kind, such as camshaft and [flat-tappet] lifter issues.”

Tucker offered some advice for leaded-gas users: “Lead, combined with moisture, makes a chemical acid which can burn the bearings and leave pitting in aluminum surfaces. Long periods of nonuse, typical for an aircraft, cause many issues with lead contamination, one of them being the chemical actions that take place. The best practice is to change the oil before storage (draining the acids with the old oil). When people don’t do this, they keep the overhaulers busy.”

In the interest of fuel efficiency, we’ll need to have more-efficient engines. That means not only fuel-saving improvements (electronic engine controls, fuel injection, tighter tolerances, better cooling, improved lubricants), but also smaller and lighter engines. Metallurgy will provide many of the breakthroughs—lighter pistons and rods allow lighter cranks and cases, for instance—but additional fuel-flow, combustion and exhaust-design improvements are still necessary.

Ian Walsh, VP and General Manager at Lycoming (also a Six Sigma black belt), noted that the obvious costs can be reduced, and not only through higher production numbers. “Automotive manufacturers have become best in class when it comes to lean and cost-out efforts,” says Walsh, “because they’ve pioneered lean implementation, Kaizen ‘continuous improvement,’ Six Sigma methodologies and supply-base rationalization and transformation. Aviation is learning the same techniques and process improvements to make innovation more affordable.”

The piston engine will be around for a long time in its present configuration, if for no other reasons than that the installed base is so great and the costs of replacement are so high. New-generation induction, engine control and flow management (both internal and external—combustion and cooling) improvements will become more economical and widespread. Diesel technology, accepted worldwide (and grudgingly in the States), will become more popular as avgas becomes ever more dear. Smaller engines, geared engines, lower-power engines—all are in the near future. In other words, we’ll see progress on all fronts…except in bureaucracy.

Walsh concluded, “We should be excited that aviation engines are becoming more technologically advanced, economical and will undoubtedly become more affordable as automotive thinking plays a more influential role. Competition, in the final analysis, is the best creator of all!”