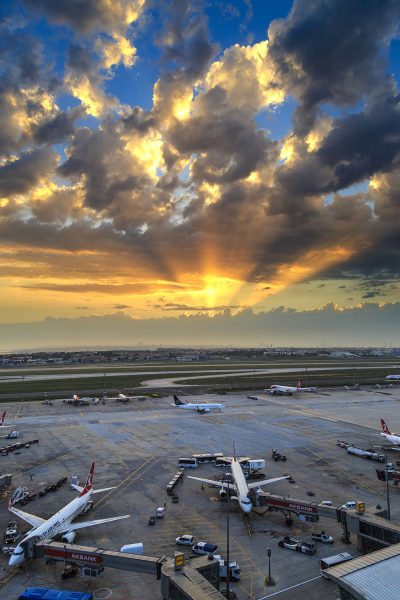 There are a lot of people looking at their future who have thought about a career in aviation. Many of those people, maybe most of them, think about aviation in terms of one job: pilot. The truth is, for every person flying a plane professionally, there are hundreds who are working behind the scenes to keep the flying going, doing everything from managing the business of the flight to its safety to the technical care of the aircraft themselves.

Subscribe today for industry news, reviews and much more delivered straight to you!

Don’t get me wrong. Flying is a great job, and today there’s more opportunity for future pilots than ever before. The forecast is for a million maintenance and piloting jobs over the next 20 years. Again, with every new pilot job, there will be lots of other aviation jobs that need bright, talented and inventive people to make them happen.

I know about piloting because I’m a pilot, and I have been since I was a teenager. I learned to fly in a four-seat plane at a small flight school. Before long, I started on my commercial and instrument ratings. My thought was to build up hours in the cockpit and then go into flying for the airlines or the military. But like a lot of other people I know, I never became a commercial pilot. Instead, I found another kind of aviation job that I loved even more: aviation writing. I have friends who studied aviation to become pilots only to find themselves as successful aviation business managers, entrepreneurs, communications directors, photographers and government administrators. Like every one of them, I got an opportunity to try something different, and I loved it. And I discovered that every skill I’d learned in my pilot training came in handy in one way or another. And I love my job working as a writer and editor of a brand that’s all about personal flying. In fact, loving the job is one thing my friends in aviation and I have in common. They’re thrilled to be working in a field in which every day is different and seemingly everybody you meet is just as happy as you are, and so am I.

There are times when we make big decisions, and a lot of those occasions happen early in our lives. And those decisions create your future in expected and unexpected ways. You already know that what you choose to study is an important decision, a huge decision, on a par with getting married, having kids, picking a place to live and pursuing your passions.

Here’s what we can do for you right now:

Why Picking The Right School Is So Important

Aviation is different than some fields because, in this world, education and training are everything, or pretty close to it, anyway. For some jobs, the requirements make perfect sense. To be an airline pilot, you need to know how to fly a plane (which might help put your mind at ease next time you go flying).

But depending on which career you choose, the training you’ll need can vary wildly.

As an example, let’s say you want to be an air traffic controller. For that, you need an associate’s degree or higher. Then the government will train you on how to be a controller as part of the deal. Sweet. Are there exceptions to the education requirement? You bet. Working in the military offers options for getting training as part of the commitment, but unlike in the military, when you pick your school in the civilian world, you make the choices, not them.

It’s important to make the distinction between training and education. For many aviation jobs, you need a certificate or degree, and for others, you need hands-on training. For some, like flying an airliner, you need both. So it’s important to know ahead of time what you’re going for and what you’ll need to do to get there.

There are other aviation jobs for which you don’t need any school at all, though you do need job-specific training, which most of the time you’ll have to pay for. To be an aviation technician doing work repairing, maintaining and overhauling airplanes and helicopters, you need both a certificate and on-the-job training. Typically, that means getting a certificate called the Airframe and Powerplant ticket (A&P, for short) or at least be working toward one while you have a job in a shop getting your work approved by an aircraft inspector, which is a step up from the A&P certificate. The bottom line is, there’s no degree required, but training costs serious money and takes serious time. How much of either depends on a lot of factors.

All of this is to say that if you want a career in aviation, you need to take several things into account.

Is travel a part of your dream job? If it is, then being an airline pilot is the ticket. That’s all they do! Flight instructors, who are increasingly well paid, base out of one place and seldom need to travel for work. Figure out the job’s travel requirements.

Is a college degree in your future? If yes, then aim for a job where you get credit for a bachelor’s degree. Strangely enough, to be a pilot for one of the major airlines, you need a four-year degree. It can be in child psychology, but they want that piece of parchment. And, yes, someone with a degree in flight sciences will have a leg up on the person with a degree in Latin.

Do you like hands-on work or more strategy-based jobs? Even if you’re not flying, do you want to be directly around airplanes? If so, a dispatcher, the person who routes and schedules flights and checks the weather (among a dozen other things), might not be your gig. They’re all about airplanes, and sometimes you aren’t even based at an airport!

How much money do you want to make? I know the answer to this one is, “a million bucks a year,” and I know that we can’t always name our salaries. But in aviation, you can come pretty close. Want to be a really high earner? Easy, go into management, engineering or being a pilot (with a major airline), put in your time and watch the income climb. Other professions, like flight instructing, are less lucrative, but you get to fly a lot and do an important service for others, and even those jobs are increasingly well compensated. The flip side, of course, is that the high-paying jobs are competitive and often require book smarts and talent.

Is job stability a big deal to you? There are some fields that are more stable than others. For instance, being an aviation insurance broker is a lot more stable than being a factory technician for small planes. Planes will always need insurance, but the numbers of new planes people buy each year vary by a lot.

The takeaway from all of this is that most of these professions take time. Unlike some other jobs, being in aviation more often than not is fueled by people’s passion for aviation, so they’re willing to invest the time and dough to get it done.

Still, the good news is, if you’re not passionate about aviation now, you probably will be. It has a way of infecting everyone around it. I’ve seen people come into jobs because it’s a good job, and by the time they’ve been there a couple of years, they’re learning how to fly, their friends are all in aviation, and they spend their spare time on a regular basis at some cozy little airstrip, hanging with aviation types.

And aviation types are the best, and I’m not saying that because I am one. I’m saying that because I’ve been in the field for a while, and I know so many incredible people who live a life of aviation. They’re my best friends and, in some cases, my family members, too. And I think it’s safe to say that for just about every last one of the thousands of people I know in aviation, we can’t imagine any other way of life.

And the prospects are only getting better.