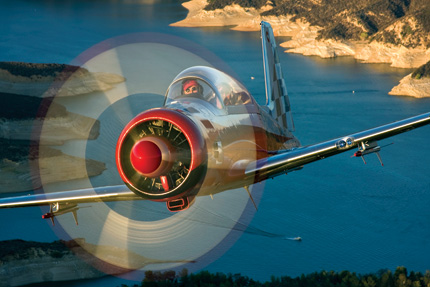 Designed for aspiring warbird pilots who lack the funds for a P-51 Mustang, the Bear 360 has a price tag roughly equivalent to that of a new Cessna 172. Unlike that airplane, however, the Bear probably will attract a crowd wherever it lands.

“When it comes down to it, looks are a lot of what warbird ownership is about,” says Bear Aircraft CEO Skip Holm. Oozing WWII-era Grumman “Cat” styling, the Bear 360 certainly has “the look”: round engine, distinctive fuselage style and short, thin wings. The all-metal, flush-riveted construction offers a warbird’s solid look and feel. And all the metal parts are fully anodized, inside and out, to eliminate any corrosion issues.

Rounding out the Bearcat look is its radial engine: a 360 hp, fuel-injected, nine-cylinder Vedeneyev M14P. On startup, the aircraft billows out smoke from the exhaust, rumbles down the taxiway and thunders into the sky with a commanding presence. Motorstar NA of Romania produces the standard 360 hp engine, as well as the higher-powered, optional 420 hp M14PF and 450 hp M14R; there’s also an option to install an engine from Barrett Precision Engines. Putting the optional oversized race spinner over the three-bladed prop provides the cowl section with a sleek, polished appearance.

The one visual aspect of the Bear 360 deviating from its pure WWII styling, the large bubble canopy, fulfills its mission as a comfortable two-seater with ample room for pilot and copilot. Both cockpits in the tandem seating configuration have full flight controls. The front panel features a full instrument panel for the pilot, and the rear panel is equipped for limited passenger operation. The optional Fw 190 fighter canopy provides an even more dominating presence for the Bear 360. (An illustrated artist’s rendition of the single-seat racer version has the pilot cockpit relocated to the back.)

The well-appointed pilot panel includes Garmin’s GNS 430W and GTX 327 transponder and Dynon’s EFIS-D100 and AP74 autopilot, the latter of which assists on long cross-country legs. Electronics International’s MVP-50 engine monitor tracks what’s going on under the cowl. Electric trim for aileron and elevator is located on both sticks, and the front cockpit has rudder trim as well.

How does a plane like this come into being? Let’s start with aviation legend and retired U.S. Air Force Lieutenant Colonel Skip Holm, who has worked as a test pilot and engineer at Lockheed Skunk Works. Holm is a member of the Society of Experimental Test Pilots, an inductee to the “Living Legend” society and a veteran movie and TV stunt pilot. Also a renowned air racer, Holm has flown Dago Red to win Gold in five Reno World Championship Air Races. He also has flown such famed race planes as Rare Bear, Stiletto and Tsunami. One of this assignment’s biggest thrills was flying with Holm, a smart, engaging pilot with a nonstop supply of stories.

In 1998, Holm collaborated with Sergey Yakovlev, a designer from Russia’s Yakovlev Design Bureau, to create the Bear 360 prototype. Since then, there have been some starts and stops in bringing the aircraft to market, but it’s now in full production out of a high-end facility in Orenburg, Russia. After flying about 300 hours in the Bear 360, Holm has created a set of improvements and upgrades that will certainly benefit owners. As an experimental airplane that’s factory-built, the Bear 360 falls into the experimental exhibition category. This imposes some administrative tasks on a Bear 360 owner; namely, the person must notify the FAA (in the form of a program letter) of any events at which he or she intends to perform. Bear Aircraft will provide owners with an annual program letter; all they have to do is sign and send it.

The Bear 360 has a comprehensive, 41-page checklist that details all normal and emergency procedures, and also includes aircraft spec information such as weight and balance. For the demo flight, our procedures were straightforward. On takeoff, you need to use left rudder instead of the right because the prop rotates opposite of what most of us are used to. You smoothly apply power so that the torque from the M14 doesn’t take you for a ride into the weeds. After you gain a little speed, you bring the tail up a bit and rotate around 80 knots, and then you climb like crazy at 135 knots. Cruise operations are almost nonexistent because there’s no mixture control to manage with this engine. As Holm puts it: “Power setting is more of a prop rpm function instead of a throttle setting.”

In the landing pattern, you slow the Bear to between 100 and 120 knots, get the gear down, set flaps to 10 to 15 degrees, hold about 90 knots over fence and make a tail-low wheel landing at 85 knots, or three-point it at just under 80 knots. A bounced landing, Holm tells me, is one of the few times when flying the Bear 360 can get tricky. Given the torque generated by a big throttle input, the issue is maintaining directional control at an angle of attack that’s at or above stall. This is part of the Bear 360’s checkout.

Simply put, this airplane is pure fun to fly. It’s stout and strong, offering a responsive feel due to the mass-balanced flight controls and the push-pull tube actuation. Because it has no control cables, the Bear 360 has a stick feel that’s smooth and immediate. The nimble aircraft offers excellent opportunities for dogfighting and formation flying. Holm tells me that the 360 can deftly maneuver through canyons or follow rivers, but I’ll definitely leave that kind of flying to pilots who are more talented and brave.

For aerobatics, the Bear 360 has a G range of +6 and -3. It picks up speed rapidly when the nose is pointed down, and it feels good and ready to do anything at 275 knots. Rolls and point rolls are fun and easy with the 180-degree-per-second roll rate, and basic aerobatic maneuvers, such as loops and barrel rolls, are a breeze. Spins are on the list of approved maneuvers, but without a stiffener and production canopy lock on the two-place prototype, Holm wasn’t comfortable performing them on our flight. Stuart Featherstone, Bear Aircraft’s director of sales and marketing, says, “The reality is that the rudder/vertical is a large, typical WWII barn-door area, which makes the aircraft very departure- and spin-resistant, rather than spin-capable.” Holm added, “Although it’s capable of flying aerobatics, that isn’t the main reason to pick the Bear 360. It’s just one of the components that make up the vintage military style of flying.”

During our flight for this article, the Bear 360 demonstrated its formidable formation skills with its authoritative, effective rudder and big prop, which makes it easy to slow down once you’re closing in during rejoin on the lead airplane. The electric trim on the stick imparts just the right feel on the already light controls.

An optional dogfighting package is available and includes a laser and camera installation so you can shoot your friends down and bring evidence of your victory to the debrief. The excellent visibility should make it easy to track your opponent during a vertical rolling scissors. I expect that the Bear would be a great competitor for such Yak airplanes as the 52, 55 and even the 50.

The Bear 360 reaches fast speeds with reasonable fuel consumption in cruise, so getting out to the dogfight area is quick and inexpensive. On takeoff at max power, the aircraft burns a hefty 36 to 38 gph, but once in cruise, it burns as little as 12 to 14 gph at 155 KIAS. With its 76 gallons of fuel capability and optional 22-gallon external tank, the Bear 360 offers outstanding range for cross-country flights. If you don’t mind twice the 100LL consumption, then you can fly at the published cruise speed of 230 knots!
Advertisement

The improvements for the production model versus the prototype I flew include a realigned engine mounting that has been engineered for aerodynamic efficiency. The production model’s pneumatically actuated landing-gear system is hydraulic. Speed brakes have been added to help you when entering the pattern. Brakes are available for the back cockpit, and the tailwheel has been modified and made steerable (similar to a P-51) for ease of ground operations. A crank to slide the canopy shut (“just like the Mustang,” Holm says) has been added and enhances the aura of this beast. The Bear comes with a fixed air step, though there’s also a retractable option (for me, however, stepping up on the tire to the front of the wing is “warbird cool”!).

Options for the production Bear 360 include an external, centerline, WWII-style fuel tank that resembles a bomb in the underbelly. Also available are a high-speed-cruise propeller and extended wing tips. You can customize the aircraft to your desired look and performance with the many options for props and spinners. Standard items include the negative-G fuel tank, dual pylons and removable rollover canopy bar.

A Skip Holm Signature Series option allows owners to collaborate with the designers to create a custom airplane. Holm says he wants to put a 1,000-cubic-inch sprint car engine on one and race it at Reno himself.

The Bear 360 makes for thrilling, exhilarating flying. Holm says the Bear 360 will be welcome on the warbird ramp at Oshkosh, and I hope that turns out to be true. No matter what, an airplane this cool—and for a tenth of the price of the original Bearcat—sounds like a great deal.