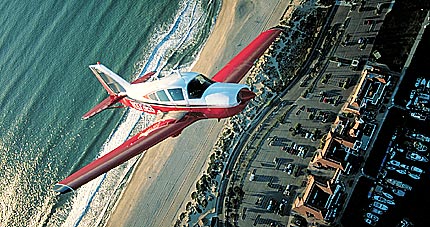 It’s almost inevitable that Italian airplanes are compared to Italian automobiles. You can’t look at the smooth, sculptured lines of a Marchetti SF-260 or Partenavia P68 without thinking of a Ferrari or Maserati.

But Bellancas aren’t Italian airplanes. Although they’re the brainchildren of an Italian-born designer, they’re all-American products, designed and built in the U.S.

Still, most design parameters of the last product in the Bellanca line, the Viking 300, fit the Italian mold. Power is plentiful, handling is better than virtually anything else in the class and the interior is snug enough that you wear the airplane.

Most of all, there is that indefinable Italian characteristic—the handling, the feel. The first Viking 300s were offered in 1967, and there were some 1,700 units produced over the next 30 years. In fact, Bellanca continued in limited production right up through 2001, delivering a handful of handmade airplanes in the last few years, often as few as two a year. Under the direction of a group of seven investors, including long-time chief engineer Andy Vanno, the Alexandria, Minn., plant currently is producing parts and performing major wood overhaul work. Bellanca hopes to go back into limited production of the IO-550-powered Viking—which was introduced in 1996—within the next year or two.

Construction by hand has always been a key ingredient of the Bellancas that few other manufacturers could match. By definition, a wood-and-fabric airplane is constructed by hand. The Sitka spruce and mahogany plywood wings are lovingly assembled from 1,800 individual, pre-formed pieces, some as small as a matchbook.

In fact, the wing has always been Bellanca’s primary claim to fame. A classic airfoil shape, the Viking’s smooth, seamless, 34-foot, Bellanca B wing is probably the closest thing in aviation to a work of art. Ask aircraft designers who truly understand light aircraft construction and performance, and they’ll tell you that, in many respects, Sitka spruce is a better material for building small- to medium-sized airframes than metal or composite materials.

Advertisement
Wood has no memory, as does aluminum, so it’s highly resistant to dings. It’s also more resilient, willing to flex thousands of times without stressing or breaking, and it doesn’t delaminate under high temperature or repeated G-loads. Wood is lighter than metal (only about 250 pounds for a finished Viking wing) and offers an easily shaped, rivetless, aerodynamic surface that’s ideally adapted to a small aircraft wing.

In almost 35 years of production, the wing has never changed. Back in those heady days of the late ’70s and early ’80s, when Bellanca was turning out one Viking a week, I toured the Minnesota factory several times, and I was always impressed with how quiet it was at Bellanca. Working in wood, glue and fabric isn’t a noisy job.

Like many of us who have owned Bellancas of one type or another, Breiman is convinced his Viking is a different kind of four-seat retractable. A motion-picture executive based in Los Angeles, Eric Breiman had always wanted to fly, but like so many other busy professionals whose problem is finding more time than money, his schedule made flight training unlikely. He had been brought up with airplanes, as his father had been a B-29 flight mechanic during WWII, and Eric had inherited the bug.

Finally, in early 2000, he dove in headfirst at Justice Aviation in Santa Monica, Calif., training for his private ticket in a series of Cherokees. Breiman earned his license in only three months and immediately went looking for an airplane to buy. “I had a friend with a Viking for sale,” says Breiman, “and he took me for a demo ride. He had been the only owner of the airplane since it was new, he was an A&P and he knew everything there was to know about his Viking. When I flew with him, I knew I had to have that airplane. The Cherokees were fun, little machines, but the Viking was a big step-up in performance and handling, a Corvette compared to a Corvair.

“The Viking had been very well kept when I bought it,” continues Breiman. “Still, it’s a fabric airplane, and the cover was original—27 years old at the time. I elected to have a complete fabric and paint job done on it, about a $20,000 expense. The good news is that the covering is now fully restored and painted in my colors, and I won’t have to do anything to the fabric for as long as I own the airplane.”

Like most of us who own or have owned Bellancas for years, Breiman didn’t buy his airplane exclusively for looks. He bought it for the way it flies. Vikings and their predecessors have long been famous for control response and harmony that seems almost psychic in nature. Yes, Vikings do have plenty of other talents. They’re quick airplanes with abbreviated climb, they scamper across country at speeds near the magic 174 knots (200 mph) and enjoy good short-field numbers, but their primary claim to fame is their excellent roll rate, fast elevator response and a seeming ability to read their pilots’ thoughts.

As mentioned earlier, performance is competitive with virtually anything in the class. As you can see from the factory comparison chart, Breiman’s aircraft is a 1973 Viking 300A, so we compared it to the only similar horsepower, four-seat retractable available at the time, the Bonanza. For contrast, we also included the slightly later Rockwell Commander 114 and Cessna Skylane RG, admittedly much lower-powered models. We also added the Mooney Ovation and the current Cirrus SR-22 to contrast the old and new.
Advertisement

If many of the performance numbers appear to favor the Viking, accommodations aren’t so generous. One reality about all the Bellancas is that you definitely put on the airplane rather than merely climb into it. The horizontal dimension across the front seats is only 41 inches at the elbows, the narrowest of the lot, so even two medium-sized pilots will rub shoulders. The rear seat is even narrower, relegating the airplane to more of a 2+2, rather than a full, four-place machine.

The cockpit and panel layout are dated, but relatively conventional, although elevator trim is notably unconventional. It’s mounted on the roof and rotates in a horizontal plain to move a vertical trim tab. Clockwise is up. One redeeming factor is that the majority of Vikings employ electric trim, so most of the time, pilots only have to watch the knob rotate.

The fun starts in a Viking the instant you push the throttle full forward for takeoff. Acceleration is among the best in the class (power loading is only 11.1 pounds/hp). The airplane is ready to fly in less than 1,000 feet at about 70 knots and transitions into an effortless 1,200-fpm climb, with hardly a pause to catch its breath.

Vikings retract their main wheels straightforward into the thickest part of the wood wing, and double clamshell doors close over the tires to help smooth the underwing. Looking at the airplane head-on in flight, the fairings hang down a good six inches below the bottom wing surface, but cruise performance doesn’t seem adversely affected by the interruption. One benefit of the retraction system is that emergency gear extension is actually facilitated by the relative wind that helps push the wheels down and locked the second the pilot selects gear down and cracks open the clamshell doors.

Back in the days when Vikings came in your choice of normally-aspirated Continental or turbocharged Lycoming, it was possible to loft a Bellanca to 25,000 feet, but Breiman’s standard Viking and the vast majority of others do their best work at 7,500 to 8,500 feet. The producer’s airplane is primarily a recreational vehicle, employed more for weekend outings than business trips, so he rarely has occasion to cross the Sierra Nevada or the Rockies.

“I’m not usually in a hurry, so I come back to 60% to 65%, to extend range and reduce fuel flow. I’ll typically see 165 knots or more at that setting,” comments Breiman. “If I do need to hustle, I can push the power up a little and manage 170 knots or more, but the burn goes up almost 2 gph for the privilege.” With 75 gallons in two wing tanks and one fuselage container, Breiman’s Viking has about four hours endurance plus reserve at high cruise, five hours at lower settings.

Brieman says his Viking’s best feature is simply its outstanding handling. “I love the way the airplane carves its way through a turn—you need only think about a heading or pitch change, and the Bellanca does it,” effuses Breiman.

Despite the joys of ownership, the producer acknowledges a few niggles. “It’s not the least expensive single to fly and maintain,” he explains. “Although the spruce wing is tough and durable, the fabric does have limited life and can represent a major expense if you need to replace it. That means you almost have to store a Viking in a hangar rather than outside, if you want the fabric to last—another fixed expense. That overhead elevator trim is a little unusual and takes some getting used to, although I’ve come to like it. The airplane’s cabin is loud in flight, but fortunately, the best ANR headsets and an inflatable door seal help solve that problem.”

The Bellanca Viking also is one of the most individual of singles that are flying in the sky today. For Eric Breiman and pilots who are like him, who prefer style with their substance, there is nothing quite like a Bellanca Viking 300A.