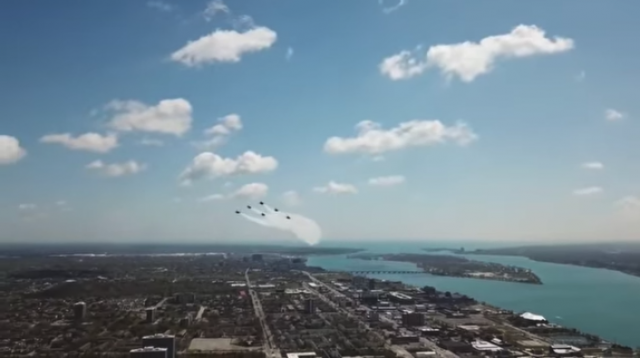 The U.S. Navy Blue Angels had a close call with a drone.Video came out recently of an amazing Detroit area Blue Angels fly by, uploaded by @giolucia to the Facebook and Instagram social media sites. The footage, which shows the Blues whipping by, was soon pulled down, but not before a YouTube site grabbed the video. Unfortunately, that video has also now been removed.

What kind of damage could a collision with a drone have done? It’s possible that the damage would have been minor, but it’s also conceivable that it could cause a catastrophe, with six airplanes flying in very tight formation over a highly populated area. It’s hard to even think about a worst case crash. It would be horrific.

The issue, of course, is that the drone that presumably took the video (its blades are actually in view in certain frames) was allegedly operating in airspace that was restricted to drones (like, duh, right?). No word on what kind of trouble the drone operator might be in, but reports are that the US Navy is aware of the video. The name of the drone flyer has been reported by other sites, but Plane & Pilot was unable to verify the information, so we are withholding it until we do have confirmation.

Drones In Our Airspace