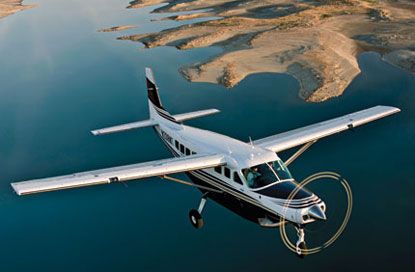 Ride in the back of Brian Linehan’s new Grand Caravan, and you’d hardly know you were traveling in a $2 million single-engine turboprop rather than in a $6 to $8 million corporate twin jet.

Well, okay, that’s a little hyperbolic. You could look out the window and notice that there’s a high wing overhead.

Not a lot of jets with that feature. You also might see the ground below and note that you’re not traveling especially high or fast.

If you’re reasonably astute and facing forward, you might perceive the blur of a prop out front, a dead giveaway that your thrust is courtesy of Bernoulli rather than Whittle.

But lacking those obvious clues and with only the interior accommodations as a guide, you very well might conclude you were traveling in a Cessna Citation X or even a Gulfstream V. You’d certainly never guess you were flying in a 160-knot, single-engine turboprop.

Cessna makes no apologies for the Caravan, and well they needn’t. Other manufacturers can only envy Cessna’s decision to proceed with the model 208 in the early ’80s, despite what seemed a staggering introductory price of $640,000. Buyers apparently weren’t intimidated by the initial high price of admission, and the Caravan has gone on to become one of Cessna’s most successful airplanes.

To date, Cessna has produced some 1,700 of the type, worth at least $2 billion. FedEx alone is currently served by 300 of the biggest Cessna singles, and many more 208s are operated by subcontractors. Dispatch reliability is better than practically any other model, typically above 98%.

Cessna currently offers four models of the 208, the straight Caravan 675 and 675 amphibian, plus the Super Cargomaster and Grand Caravan, the latter two airplanes are stretched four feet (and not approved for the float option). All fly behind the seemingly bulletproof 675 hp P&W PT6A-114A, rated for 3,600 hours between overhauls. 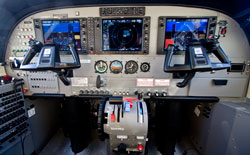 Lately, Cessna has discovered that the airplane they originally envisioned as a flying panel truck has become more of an aeronautical Cadillac Escalade. It seems there are many corporate executives whose travel requirements don’t demand transcontinental range, high Mach numbers or tall altitude. In fact, business airplanes often fly short trips as well as long stage lengths. Several years ago, the National Business Aircraft Association surveyed its members and discovered the average business trip was only about 250 nm. Admittedly, a typical business jet could make that trip in under an hour, but a Caravan could fly the same hop in an hour and a half at a dramatically reduced operating cost. Caravans had long been used in various passenger applications all over the world, but Cessna quickly discovered that not all corporate flyers needed to span continents at 500 knots.

Today, nearly a third of Cessna Caravans are configured for corporate transport rather than pure cargo missions. Brian Linehan, owner of Linehan Aviation (www.linehanaviation.com) in Long Beach, Calif., is a Cessna fan from way back. He owns an original, straight-back 172C along with a recent-vintage 172R, and he purchased his Grand Caravan last year from Tom’s Aircraft (www.tomsaircraft.com) in Long Beach, Calif. Working with Rich Manor, a Tom’s sales manager, Linehan configured the airplane for exactly the mission he had in mind, including a custom interior fitted by Capital Aviation (www.capitalaviation.com) in Oklahoma City.

The 208 makes a stable, predictable instrument platform with low approach speeds, and it’s easily adaptable to both paved and turf/grass runways.

The charter operator spent nearly $200,000 to bring the Caravan’s nine-seat, luxury accommodations to their present state. The result is easily the equal of the furnishings in an Avanti or a Canadair Challenger.

“I looked at several aircraft options before deciding on the Caravan,” Linehan explains, “from a Pilatus PC-12 and a Piper Meridian to a TBM 850. For the money, the Caravan offered, by far, the largest cabin with the most options, though it was obviously slower than the others. In talking to some of our prospective customer base, however, the comfort and luxury far outweighed cruise speed.”

Linehan Aviation uses that attribute to its advantage in chartering the airplane around the Southwestern United States. Brian Linehan says the Grand Caravan has been an instant hit along the West Coast. “Right now, we’re flying about three revenue flights a week,” he says. “We’re promoting the Grand Caravan as the next step down from a Citation, and we’ve found a ready market among corporate executives and small businessmen who don’t need to travel long distances but like to fly with their family or several business associates in their party. We charter the airplane at $1,400 per hour, but you can carry seven people for that price. That devolves to $200 per person per hour, a very reasonable rate.

“The big benefit of the Caravan is that it takes virtually all the hassle out of air travel. We eliminate the long lines for ticket pickup, baggage check, security screening, boarding and all the other inconveniences at both ends of the flight,” Linehan points out. “We can pick you up on your schedule at your local airport or even a private strip, fly your party to virtually any airport in America, transport as much as 1,000 pounds of luggage in the cargo pod to maximize cabin comfort, provide more room than in most jets and fly a much wider variety of missions.”

“We often find our passengers are impressed with the extreme comfort of the airplane. We’ve discovered the low operating altitude, usually 8,000 to 10,000 feet, often serves as more of a positive than a negative,” Reeves brags. “We’ve had several clients comment that it’s an interesting contrast to watch the ground roll by rather than stare down at a gray haze from FL410.”

Linehan and Reeves have found plenty of semi-short-haul traffic in the executive transport business. “We do quite a bit of business flying to Northern California and Arizona,” says Linehan, “and we’re currently considering some contract flying. We’re talking to a number of wineries in Napa about flying clients into their facilities. The Wrigley family on Catalina Island has contacted us about transporting some of their executives around the Los Angeles Basin on a fill-in basis when their airplane is busy.”

Of course, the Caravan’s primary claim to fame has always been its huge cabin, a whopping 62 inches across and more than 48 inches tall. It’s also nearly 17 feet long, so you can carry anything from drilling equipment to caskets to truck engines to people in the available space. Years ago, I ferried a new Grand Caravan from Wichita, Kans., to Johannesburg, South Africa, with seven 55-gallon-drum ferry tanks mounted behind the front seats. The airplane was destined to become a mini airliner to transport photo safari enthusiasts back and forth between Joberg and game camps in the Okavango Swamp region of Botswana. The trip wasn’t the fastest I’ve made to the Dark Continent, but it was definitely one of the most comfortable. (The airplane eventually wound up in high-density configuration, transporting as many as 14 folks at a time around southern Africa.)

Driving a Grand Caravan is a little like aviating with your own apartment directly behind you. It’s an airplane with a total lack of wuss, all brawny strength and muscle and attitude, as appropriate to the backwoods as it is to operating into the LAXs and ORDs of the world.

Versatility is perhaps one of the Caravan’s best features. The 208 makes a stable, predictable instrument platform with low approach speeds, and it’s easily adaptable to both paved and turf/grass runways. Should Linehan and Reeves feel the need for seed, the biggest Cessna single will accommodate willingly. Short-field characteristics with the large flaps and low stall make the airplane ideally suited for the boonies.

In-flight handling is exactly what you might expect of a four-and-a-half-ton flying pachyderm, only quicker. The airplane has almost a locomotive’s sense of straight ahead, but it’s surprisingly maneuverable when you feel the need to twist and shout. The Caravan uses slot-lip spoilers to augment its small ailerons and impart a quicker roll rate.

Though no one will ever mistake a Caravan for a Skylane in appearance, the two fly remarkably comparable, with the Caravan easily the simpler of the two. Approach speeds can be about the same—75 knots—and instrument approaches work out well in either airplane at the usual 90 to 100 knots. Stall speed is right at the FAA upper limit for a production single, 61 knots, and that’s a result of large flaps that span nearly 70% of the wing’s trailing edge and deflect to a full 30 degrees. In combination with tough sprung-steel gear that absorbs all reasonable and some unreasonable loads, the Caravan can sneak into abbreviated strips, improved or unimproved, as short as 1,000 feet. The engine intake is mounted reasonably high, allowing use of max reverse braking thrust down to about 30 knots. Below that speed, the risk of FOD damage on dirt runways increases disproportionately.

Quick cruise isn’t the Caravan’s strong suit, but operators don’t seem to care. The big Pratt & Whitney PT6A doesn’t mind at all if you go to the whip for cruise. Reeves says speed typically settles on 165 knots at max cruise and about 300 pounds per hour (45 gph), and he typically blocks the airplane at 155 to 160 knots. “We use max torque most of the time,” Reeves comments. “Because our stage lengths typically aren’t that long—usually 350 nm or less—it’s uncommon for us to fly legs longer than two hours, so clients rarely complain. Our Caravan is fitted with all the distractions of business jets—DVD screens, stereo systems, computer ports, WiFi—but much of the time, people used to flying high in jets are fascinated with the view of the world passing below.”

Reeves is a CFI who has been teaching for a while, and he’s frankly amazed at the simplicity of flying the 208. “Once the engine is running, the airplane really is pretty much a push-forward-to-go-and-pull-back-to-stop machine. I’m convinced I could solo a typical student in less than 10 hours in a Caravan. The prop stays full forward at 1,900 rpm all the time, the condition lever stays at high idle from takeoff to landing, and the only adjustment is to feather the prop prior to shutdown and pull the condition lever to idle cutoff. You do have to watch the torque limits and temperatures, but other than that, the airplane couldn’t be much simpler,” says Reeves.

“Our airplane is a dedicated executive machine, and that’s the only way we fly it, but if we wished, we could convert it to a freighter, load it with a forklift through the huge aft left cargo door and use the airplane in the boonies. It’s the perfect tool for our mission.”

The airplane has almost a locomotive’s sense of straight ahead, but it’s surprisingly maneuverable when you feel the need to twist and shout.

Linehan Aviation has discovered a different kind of business flying with its Grand Caravan, still operating in the lap of luxury with all the conveniences of a corporate office or a recreation room, but slower and lower. Perhaps surprisingly, that’s the way Linehan’s clients want it.