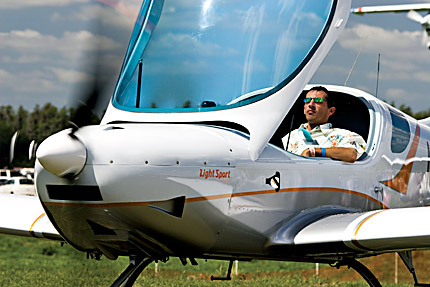 Since the official advent of LSAs at Sun ’n Fun 2005, the type has taken off beyond the wildest dreams of its developers. It seems there’s some kind of LSA on virtually every airport ramp these days. In view of the type’s popularity, LSA designers have looked for ways to push right up against the allowable limits of certification. The type is limited to 600 kg (1,320 pounds) gross weight, can’t carry more than two folks and can’t exceed a cruise speed of 120 knots. Additionally, it must rest on fixed gear and fly behind a fixed-pitch or ground-adjustable prop.

The whole idea was safety. Keep the airplane simple, comparatively slow and lightweight, and there will be fewer accidents (those that do occur will inflict less injuries).

One of the designs that has succeeded in approaching the certification limits is the CZAW (Czech Aircraft Works) SportCruiser, introduced in 2006 and already sold in 17 countries. The SportCruiser is manufactured in the Czech Republic and distributed in the States by Sport Aircraft Works (www.sportaircraftworks.com) of Palm City, Fla. This slick and swept little airplane looks something like the old Glasair FG, but with only a 100 hp Rotax engine out front, its speed is limited to the requisite 120-knot max.

The SportCruiser is produced at Kunovice Airport, where European entry-level airplanes have been built and sold for years. CZAW produces a variety of lightweight amphibious and land-based aircraft, and there’s nothing amateurish about either the conception or construction of its airplanes.

In the case of the SportCruiser, CZAW offers you a choice of a prebuilt airplane or a Quick Build Kit. Should you opt for the latter, you can expect to spend about 400 hours in construction time and save $34,500 in the process, about half of the fully assembled price. The task is strictly one of assembly, not fabrication. (Yes, the CZAW kit does comply with the FAA’s 51% rule.)

Regardless of whether you build it yourself or buy a SportCruiser preassembled by the dealer, this LSA doesn’t spare the amenities. It features electric trim for pitch and roll, electric flaps, a ground-adjustable, three-blade composite prop, in-flight-adjustable rudder pedals and a huge cabin by LSA standards.

The canopy hinges at the front and opens to reveal a generous front office. Roll and pitch control are with conventional sticks mounted well forward of the twin bucket seating positions. Those seats are installed with a transom between them, a function of the 46.5-inch-wide cabin. Headroom doesn’t receive short shrift either. There’s enough vertical space to accommodate a six-foot, two-inch pilot and passenger without brushing their heads against the carbon-fiber, Plexiglas canopy structure. Primary baggage storage is in the turtledeck behind the pilots.

Advertisement
The SportCruiser is all metal, both for simplicity of construction and to help allay the fears of pilots concerned about fiberglass durability. Landing gear may be slickly enclosed with speed fairings that contribute as much as three knots to cruise. The SportCruiser also features something unheard of among other LSAs, wing lockers. CZAW mounts the lockers just outboard of the wing walks. The square lockers are positioned mid-chord at the airfoil’s thickest point and hold 40 fairly flat pounds of whatever per side.

Like most aircraft in the class, the SportCruiser uses a 100 hp Rotax 912, by far the most popular engine for LSAs. (The 120 hp Jabiru 3300 is another option.) Either way, the basic SportCruiser offers a useful load in excess of 550 pounds, which means the airplane can lift full fuel (30 gallons), two 170-pound people and 30 pounds of baggage.

CZAW brags that the airplane can leap skyward at 1,200 fpm, and even if that’s a tad wishful, the airplane can manage an easy initial 1,000 fpm, not bad for only 100 hp. Cruise performance is also impressive, 110 to 115 knots on only 4.5 gph. For those who choose the Rotax engine, endurance is around five hours plus reserve. That’s longer than most folks are willing to sit in an airplane without a pit stop, but for those with the necessary endurance, the SportCruiser will transport them well over the horizon.

Range at high cruise is reminiscent of that in a Skyhawk, 575 nm plus reserve. Pull back the throttle to max economy settings and you can extend that to 640 nm plus reserve. Control response is good in roll, better in pitch and reasonable in yaw. The airplane flies heavier than it looks. There’s not much adverse yaw, and you can carve turns up to about 60 degrees with feet on the floor and the ball still in the center.

This makes long flights not only possible but also fun. The difference between this LSA and some of the others is that you might not mind sitting in a SportCruiser for several hours. The big cabin doesn’t demand rubbing elbows, and there’s plenty of room to move around inside the cockpit. Visibility is excellent in virtually all directions. Overall, the SportCruiser perhaps comes closest to a normal category two-seater.

The SportCruiser’s large wing might suggest a low stall speed, and the airplane’s bottom number is 32 knots. That’s a virtual guarantee of impressive short-field performance. The airplane was originally designed to be operated from grass strips in Europe, so the comparatively long, paved runways of the States are almost ridiculously accommodating. The official numbers are practically in the STOL category, 400 feet for landing and 360 feet for takeoff.

The SportCruiser sells for a base price well below $100,000, but the optional level of avionics sophistication can drive the price well north of that figure. Like many other LSAs (and a few certified airplanes), the basic radio package is based around the Garmin 296/396/496 with the Air Gizmos panel mount. Combine that with a Garmin SL30 navcom and a Garmin 330 transponder plus an intercom, and you have an avionics stack that offers single nav and com, GPS, XM Satellite Weather, terrain warnings and even TIS (Traffic Information Service) uplink. You can also add a number of other boxes to include EFIS, autopilot and rate-of-climb/altitude preselect.

Base price of the standard SportCruiser with the 100 hp Rotax engine is $79,500. CZAW also offers perhaps the ultimate safety feature, a BRS recovery chute, for an additional $4,995. That’s a significant increase to the sales price, and it does reduce your payload, but it may be worth it if it saves your life even once.

Don’t be surprised if an increasing number of the LSAs you see parked and flying at your home airport are SportCruisers. It’s about as close as you can come to a standard general aviation airplane without a type certificate.