Fixed-gear singles have assumed the mantle that once belonged to retractables. Back in general aviation’s modern heyday, the late ’70s and early ’80s, there were at least a dozen retractable models on the market. Today, there are only two, the Piper Arrow and Beech A36 Bonanza.

Retractables no longer have the cachet they had 30 years ago. It’s significant that all three of the four-seaters introduced in the last 15 years have been configured with fixed gear. The Klapmeier brothers’ Cirrus SR20 and SR22, Lance Neibauer’s Columbia 350 and 400 (now the Cessna Corvalis TTX) and the Diamond DA40 Star are all built with the wheels permanently down and laminated.

There’s a reason retractables have gone out of style. Fixed-gear models are generally lighter, stronger, inherently safer, more resilient and far less complex, both to build and to maintain. The simpler gear legs don’t compromise fuel-tank design, can be placed in the optimum location for CG and structural concerns and, when properly positioned and intelligently faired, don’t significantly downgrade the airplane’s aerodynamics. As if all that wasn’t enough, fixed-gear airplanes are less costly to buy, operate and insure.

The Diamond Star XLS is a perfect example of what can be accomplished with a well-designed, fixed-gear, four-seat single. Since its introduction a dozen years ago as the first design of the new millennium, the Star has been a consistent winner for Diamond Aircraft of Wiener-Neustadt, Austria, and London, Ontario, Canada. So far, Diamond has delivered just over 1,200 Stars.

The DA40 uses the Lycoming IO-360-M1A, a chronograph of an engine that’s as durable as anything short of a turbine. The –M1A is rated for 180 hp and 2,200 hours between overhauls, but it’s been known to run well past that standard TBO. In Part 91 operation, some owners have reportedly logged as much as 3,000 hours between majors. That’s reliability practically in turbine country.

The durable, four-cylinder Lyc has roots all the way back to the ’60s, and it has been employed on dozens of general-aviation singles and twins, both in the U.S. and overseas. It’s an engine renowned for a near-Kevlar reputation, good economy and consistent power.

Diamond has gone through several iterations of propeller for the Star, two and three-blade tractor designs of composite and aluminum construction. Today, the choices are the standard, three-blade, composite, MT tractor or the optional, two-blade, semi-scimitar Hartzell, both constant-speed props. Diamond credits the Hartzell with some of the airplane’s impressive climb and cruise performance, and that’s the way our demonstrator was equipped.

Over the last dozen years, the Star has earned a reputation as one of the most efficient and comfortable four-seaters in the sky. I’m reminded of another pair of efficient four-place machines, Roy LoPresti’s remarkable Grumman American Cheetah and Tiger. Both of the latter were fast, quick-handling semi-sportplanes from the ’70s that could outclimb and outrun anything else with comparable power and configuration.

For 2012, the Star delivers performance that’s well ahead of any other production airplane with fixed gear and the same power. The Power Flow-tuned exhaust, standard on all Stars, contributes perhaps two to three knots of cruise all by itself (and that’s not a pipe dream. I installed a Power Flow system on my Mooney seven years ago, and the result was an instant three-knot speed increase.)

California Flying
For this evaluation, Mike Fabianiac of Kansas City Aviation Center (KCAC-West), the new Diamond distributor for California and 10 other states, arranged for a new Star to be delivered to Angel City Flyers on Long Beach Airport in Southern California. Angel City is a Diamond Flight Center with Stars and Twin Stars on its flight line. KCAC-West is in the process of establishing two sales and maintenance centers on the West Coast, one in Hayward and the other in Long Beach.

My Star demonstrator for the day was a ferry-time-only XLS with pretty much everything on the option list installed. From the outside looking in, the Star appears almost dainty, with its carefully upturned wing tips, waspish empennage and T-tail. Don’t let the airplane’s delicate countenance fool you, though. The DA-40 is a tough, carbon-fiber machine, enclosing a 26G passenger safety cell.

In combination with aluminum fuel cells encased between two tough composite spars and airbag seatbelts, the Star enjoys the lowest fatal-accident rate of any general aviation airplane in the industry, .16/100,000 hours. That’s about an eighth of the industry standard. Post-crash fires are nearly unheard of in Diamond’s models, and there’s no record at all of inflight structural failures.

To the numbers. My fully equipped test airplane had an empty weight of 1,860 pounds against a gross of 2,645 pounds (that’s 1,200 kg in Euro-speak). This left a useful load of 785 pounds or a payload of 485 pounds with a full 50-gallon service of fuel. That’s fairly typical of modern four-seaters, two big passengers plus golf clubs or three standard folks with toothbrushes.

Climbing into a Star XLS is a little different than boarding most low-wing airplanes in that everyone boards from the front. You unlatch the canopy and rotate it up and forward, exposing both front buckets and boarding assist handgrips atop the panel. There’s a fixed step just behind the engine cowling, so you climb up onto the wing over the leading edge rather than across the flap. Those relegated to the rear are hardly second-class citizens, as they have their own gull-wing door on the pilot’s side, hinged on the roof and totally separate from the front hatch.

Legroom in all four positions is excellent, though the front seats are fixed to the airframe and not adjustable in any direction, recline, vertically or fore and aft. That’s one reason for the Star’s excellent crashworthiness. The rudder pedals are adjustable to adapt to the pilots’ legs, but seat backs are part of the airplane. Similarly, there are no provisions for short-armed pilots. Consider bringing along a cushion.

Perhaps the first thing you notice when you step over the sidewall and settle into the seat is a stick for roll and pitch control. By today’s standards, when some manufacturers are switching to stylish side sticks and others continue to equip with yokes, a conventional joystick may seem a little retro, especially for a new generation four-seat traveling machine. Diamond felt a conventional stick was the best method of translating the airplane’s smooth, quick control response from pilot input to airplane reaction. The Star uses push-pull control rods (ala Mooney) rather than standard cables, and that contributes a very positive, linear feel to maneuvering.

Overall, the cabin is surprisingly comfortable, partially because it’s the widest part of the airplane. Diamond reshaped the forward-hinged canopy a few years ago to extend the sides vertically and widen the folding hatch wider at the top, resulting in more headroom. Dimensions are 45 inches across at the elbows by 44 inches tall.

The Star XLS employs the full Garmin G1000 avionics suite, now complete with the Garmin 700 autopilot and Synthetic Vision. That’s perhaps only appropriate, as a Diamond Star was the launch vehicle for the G1000 back in 2004 at Garmin’s Olathe, Kan., head-quarters, and the recent addition of Synthetic Vision in 2008 at Sun ‘n Fun also featured a Star demonstrator.

Synthetic Vision is one of those features that sounds like a frill until you use it. It’s a real-time, GPS-derived, computer-based image of the terrain and obstacles ahead, complete with warnings if your altitude puts you in jeopardy. When coupled to a traffic alert system, SynVis will also show the traffic in its proper perspective on the screen, assuming it’s somewhere out in front of you. Pretty obviously, Synthetic Vision doesn’t care about weather, so what you’ll see on the screen won’t be inhibited by poor atmospherics.

There’s no connection between nosewheel and rudder pedals, so ground maneuvering is strictly a function of differential braking. The good news is that you can reverse direction in little more than the airplane’s wingspan. The other news is that virtually all ground handling demands use of brakes, so good braking action and condition are mandatory.

Power-up for takeoff isn’t a major event, but the airplane’s low stall speed brings it off the runway in a little over 1,000 feet. Once in the air, the XLS flies like it should have Breitling instruments and Northrup controls. Though the airplane I flew was built in Canada, it had a distinctly European feel.

Climb is brisk, about 1,100 fpm if you’re doing everything right. On the way uphill, you can’t help noting the excellent visibility. Pilot and copilot sit in front of the wing, so there’s even some limited seeing straight down. There’s Plexiglas all over the place, allowing the pilot the equivalent of a military fighter’s bubble canopy.

Just as with the fighter, however, the Star can have too much of a good thing. On a hot day, the cockpit will heat up quickly, despite two large Wemacs on the panel, two more in the back seat and two overhead vents.

Fortunately, cooler cruise heights come up in less than 10 minutes, and that’s where the Star really begins to show its stuff. Cruise is impressive. KCAC’s Mike Fabianac claims the Hartzell prop boosted cruise about four knots. Add another two knots as a result of the recent gear fairing clean-ups, plus perhaps three knots from the Power Flow exhaust, and you begin to understand the Star’s impressive performance margin over its competition.

Level at 7,500 feet MSL over Catalina Island, with full power and 2,500 rpm (about 75%) dialed in, I saw a TAS of 150 knots. A thousand feet lower at 6,500 feet, speed picked up to 153 knots on about 10.3 gph. Remember, this is with only 180 hp out front and fixed feet beneath. Like practically all Stars, the test airplane was fitted with the optional, 50-gallon, long-range tanks, so a full service should be worth at least 600 nm plus reserve. For those strange folks who like to fly fast airplanes slow, a 55 % setting should yield more like 720 nm. Your mileage may vary.

Stalls are ridiculously gentle, wings level affairs, with moderate buffeting below 50 knots. The Star is certified in the Normal and Utility categories, but it’s not approved for spins. It’s hard to imagine how any pilot who’s simply awake could stumble into one accidentally.

I tried a demonstration of the airplane’s remarkable stability by reducing power to idle, trimming the nose full aft, releasing the stick and watching what happened. After a few oscillations up and down, the Star settled into a gentle 750 fpm mush, wings level, and would have held it as long as I’d asked. In contrast, a full airframe parachute on an SR-20 provides a sink rate of 18 fps, about 1,100 fpm.

Not to worry about structural integrity, either. The high aspect ratio wing imparts a low wing loading, and the long span provides a high glide ratio of 10 to one. The airplane is approved for an unlimited service life, an endorsement not granted many aluminum flying machines. Metal fatigues, composites don’t (at least, not that we know of).

Landing characteristics pretty much follow the stall. The flare is so easily predictable that you can roll the airplane onto the runway with power for a greaser practically every time, or you can full stall it into a short strip. Either way, the Star demands less than 1,500 feet for a full stop.

As one of the newest entries to the general aviation market, Diamond Aircraft’s Star XLS offers performance consistent with the trend in general aviation. At $359,800, the 2012 DA-40 is slightly more expensive than its two primary competitors, the Piper Archer III and the Cessna Skyhawk SP, but that’s the price you pay for extra performance on the same horsepower.

In an unintended homage to George Lucas, the Diamond Star XLS is a Star Wars design that looks like something Luke Skywalker might fly. And you don’t even have to put the wheels up and down. 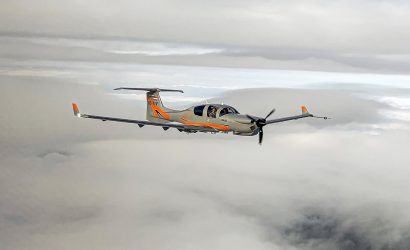