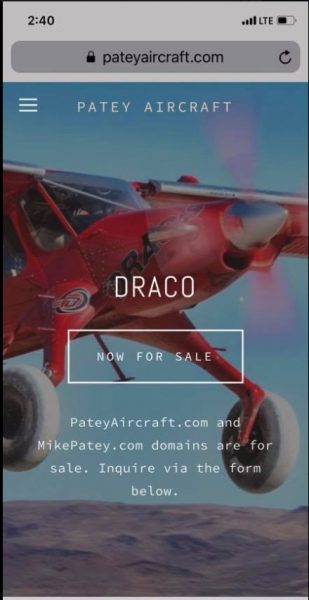 The online world is rampant with cheats and jerks, and one of the good guys in aviation, Mike Patey, is the victim of an apparent online scammer. The unknown person has created a website, now since taken down, that offered Patey’s highly modified Wilga, called Draco, for sale. The only problem is, the website proprietor doesn’t own Draco or have any involvement with it, according to Patey. On his Facebook page, the prolific self-taught and self-employed aviation engineer and entrepreneur said he had been alerted to the apparent scam from friends and quickly followed up. He said that the page appears to have been designed to pressure him into buying the domain name, pateyaircraft.com, which he does not own and, to the best of our knowledge, did not exist until a few days ago. Apparently, as part of that alleged scam, it was offering demo rides in Draco as well as the airplane itself for sale. Patey, who stated in no uncertain terms that he’s the wrong guy to mess with, responded quickly to the attempts with a promise of legal action. He concluded his Facebook message saying that he is “…about as nice and forgiving guy as you will ever meet” but adding that if people try to steal from him or his “family and friends in aviation, the gloves will come off.”

As of Friday morning, the site was still up but had no content.

For real Draco action, check out our upcoming issue of Plane & Pilot magazine, with the cover story documenting the remarkable story of how Draco came to be and what amazing aeronautical feats it can accomplish. After you read the story, you’ll surely want to buy the plane, which is, we emphasize again, not for sale.

One thought on “Draco, World’s Coolest Airplane For Sale Scam”