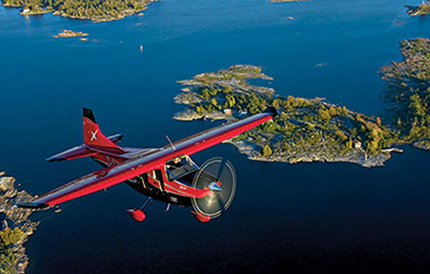 We’re on an Expedition. Two of them, actually. Four of us are aboard the Expedition E350, the new tricycle-gear bush plane from Found Aircraft (www.expedition
aircraft.com). The others in our party are aboard the Expedition E350XC, the conventional-gear variant—this one outfitted with amphibious floats—flying barely 20 yards off our right wingtip. We’re making a short hop to Ontario’s Muskoka Airport, a mere 27 nm southeast of Found Aircraft’s headquarters at Parry Sound Area Municipal Airport, also in Ontario.

Andrew Hamblin, the company’s director of marketing and sales, wants to show off the Expedition’s unimproved-field performance, and Muskoka’s turf strip, with its 6,000-foot primary runway, will be the testing ground. I assume the Expedition will handle the turf with aplomb. After all, the Expedition is a direct descendant of one of Canada’s most legendary bush planes, the FBA-2, which earned its stripes working in the country’s unforgiving north over the last four decades. But at the moment, my attention is directed downward, at the small swath of wooded rocky islands and the shoreline of Ontario’s Georgian Bay region, sprinkled with its genteel vacation homes. That’s the kind of place where the ultimate test of the Expedition’s capabilities will be conducted: whether it’s able to build a market for a new kind of bush plane, one as suited to hauling 55-gallon drums in the wilds as to hauling a family to an upscale resort. A hybrid, if you will.

“The concept of what we’ve done,” explained Andrew, in the back seat of the E350, “is taking the strength of the aircraft and its bush applications, and then refining it and moving it forward. People are expecting a certain level of quality and options in an aircraft for their own personal use, and the Expedition offers all that. The analogy is the Land Rover to the Range Rover.”

Nathan “Bud” Found was the driving force behind Found Brothers Aviation (FBA), predecessor of Found Aircraft. In 1946, FBA was founded with the goal of creating the ultimate bush plane, a design distilled from all the lessons the eponymous bush-flying brothers had learned about the hauling needs and performance capabilities required for bush ops. But the world of business and aircraft manufacturing was perhaps more unforgiving than the rugged Canadian wilderness. Over the next half century, FBA built just 27 aircraft. Yet their strength and performance—on wheels, floats and skis—created a legend. Of course, no one thought much about creature comforts or interior appointments in those days. A bush plane was a working plane. Concern about the pilot’s comfort was mostly limited to making sure the pilot stayed alive. As for passengers, they could just squeeze in among the oil drums, or by the moose carcass.

But that’s not all that bush flying is about today. Prospective buyers are apt to be looking for something that can take them between the bush and civilization while operating comfortably and keeping occupants comfortable in either environment. And perhaps the most dramatic evidence of that is right below us: the E350’s tricycle landing gear.

“Our hard-core bush pilots will scoff at that, but that’s the market,” Andrew said. “For us to move forward and for us to get the necessary (sales) volume, the tricycle gear had to be introduced.”

In fact, the company expects to make three tricycle-gear Expedition E350s for every one Expedition E350XC (Extreme Country). In 1994, Bud made a last effort to get his bush plane back into production. One of the many people responsible for making that happen was Andrew’s father, Tony Hamblin, today the president of the company. Three years later, Found Aircraft began making the FBA-2C1 Bush Hawk and FBA-2C2 Bush Hawk-XP, updated versions of the FBA-2. Among the customers was the U.S. Fish & Wildlife Service (USFWS). (I had the opportunity to spend many hours in the Bush Hawk during a USFWS aerial wildlife survey in Alaska.) “The Expedition is a culmination of all the feedback that we got from our [Bush Hawk] customers,” Tony had told me at the factory. “We put on more power, we made the cabin larger, we changed the interior, we changed the instrument panel. As I said, we listened to what our customers were saying.”

I’ve already explored some of the Expediton’s improvements with Ted Dirstein, Found Aircraft’s chief pilot. Our aircraft, C-FACX, has shown me it’s not just a gussied up, citified version of the Bush Hawk. What sets it apart and makes the Expedition an airplane all its own is power.

On paper, the 315 hp Lycoming IO-580-B1A offers only 15 more horses than the Bush Hawk’s IO-540. But it uses dual exhausts in place of a muffler, increasing horsepower by up to 3%, and the power boost gives the Expedition, at 3,800 pounds, a 250-pound-higher gross weight than the Hawk, bringing useful load to 1,500 pounds. That transforms the Expedition into what was almost a mythical beast in the general aviation world: a true four-place aircraft. With fuel capacity increased to 100 gallons, you can put four 200-pound people, 150 pounds of luggage and full fuel on-board the Expedition; clear a 50-foot obstacle in little more than 1,200 feet; and travel nearly 800 nm at about 160 knots with IFR reserves.

And if first impressions are really what counts, the Expedition’s JATO-like STOL performance will leave pilots suitably impressed. Flying with two, three and four people aboard during our time with the Expedition, it showed excellent short-field capability, and the 20-degree climb angle at Vy (85 knots) helps keep pilots and obstacles away from each other in the bush.

At a 3,800-pound gross weight, rate of climb is an impressive 1,091 fpm. But most of us fly short of fully loaded. Found Aircraft provides performance specs for the E350 at gross, mid and light weight, reducing the need to trace your finger along the lines of a POH chart if you need general-performance numbers. If you can keep your useful load down to 1,150 pounds (350 pounds under gross), count on a 1,400 fpm climb.

The high-lift, low-drag wing is integral to the Expedition’s performance. It’s the same wing the Bush Hawk used, but it’s put to better advantage with the power increase. It’s also the reason for the Expedition’s exceptionally docile stall characteristics. The wing is composed of two distinct airfoils. The inner section has a higher angle of attack than the outboard sections, where the ailerons are positioned. Thus, the inner section stalls first, but the ailerons retain control effectiveness. Dirstein has demonstrated a series of simulated backcountry stall scenarios: an accelerated stall while trying to outclimb rising terrain; a low-speed stall when turning to avoid an obstacle after takeoff; a power-off stall from misjudging the height above the surface when landing on water. In each situation, the stall was almost a nonevent. And the low 54 KCAS stall speed is a safety factor in its own right.

Signature Found Aircraft features remain on the Expedition: Each of the four doors opens 180 degrees, providing easy access and quick emergency egress. (“Go ahead, slam the door, like you would a car,” said Dirstein; it’s a testament to the bush-worthy design.) Each door has an oversized, slightly bubbled window that extends almost down to the floor. This provides unparalleled lateral visibility (and even forward visibility by putting your face into the bubble). I know from personal experience with the USFWS that this is a huge advantage in any operation involving observation, such as surveys and search-and-rescue work. The flat floor, flush doorjamb and quick removable rear seats make it easy to get cargo in and out, and numerous attach points provide for secure stowage.

Yet the interior has been significantly improved. The 4130 steel cage framing the cabin is the same as in the Bush Hawk. But at 52 inches, the cabin is a half-foot wider, achieved by building out from the frame. Where the Bush Hawk took pride in being the only all-metal bush plane, the Expedition has carbon-fiber side panels and doors, reducing both weight and cabin noise. Meanwhile, the roomy two-place backseat has an optional raised, padded divider in the middle, giving the seat the look of an executive aircraft. In a matter of seconds, the entire bench cover can be unsnapped and removed, revealing three individual seats beneath. The center seat can be slid well forward, giving all three in back plenty of elbow room, an arrangement the company calls “four plus one” seating.

And with the rear seats taken out, more than seven feet of open space exists between the pilot and copilot stations—plenty of room to sleep in. You can leave your tent at home when air camping.

On the panel, analog “steam” gauges provide the primary flight instrument displays. An optional glass panel will be available, but not an integrated glass suite, avoiding the time and expense of certifying the installation. Standard panel-ware includes a Garmin GNS 530 GPS/NAV/COM/WAAS and an Electronics International MVP-50 digital engine monitor.

At Muskoka, the Expedition convincingly demonstrated its backcountry heritage on the turf. From the air, the grass looked well-maintained, but Dirstein assured me it was bumpier and more rutted than it appeared. He was right. But the flexible struts on the main gear and the polyurethane pucks acting as shock absorbers on the nosegear have what it takes to handle off-airport operations. The undercarriage feels stiff landing on and rolling over the uneven surface, but maybe it’s good to be reminded that you’ve arrived back in the bush. In a plane like the Expedition, how else would you know? And if you need to get in or out of any tight spaces on the ground, the 300-degree castering nosewheel provides for deft maneuvering.

The FBA-2C3 Expedition E350 was certified by Transport Canada in late June; FAA certification should arrive by the end of the year. The FBA-2C4 Expedition E350XC (Extreme Country) requires land certification testing, and will require more time. Both aircraft are priced at $485,000. Options include floats (straight and amphibious) and skis.

On the morning of our flight, Andrew brought along a friend to show off the new airplane. Christopher Bolton seems like the kind of person for which a hybrid like this was made. He’s a TV writer and student pilot from Toronto who just bought a cottage in the Georgian Bay area. Used to cramming into a Cessna 152, his awe at the Expedition’s comfort and performance was palpable. On our way to Muskoka, as we cruised beside the E350XC, he turned to Andrew. “You must be so proud,” he said. And deservedly so.