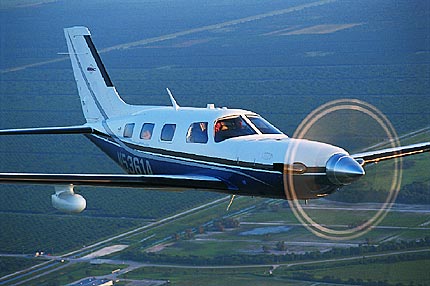 When New Piper first took the wraps off its Meridian, they set some rather lofty performance goals for their first single-engine turboprop. They needed to. Their target buyer was someone who would be moving up from either a high-end piston single or twin. They also wanted the Meridian’s performance and capabilities to attract owners who were already flying older turboprops, like King Airs and Cheyennes, but who may be in the mood for a new airplane that gave them the performance they were used to, while cutting their fuel and engine-maintenance bills virtually in half.

When New Piper first took the wraps off its Meridian, they set some rather lofty performance goals for their first single-engine turboprop. They needed to. Their target buyer was someone who would be moving up from either a high-end piston single or twin. They also wanted the Meridian’s performance and capabilities to attract owners who were already flying older turboprops, like King Airs and Cheyennes, but who may be in the mood for a new airplane that gave them the performance they were used to, while cutting their fuel and engine-maintenance bills virtually in half.

They wanted to wrap it all up in a package that you could take home for around $1.75 million (in 2003 dollars), which would put the Meridian’s sticker at just about a cool million under its chief rival, Socata’s TBM 700. And don’t, for a minute, think that the difference wouldn’t sway a lot of purchase decisions.

“We looked at the TBM 700 and the King Air, and found the Meridian to be a much better value for our needs,” explains Don Catalano, president of Corrate Realty Consultants. “With the prospect of the ‘low-cost’ jets coming on the market, I didn’t think it prudent to spend $2.7 million on a turboprop, not when the Meridian was almost as fast, had superior avionics and was 60% of the price.”

Catalano, who stepped up from a Mooney Ovation, has owned his Meridian since August 2002 and has put just over 200 hours on it. He says that he currently uses the airplane to cover a nine-state area, but because of the Meridian’s added speed and capabilities, he’s planning on adding three more states to his travel plans.

His story of how the Meridian fits his company’s travel needs is exactly how New Piper’s president and CEO Chuck Suma describes the initial goals for the Meridian’s design team. “Our goal was to design a high-performance turbine airplane that really delivers a great balance of capability and value to our owners,” says Suma. “The unique thing about our engineers is that they really know personal aircraft—that’s all we build—so they set out to create a capable airplane that would be easy for a non-professional pilot to fly on business or pleasure.”

Suma adds that, of the 170-plus Meridians already delivered since November of 2000, 80% are owner-flown and the rest are manned by professionals. “That was one of the criteria in choosing our avionics,” continues Suma. “We needed them to be both state-of-the-art and very user-friendly at the same time.” From the beginning, the Meridian has been equipped with Meggitt’s Magic flat-panel displays coupled to Garmin 530s.
Advertisement

While the Meridian is a wonderful airplane, truth be told, its airframe is really a beefed-up Piper Malibu—a fine airplane in its own right. The thing that really sets the Meridian apart and gives this thoroughbred its giddy-up is that 500 shp Pratt & Whitney, PT6A-42A, arguably, one of the most “bullet-proof” powerplants on the planet. The -42A not only gives the Meridian plenty of punch, it also provides that added degree of confidence and reliability that the not-quite-professional owner/pilot will really appreciate. And it delivers the goods to get you up and over the bad stuff in a hurry.

“After years of slogging around at altitudes that put me right in the middle of the weather and flying a lot of night IFR, I yearned for a plane that could take me up to where I could get over the stuff,” says Catalano. “With my Meridian, I’m routinely up there around FL290. Maybe not over all the weather, but most of it, for sure.”

Another benefit that Meridian owner/pilots enjoy is the cool turbine “growl” that you get when the prop is cycled between its pitch ranges. Hey, if you’ve dropped nearly $1.8 million on an airplane, you deserve the ability to announce your arrival.

The Meridian also treats its pilots to a reduced workload. Along with its state-of-the-art avionics suite, it also has a true single-lever engine control. Everything is automatic. The computer sets the optimum propeller pitch to meet your power selection. Push it forward for fast and pull it back for slow. The Meggitt system has also done away with the failure-prone vacuum system and gone with a much more accurate and reliable dual Air Data and Attitude Heading Reference System (ADAHRS). Of course, in the unlikely event of a total failure, pilots can rely on a set of all-electric standby instruments.

“As far as systems management and workload go, my Meridian is much easier to fly than my Ovation,” adds Catalano. “It’s an ideal single-pilot IFR airplane. Even the fuel is automatically balanced. Just make sure you have enough for the flight and the plane does the rest, until you land.”

In fact, when asked about the greatest hurdle facing pilots transitioning from a high-performance single or twin up to Piper’s turbine Meridian, New Piper program manager Stan Riker says, “The airplane flies like you’d expect, only things happen a lot faster. New pilots think the airplane to be much more challenging than it is. Really, the biggest challenge for a competent pilot, other than learning to fly up so high, is mastering all that the Meggitt and Garmin boxes can do.”

Advertisement
When Piper introduced the Meridian, it had made some lofty promises for the airplane’s performance capabilities. And like just about every other new model, it fell a bit short on a couple of points.

“There are three things I’d like to have improved on my Meridian,” Catalano says. “Useful load, the autopilot and the availability of a fuel-heater.”

Catalano isn’t alone in his critique of the Meridian’s shortcomings and New Piper has been fixing those problems. Beginning with the 2003 Meridian model year, the company announced a couple of significant improvements, including a 5% increase in the airplane’s useful load and an updated Meggitt Magic automatic flight-control system.

Suma explains that, while increasing the useful load, 5% may not seem like much. In this class of airplane, that equates to an additional 242 pounds of useful load that a Meridian pilot now has at his disposal, translating to extra carrying capability that he or she can use for more fuel—which would address the range—or more passenger weight—which would address load-carrying.

“The ability to load another 242 pounds into their airplanes is a significant increase,” adds Suma. “And an increase of that magnitude dramatically enhances the usefulness of any airplane.”

Piper was able to achieve this through a combination of aerodynamics and structural changes. They included adding vortex generators to the wings and underside of the airplane’s horizontal stabilizer and making modifications to the stall strips. Those changes will be the hard-core plane-spotter’s clue as to which Meridian he or she is looking at.

Unfortunately, pre-2003 owners, like Catalano, can’t have the added useful load upgrade done to their airplanes. Piper has decided not to offer it as an option—maybe someone else will down the road. “The payload can be an issue, but rarely on my missions,” says Catalano.

Catalano also says that he was happy that Piper had upgraded the Meggitt autopilot and he expects that fix to be available soon. “That’s the only shortcoming of the entire avionics system,” adds Catalano. “The displays and capabilities are incredible and surprisingly easy to use, but the autopilot does have a tendency to ‘wonder’ in some situations.”

Nitpicking aside, for Catalano and, probably, the majority of other Meridian owners, the airplane has proven to be a very solid, capable and reliable means of business and personal transportation. And that doesn’t even come close to the fact that the airplane is just a big-time pile of fun to fly.

And while the very fortunate few of us will ever have the chance to fly the real Meridian, New Piper does, at least, offer the opportunity to enjoy a virtual experience. Just log on to the company’s Website at www.newpiper.com and click on the “Meridian” button. Once there, you can download a really cool Meridian flight-simulation program that will let you “fly” the New Piper’s pride and joy from your computer.